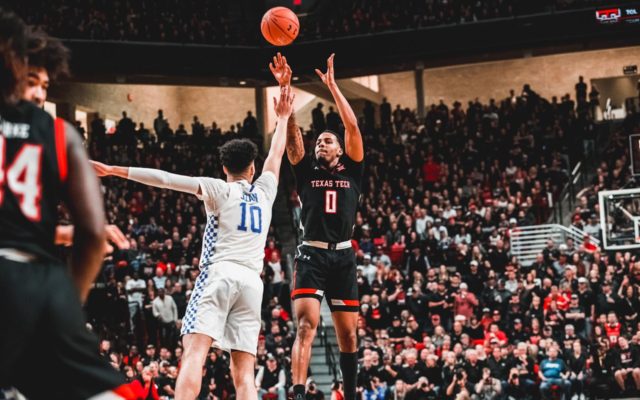 LUBBOCK, Texas – Time ran out on No. 18 Texas Tech in a classic Big 12/SEC Challenge matchup with No. 15 Kentucky leaving with a 76-74 overtime win on Saturday at the United Supermarkets Arena.

The Red Raiders (12-7) had their 54-game non-conference winning streak end after battling back from 10 in the second half to force overtime at 64-64 before the Wildcats (15-4) pulled out the win with Tech committing a turnover in the final second of play. Kyler Edwards led Tech with 18 points, while Davide Moretti went for 15 and Terrence Shannon, Jr. added 12. The Red Raiders, who are now 0-3 in overtime this season, finished the game shooting 42.2 percent but were just 3 of 19 on 3-pointers while Kentucky shot 43.6 percent and knocked down seven.

“It was a big-time college basketball game,” Texas Tech head coach Chris Beard said. “We played 20 minutes; they beat us by two. We play another 20 minutes we beat them by two. Then we play five minutes and they beat us with a couple of free throws. I wish we could have played another five minutes. I felt like it was one of those games whoever had the ball last wins. We were in that situation and it just didn’t go our way tonight.”

Texas Tech will now return to action against No. 14 West Virginia at 7 p.m. on Wednesday at the USA before traveling to play at No. 3 Kansas on Saturday in Lawrence. The Red Raiders are currently 3-3 in Big 12 play and finished non-conference play with a 9-4 record. Tech, which had not lost at home since Dec. 21, 2013 against LSU, ran off an impressive 54 straight including seven this season before falling to Kentucky. TTU is also now 4-3 all-time in the Big 12/SEC Challenge and 3-1 under Beard in the series. Historically, Tech falls to 0-5 against Kentucky and 0-2 in Lubbock.

Kentucky finished the game with a 38-32 rebounding advantage and was 21 of 25 at the free-throw line, while Tech finished at 17 of 23 from the line. Edwards hit two of the three Tech 3-pointers with Moretti making one and TJ Holyfield led the Red Raiders with eight rebounds and also had five points. Jahmi’us Ramsey, who came into the game leading the Red Raiders at 15.5 points per game, was limited to six points while Chris Clarke added eight points and seven rebounds. Kevin McCullar and Russel Tchewa both gave the Red Raiders sparks off the bench with McCullar finishing with six points and Tchewa four.

In overtime, Edwards and Shannon both had four points while Nick Richards led the Wildcats with seven of their 12 points. Richards finished the game with 25 points after going 7 of 10 from the field and 11-for-14 from the free-throw line and Immanuel Quickley added 21 points with four 3-pointers. Richards was 5-for-5 from the free-throw line in overtime for the Wildcats who were 7-for-7 at the line in the extra session.

In regulation, Tech trailed 64-63 before Davide Moretti made one of two free throws to tie it and then missed on a buzzer-beater attempt. The Wildcats took a 72-66 lead in overtime before a pair of Terrence Shannon, Jr. tied it by hitting four straight free throws and then Kevin McCullar tied it again at 74 with a layup. Nick Richards would hit two free throws with 10 seconds to play to take a two-point lead before Tech lost the ball on its final possession as time was expiring.

Kentucky took a 36-34 lead at halftime with Quickley hitting a buzzer-beater from half court to end a first half of runs that saw the Red Raiders shoot 50 percent from the field. Edwards led Tech with 10 points after going 4 of 7 from the field with two 3-pointers, while Shannon had eight points and Clarke led the team with four rebounds and two assists. The Red Raiders were just 2 of 10 on 3-pointers in the first half while the Wildcats were 3 of 6. Down early, Tech took a 12-10 lead with a 7-0 run that ended with a pair of Clarke free throws and had another run of 8-0 to lead 20-16 capped by a Ramsey layup. UK made another of its runs, a 7-0 one this time, to lead 25-22 before Tchewa took over with two straight baskets and a block as Tech led 34-33 before the buzzer beater. Moretti, Clarke and Tchewa each had four points at halftime for the Red Raiders. Quickley led the Wildcats with 13 points with all three 3-pointers, while Richards had eight and Hagans six. Kentucky had a 21-13 rebound advantage at the break.

As close as it could have been.

Hell of a fight.