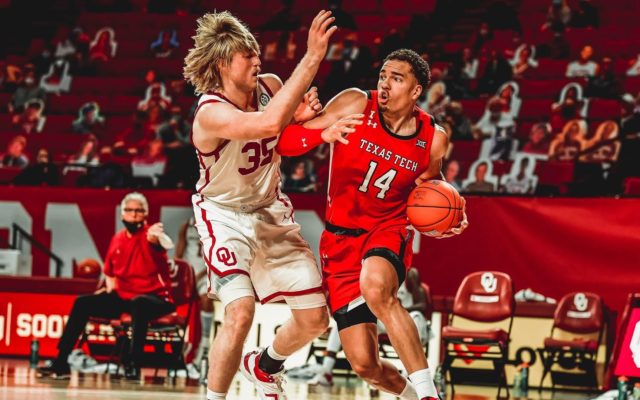 The Red Raiders (7-2, 1-1 Big 12) earned the win with a staggering 40-20 advantage in scoring points in the paint, shooting 49.1 percent from the field and going 9-for-10 at the free-throw line, while the Sooners (5-2, 1-1 Big 12) shot 40.7 percent from the field but struggled by going 17-for-27 at the line. Shannon and Santos-Silva both scored season-highs before fouling out late in the game, setting the stage for McClung to take over offensively where he made a layup for a 65-61 lead with 30 seconds remaining and then knocking down four free throws on the next two possessions. He finished the game 6-for-6 at the free-throw line and with 16 points.

OU had a chance to win the game on the final possession when De’Vion Harmon made his first free throw with three seconds on the clock before missing the second on purpose. Down two, Austin Reaves had a couple chances at putbacks but missed as the Red Raiders escaped with the two-point win in response to their one-point loss to No. 3 Kansas last Thursday in their Big 12 opener.

“I told the guys after the game that this might be one of my favorite wins of my coaching career,” Texas Tech coach Chris Beard said. “I thought our guys responded about as well as we have ever responded following a loss. I was disappointed after that Kansas loss. I could have coached better, we could have played better, guys could have stayed out of foul trouble.”

Shannon went off for his 21 points by shooting 8-for-12 from the field with two 3-pointers after scoring 20 against Kansas. He was just three points away from his career-high of 24 that he scored in his freshman season at DePaul. Santos-Silva had scored 12 points twice this season before scoring his 18 against OU. He was coming off being held scoreless against KU and finished the game shooting 9-for-13 from the floor to go along with grabbing seven rebounds. Jamarius Burton would add six points and four rebounds in his second start of the season, while Kyler Edwards came in as a reserve for the first time since his freshman season and responded by grabbing nine rebounds and dishing out three assists.

“When we played Kansas, Marcus had zero points but when you watch film he didn’t have that many touches,” Shannon said. “This game we got him a lot of touches and he was able to showcase his skills and what he can do when he has the ball.”

McClung is now averaging 15.1 points per game to lead the team, while Shannon is averaging 14.0 points and 4.8 rebounds per game. Santos-Silva is at 8.3 pints and 7.2 rebounds after falling three rebounds away from his third double-double of the season. Shannon scored 20 or more points for the fourth time in his career and in back-to-back games for the first time. Edwards was just two rebounds shy of his career-high 11 rebounds against Grambling earlier this season.

“I think Mac’s got courage,” Beard said. “He’s a guy out there playing to win. He did a great job finishing the game tonight, especially from the free-throw line.”

Harmon led the Sooners with 17 points by hitting two 3-pointers and going 5-for-6 at the line, while Reaves finished with 13 points after shooting 4-for-14 from the field. Brady Manek came into the game lead OU in scoring with over 16 points per game and was limited to just two points on 1-for-7 shooting.

Texas Tech led throughout the game with OU’s only lead coming with the scoreboard at 4-2 just a minute into action. The Red Raiders were playing in their first true road game of the season after going 1-1 in neutral-court games away from Lubbock.

Beard improved to 101-46 as the team’s head coach and the Red Raiders has now won five of the last six matchups against the Sooners.

KEY MOMENTS
Santos-Silva hit a jumper on Tech’s opening possession off an assists from McClung for a 2-0 lead… OU won the tip but a Manek missed shot began its offensive night.
Tech had a 10-4 lead at the first media timeout with an 8-0 run that started with a Shannon 4-point play and then baskets from McClung and Burton. The run ended out of the timeout with a hook shot from Manek.
Edwards drilled a corner 3-pointer off an assist from Shannon to give the Red Raiders a 17-10 lead eight minutes into the game… A Shannon layup off an Edwards assist capped a 7-0 run that gave Tech a 19-10 lead.
Santos-Silva got to double figures and gave Tech a 29-24 lead with 5:19 to play in the first half… He was 5-for-6 from the field at that point in the game.
Burnett hit a 3-pointer and then a jumper just within the arc for the final two baskets of the first half for the Red Raiders who led 40-32… The two shots were Burnett’s first two of the half.
Santos-Silva opened the second half by stripping Manek of the ball for a steal before Burton made a layup to get scoring going for the Red Raiders who led 42-32.
Tech stopped a 7-0 Sooner run with Peavy making a strong defensive play against Reaves and Shannon stealing the ball away and racing down the court for a fast break layup… He followed it on the next possession with an and-one to give Tech a 51-45 lead with 12:11 to play and hit another 3-pointer for a 54-50 advantage.
McClung got into double-digit scoring with a layup that gave Tech a 58-54 lead with 5:31 on the clock.
Santos-Silva gave the Red Raiders a 63-55 lead with back-to-back baskets with 2:40 to play… He would foul out on the defensive side of the court with 2:33 remaining to finish with 18 points and seven rebounds.
Shannon fouled out on the next defensive possession with 2:11 to play on a block call… Shannon finished with 21 points.
McClung gave Tech a 65-61 lead with a layup (30 seconds remaining) in response to a Gibson 3-pointer for the Sooners on the other end.
McClung scored the final four points of the game for the Red Raiders at the free-throw line, including knocking down the final two with six seconds remaining.
With three seconds to play, OU’s Harmon made one free throw before missing the second on purpose… Reaves grabbed the rebound but missed as time expired.
HALFTIME REPORT
Texas Tech took a 40-32 lead into halftime led by Santos-Silva who had 12 points and four rebounds, while Shannon had 10 points on 4-for-7 shooting. McClung had eight points and led the team with three assists and Burnett had five points coming with a 3-pointer and jumper on the final two possessions. His second basket gave the Red Raiders their largest advantage of the half at 40-30 before a Reaves layup. Edwards, who came off the bench for the first time this season, led the Red Raiders with five rebounds and also had three points and two assists in the opening 20 minutes of play.

Tech finished the first half shooting 58.6 percent from the field, 3-for-3 at the free-throw line and had two 3-pointers. The Red Raider defense limited OU to 1-for-4 shooting from beyond the arc. Reaves led OU with seven points, while Manek had only two at the half on 1-for-6 shooting. The Red Raiders owned a 20-10 scoring advantage in the point.

Tech has now led at halftime in seven of nine games played and have scored 40 or more in four games at the break. The Red Raiders scored 57 at halftime in their season opener against Northwestern State for the season-high.

UP NEXT: Texas Tech will take a weeklong break from competition during the holiday before returning to begin a three-game home stand starting against Incarnate Word on Tuesday, Dec. 29. The Red Raiders then resume Big 12 play against Oklahoma State at 3 p.m. on Saturday, Jan. 2 and against Kansas State on Tuesday, Jan. 5 at the United Supermarkets Arena. Tech is currently 5-1 on its home court this season and 68-10 under Beard at home.