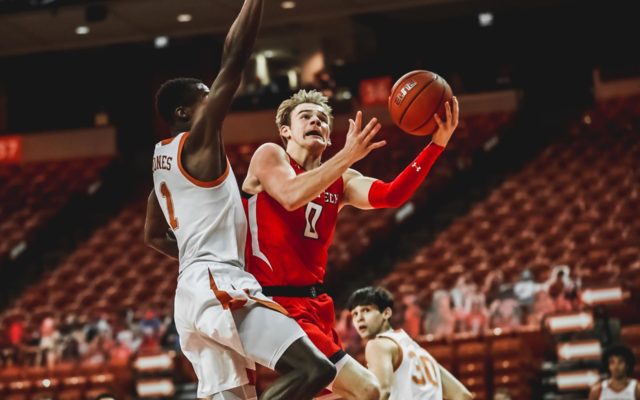 AUSTIN, Texas — Texas Tech junior Mac McClung brought the ball up the court and drilled a jumper with 3 seconds remaining to lift No. 15 Texas Tech to a 79-77 win at No. 4 Texas on Wednesday at the Frank Erwin Center. The win was the first top-5 victory on the road for the Red Raiders in program history and the third straight victory for Tech on the Longhorns’ home court after snapping a 22-game losing streak in Austin.

Texas (10-2, 4-1) led almost the entire game and a blistering start against one of the top defensive teams in the country had the Longhorns in control before a sloppy finish and a flurry of late Texas Tech 3-pointers snatched the win for the Red Raiders (11-3, 4-2). Tech was down 48-38 at halftime, making it two straight years that the Red Raiders overcame a double-digit halftime deficit at UT for a win. Last season Tech trailed by 12 before storming back for the win.

McClung scored a season-high 22 points in the victory, while Kevin McCullar finished with 16 points and eight rebounds. Terrence Shannon, Jr. added 14 points and six rebounds and Marcus Santos-Silva finished with 12 points and four rebounds. McClung was 6-for-14 from the field and 8-for-10 at the free-throw line for the Red Raiders who went 22-for-28 at the line.

McClung’s shot was originally ruled a 3-pointer before a video review. Texas had a final chance, but Matt Coleman’s desperation 3-pointer never came close to the basket. Coleman also missed a shot in traffic for the lead with 17 seconds left.

Texas Tech returns to action against No. 2 Baylor at 3 p.m. on Saturday at the United Supermarkets Arena. The Bears (11-0, 4-0 Big 12) are coming off a 67-49 win over TCU last Saturday before having their game against West Virginia that was scheduled for Tuesday postponed due to COVID protocols.

Andrew Jones had 20 for Texas, but scored just two points after halftime as the Red Raiders shut him down. Jericho Sims added 16 for Texas, but was just 6 of 14 on free throws, with two key misses late.

Texas led 77-73 after Courtney Ramey’s 3-pointer with 1:40 to play. McClung then made two free throws, Sims missed two free throws for Texas before the Red Raiders tied it when Ramey got sloppy passing the ball inbounds, creating an easy tying layup for Tech’s Terrance Shannon. McClung then buried his long shot from the right wing.

Texas Tech has roughed up the Longhorns in recent years with six wins in seven matchups, including three in a row in Austin. The latest was tense from the start. Both teams were whistled for technical fouls in the first half.

The last time these teams were supposed to play, they were pulled off the court during warmups at the 2020 Big 12 tournament in the early stages of the coronavirus pandemic. At the time, it was viewed as a pivotal game for Texas coach Shaka Smart, who was facing intense speculation that he could be fired.

McClung stepped back and drilled a shot with 2.2 seconds on the clock to give Tech a 79-77 lead.

Edwards made a steal on an in-bounds play and found Shannon for an easy layup to tie the game at 77 with 36 seconds to play.

Tech took its first lead of the game at 71-69 with Edwards hitting a 3-pointer off an assist from Shannon with 3:51 remaining… Tech was on a 6-0 run to take the lead before Sims hit a pair of free throws for the Longhorns.

Down 10 at halftime, Tech came out of halftime and got the first two baskets from McCullar and Santos-Silva. Shannon would follow two possessions later by hitting a 3-pointer to cut the deficit to 51-45 and take his point total to 12 (2h, 15:53)

Tech trailed by only four after a Santos-Silva fastbreak layup… Texas responded though, pushing the lead back to 10 before McClung made it 59-52 with his second 3-pointer of the game (2H, 11:26).

An and-one by McCullar following a floater in the lane by Burton cut Tech’s deficit to 62-60 with 9:36 on the clock… Texas responded with a 5-0 run.

Santos-Silva scored Tech’s first points of the game on the third possession off an assist from McCullar to give the Red Raiders a 2-1 lead.

McClung banked in a 3-pointer to stop a 8-0 Texas run and cut an early deficit to 9-5 (1H, 15:27) McCullar hit a jumper that was followed by two McClung baskets for a 6-1 run by the Red Raiders to cut UT’s lead to 17-13 seven minutes into the game… UT responded with a 5-0 run of its own before a pair of Shannon free throws.

McCullar hit a 3-pointer to cut the deficit to 33-28 with 5:31 remaining in the half but was subsequently called for a technical foul… Texas scored four straight to take a 37-28 before a McClung jumper made it a seven-point game.

Tech was down 37-32 after a pair of Shannon free throws before a 7-0 Texas run that was capped by Andrew Jones hitting a 3-pointer and jumper for the Longhorns.

Texas led by as many as 12 on three occasions in the first half.

Tech trailed 48-38 at halftime with the Longhorns shooting 50-percent from the field and going 8-for-14 on 3-pointers. McClung led the Red Raiders with 13 points at halftime, while Shannon had nine and Santos-Silva had six. Edwards led the team with four rebounds at the break but had not scored. McClung was 4-for-7 from the field and 4-for-5 at the free-throw line. McCullar had five points and two rebounds, but also three fouls at half. Tech was shooting 37.0 percent and was just 2-for-8 on 3-pointers. The Red Raiders were 16-for-19 at the free-throw line at the break while Texas was 10-for-17. Texas also had a 22-14 rebounding advantage through 20 minutes of play. The 48 points were the most an opponent has scored against Tech in the first half with Houston and Oklahoma State both hitting for 37 for the previous high.