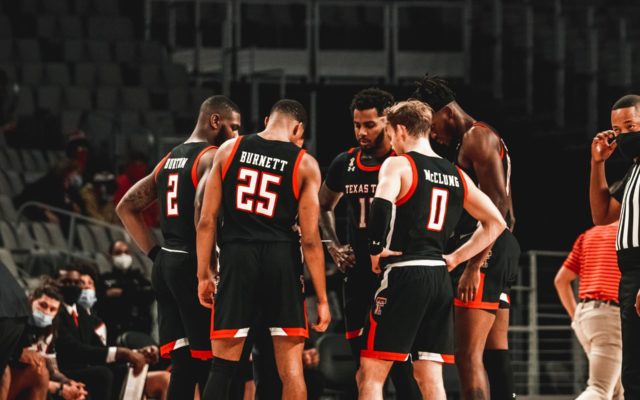 FORT WORTH, Texas – No. 14 Texas Tech cut a 20-point deficit down to seven against No. 17 Houston in the second half but was unable to hold off the final Cougar charge as the Red Raiders fell 64-53 on Sunday at the Dickies Arena.

Texas Tech will return to action against St. John’s (2-0) at 8 p.m. on Thursday in the Big 12-BIG EAST Alliance at the United Supermarkets Arena. The Red Raiders fell to DePaul in overtime in the inaugural year of the Alliance last season in Chicago.

Mac McClung led the Red Raiders in scoring for the third straight game after going for 16 points, despite shooting just 3-for-11 from the field. McClung finished the game 10-for-14 from the free-throw line but was 0-for-6 on 3-pointers. Micah Peavy added 12 points by going 6-for-8 from the field and also had four rebounds, while Kyler Edwards led the team with five rebounds and added five points and three assists. Jamarius Burton led Tech’s reserves with six points and Terrence Shannon, Jr. finished with five points and four rebounds. Marcus Santos-Silva was limited to five rebounds and four points after opening the season with two double-doubles.

Marcus Sasser scored a game-high 17 points for the Cougars with three 3-pointers and Tramon Mark joined him with 11 points off the bench.

Houston led by as many as 20 points in the second half with a 53-33 lead after a Marcus Sasser 3-pointer with 12 minutes to play. Tech would respond though, going on a 11-0 run that started with McClung free throws and capped by a Peavy dunk to take the score to 53-44 with 7:21 on the clock. The Cougars ended the 11-0 run with a pair of free throws. The Red Raiders would get back to single digits with a Shannon steal and dunk and got as close as they would on the night by cutting it to seven with McClung sinking two free throws with 5:30 to play. UH had a 6-0 run to take it back to a 13-point lead and end the hopes of a comeback.

The Red Raiders trailed 37-19 halftime committing 12 turnovers and being limited to just 33 percent shooting, including going just 2-for-9 on 3-pointers. Tech cut an early deficit to 6-5 with a Shannon 3-pointer before Houston exploded to take a 27-9 lead. The Red Raiders fought back with a 5-0 run with an Edwards 3-pointer and Santo-Silva second-chance basket to make it 29-18, but the Cougars responded with a 6-0 run of their own to take a 35-18 lead and then made it an 18-point halftime advantage with a pair of Gorham free throws with 1:37 remaining. Houston finished the first half shooting 43.8 percent from the field and went 5-for-14 on 3-pointers.

Peavy led Tech with six points in the first half after going 3-for-4 from the field, while McClung had five and Shannon and Edwards had three each. Sasser led the Cougars with 10 points in the opening 20 minutes after hitting two 3-pointers and Gorham had seven points. UH had an 18-13 rebounding advantage at the break and only seven turnovers. A freshman from Duncanville, Peavy has now scored in double figures in two of three games to begin his collegiate career after also having 14 in the opener against Northwestern State. McClung leads the team with 18.0 points per game going into Thursday’s game against St. John’s which plays Boston College on Monday night.

Texas Tech will return to the DFW area for another non-conference, neutral-court game in two weeks to play Texas A&M-Corpus Christi on Saturday, Dec. 12 at the Comerica Center in Frisco.