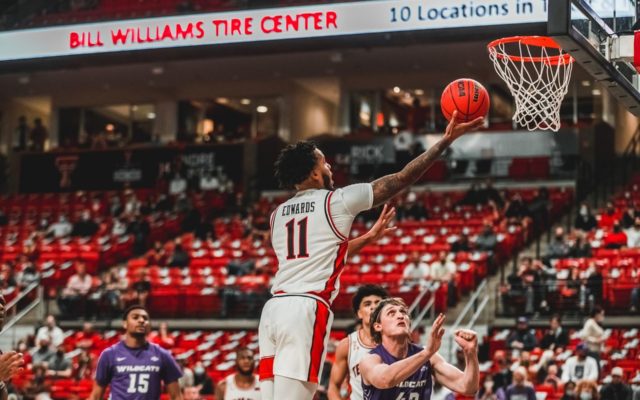 LUBBOCK, Texas – Kyler Edwards scored 19 points and grabbed seven rebounds to help lead No. 17 Texas Tech to a 51-44 non-conference win over Abilene Christian in a game where the Red Raiders made 25 free throws and forced 22 turnovers on Wednesday at the United Supermarkets Arena.

Tech (5-1) led by as many as 14 points in the first half and by a 23-14 margin at halftime, but saw the Wildcats (5-1) come back in the second half and take a 36-35 lead. The Red Raiders would respond though, mainly at the free-throw line where they finished the second half shooting 20-for-25 at the stripe to overcome shooting 27.9 percent from the field after coming into the game at 48.4 percent. Tech finished the night 25-for-37 on free throws, while ACU was 6-for-9 in its first loss of the season.

“They gave us all we could handle tonight,” said Texas Tech coach Chris Beard who earned his 99th win as the Red Raider head coach. “We were fortunate to get to that free-throw line tonight and make some shots but I think our guys earned the right to get to that free throw line, we weren’t trying to get fouled if that makes sense. We knew what we were getting into. I told the guys all week, ‘These guys will play 40 minutes, if we get up, they are going to play 40 minutes. If they punch us up a little bit, they are going to play 40 minutes’ and that’s exactly what happened. We basically found a way to win tonight from the free throw line when other areas of the game weren’t working for us.”

Tech improved to 26-12 all-time in the series against ACU that dates back to 1926 with 13 straight wins. Beard is now 3-0 against the Wildcats.

Edwards was 9-for-10 at the free-throw line in the game and 7-for-8 in the second half. Coming off a double-double on Sunday against Grambling, Edwards led the team in scoring and rebounding for the second straight game and also had two steals in 40 minutes of play. A junior from Arlington, Edwards went 7-for-8 at the line in the second half where he scored nine of his 19 points. He is now averaging 11.7 points and 5.3 rebounds per game along with leading the team with 22 assists this season.

“With one of our best players out, I feel that I have to be a more vocal leader,” Edwards said. “I have to be a leader overall. The team needs it and I think it helped. They had really scrappy guards. We were careless. I think we were careless with the ball. As players, we didn’t execute. They were in the bonus and we made a couple of bonehead fouls. We had them on defense, but we made a couple of bonehead fouls and they got those free throws.”

Nimari Burnett scored in double figures for the second consecutive game after going for 10 points. Burnett, who went for 12 against Grambling, was 8-for-10 at the free-throw line and would also have three steals and four rebounds. He leads Tech with 14 steals this season with nine in the past two games. Marcus Santos-Silva and Mac McClung added eight points each, while Jamarius Burton led the team with three assists in his first start in place of Terrence Shannon, Jr. who missed the game due to injury.

The Red Raiders were limited to just 27.9 percent shooting in the game and were 2-for-15 on 3-pointers, while ACU shot 35.6 percent and 6-for-18 on 3-pointers. The defensive battle saw Tech score 17 points off turnovers and have an 11-1 advantage on fast-break points. McClung, who was held scoreless in the first half for the second straight game, had his streak of five straight games end after going 1-for-11 from the field. He now leads the Red Raiders at 15.7 points per game this season after finishing the game against ACU by going 6-for-7 at the free-throw line in the second half.

Coryon Mason led ACU with 14 points after going 5-for-8 from the field, while Reggie Miller had eight points and two steals. The Wildcats came into the game averaging 24 turnovers forced and were able to get 16 against the Red Raiders.

Texas Tech led 23-14 at halftime on the back of a 19-2 run after holing ACU to only 5-for-21 from the field, 2-for-9 on 3-pointers and forced 13 turnovers. The 14 points were a low for the season through six games for an opponent and the lowest since Northwestern State scored only 10 at halftime back in 2018. The Red Raiders took a nine-point lead into the break despite being limited to 32.0 percent shooting and going 5-for-12 from the free-throw line. Edwards led Tech with 10 points, including hitting two 3-pointers and going 2-for-2 at the line. Burnett added five with one basket and three free throws, while Burton had four points and led the team with three assists. Tech was only 2-for-8 on 3-pointers in the first half.

Texas Tech will return to action at 1 p.m. on Saturday against Texas A&M-Corpus Christi at the Comerica Center in Frisco. The Islanders are currently 1-3 on their season going into a Thursday night game against UT Rio Grande Valley in Corpus before travelling to DFW to meet up with the Red Raiders. Tech is 0-1 in neutral-court games this season after a 64-53 loss to No. 7 Houston last month in Fort Worth.

ADDITIONAL QUOTES – Chris Beard
On the defensive performance: “For parts of this game, ACU was the more aggressive team. That is disappointing for us. That is not our objective. With that in mind, you do things to make your team more aggressive. Coach Adams did a great job tonight. Our defense was elite in the first half, holding them to 14 points and a low percentage. Second half, there were some possessions we would like to get back. Overall, our defense was what won the game for us tonight.”

On Jamarius Burton: “My expectations for JB is to be one of the best guards in college basketball. He works hard, he is smart, he is talented, he can shoot, he can do it all. We aren’t going to be able to beat the (teams) we need to beat when one of best players has six turn overs. He would be the first to tell you that. We are going to get back in the film room to grind it out and get better. From the moment we signed him to now, my expectations for JB is to be special; to be an All-Big 12 player, to be a pro one day. He is just that good. We just need to find the consistency. He puts in the time and isn’t going anywhere. It won’t be long before he is sitting here talking about a 10-assist game.”

On overall game performance: “This type of game makes both teams better as the year goes on. (ACU) took us out of a lot of things we normally like to do. We need to learn how to combat and prevent that with secondary game plans. Our guys did a good job of that tonight. Tonight, we play against one of the best defenses in college basketball. They are a tough defense to score against, scrappy. There were all types of things to learn from; we got better tonight because of this game.”