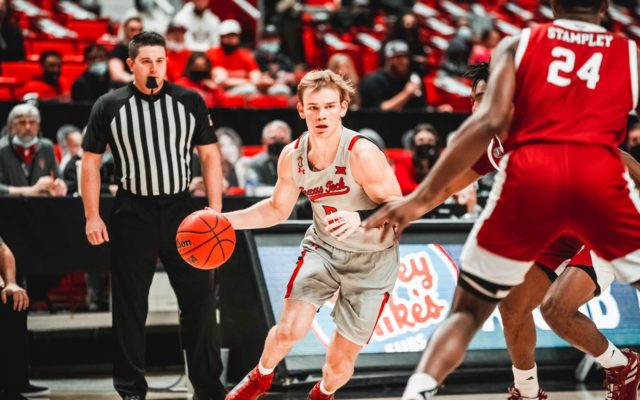 LUBBOCK, Texas – Mac McClung had 20 points and five assists, while Kyler Edwards and Terrence Shannon, Jr. joined him in double figures to help lead No. 17 Texas Tech to an 80-46 non-conference win over Troy on Friday at the United Supermarkets Arena.

The Red Raiders (3-1) finished the game shooting 54.9 percent with 20 assists on 28 made shots in a game where they limited the Trojans (1-2) to only 34.0 percent shooting from the field and 2-for-20 on 3-pointers. Tech and Troy met up for only the second time ever after the Red Raiders had their previously scheduled game against St. John’s canceled.

Texas Tech will now host Grambling State at 1 p.m. on Sunday and Abilene Christian at 6 p.m. on Wednesday to complete a three-game home stand.

McClung led Tech scorers for the fourth straight game after going 8-for-13 from the field with a season-high four 3-pointers, while Edwards had a season-best 14 points after also knocking down four 3s. Edwards finished the game 4-for-5 from beyond the arc for the Red Raiders who went 11-for-19 on 3-pointers in the 34-point victory. Shannon added 13 points with four baskets and going 5-for-6 at the free-throw line. He led the team along with Micah Peavy with five rebounds in a game where the Trojans had a 33-31 rebounding advantage. Peavy finished the night with five assists and five points, while Nimari Burnett and Tyreek Smith both scored seven.

“We got some offensive from our defense tonight,” Texas Tech coach Chris Beard said. “In the Houston game, we only had two baskets off our defense. That is just not the way we play our game or how you play in the Big 12. To get to a certain place on the board in this division, you have to get a certain number of points off your defense. There isn’t a single offense in our league, or in college basketball, that can handle 100 percent of the scoring load. We want to wish Troy University and Coach Scott Cross the best this season. We have worked really hard together these last couple of days to pull this game off. We are appreciative of them and will be pulling for them the rest of the season.”

The Red Raiders led 47-22 at halftime after shooting 64.3 percent from the field, 5-for-8 on 3-pointers and 6-for-8 at the line. Tech finished the game scoring 31 points off 22 turnovers by the Trojans while committing only 13 turnovers in the game. Avery Benson came off the bench to provide excitement, hitting a 3-pointers and making a highlight-reel block in transition. The Red Raiders finished the game with a season-high eight blocks after only having six total coming into the night, getting back in the win column after falling to No. 10 Houston last Sunday.

“Every season is a journey,” Beard said. “The last team that went undefeated in college basketball was under Coach Knight; and I don’t think that will happen again in my lifetime. You are going to get knocked around and come up short on the score board sometimes. It is all about how you respond. For us, the response started Sunday night after the game. We went back to work mentally. We’ve had a couple days of great practice. The biggest thing internally tonight was those 20 assists. There was a little too much one on one against Houston, but they do make you play that way. Tonight, we got back to Texas Tech basketball. We were moving the ball around. With 28 baskets tonight, 20 of those were assisted. That is exactly how we want to play.”

McClung and Shannon were both in double figures at halftime with McClung dropping 17 on 7-for-10 shooting and Shannon with 10 points. McClung was 3-for-5 on 3-pointers in the half to lead the Red Raiders who went 5-for-8 from beyond the arc in the half. Burnett added seven points, two blocks and two steals in the half and Peavy and Edwards had five points each. Edwards and McClung each had four assists in the half where Tech recorded 13 assists on 18 baskets. The Red Raiders broke the game early with a 17-0 run that gave them a 29-9 lead 11 minutes into the game. McClung started the run with a 3-pointer and would score eight points in the run that included baskets from Smith, Shannon, Burnett and Peavy. The Red Raiders, who had five blocks through 20 minutes, finished the half shooting 64.3 percent and limited Troy to just 38.5 percent, including just 2-for-9 on 3-pointers.

“I think we showed maturity,” Smith said. “We knew that we played bad against Houston and we knew we had to make a statement tonight. I feel like we did a really good job at doing exactly that.”

McClung matched his season-high after also scoring 20 in the opener against Northwestern State and is now averaging 18.5 points per game.