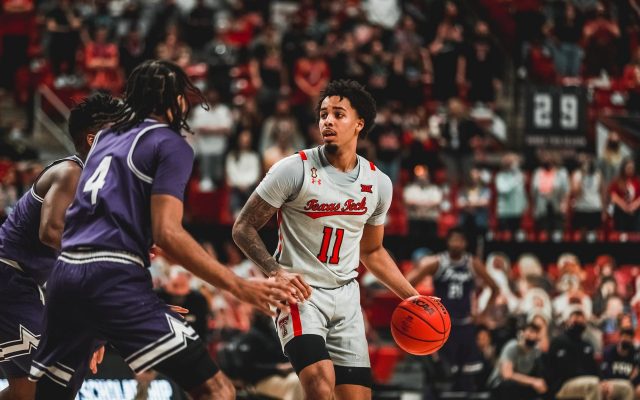 LUBBOCK, Texas – Texas Tech junior Kyler Edwards scored a season-high 20 points with four 3-pointers to help lead the No. 18 Red Raiders to a 69-49 win over TCU on Tuesday at the United Supermarkets Arena.

The Red Raiders will host Iowa State at 6 p.m. on Thursday in their home finale at the USA before finishing the regular season at 3 p.m. on Sunday at No. 3 Baylor in Waco. Tech, which is now is now 10-4 at home after knocking off Texas last Saturday to begin a three-game home stand, earned a 91-64 win over the Cyclones (2-19, 0-16 Big 12) in the first matchup on Jan. 9 in Ames. Tech’s 22 assists were the most this season since 25 in the season opener against Northwestern State and matched the 22 the team had at TCU in 2019 (Program record in a Big 12 game is 30 against Baylor in 2002).

“I think we understand the last two games our backs were against the walls a little bit,” said Texas Tech coach Chris Beard who improved to 73-13 in home games leading the program. “I thought the guys played their best basketball when we needed them to play their best basketball. I think that was the story of tonight. Fifty-percent shooting, low turnover game, 22 assists of our 29 baskets. We’re playing the game the right way. Defensively, I think we were locked in. We held TCU to a field goal percentage that favored us and we guarded the 3-point line well as well.”

Edwards scored 17 of his season-high 20 points in the first half and finished the game shooting 7-for-8 from the field and 4-for-5 on 3-pointers. A junior from Arlington, he added four assists which takes him to 203 assists in his career. His 20 points were just shy of his career-high of 24 last season at Kansas State and came after he had two 19-point performances this season. Kevin McCullar and Tyreek Smith added nine points each, while Terrence Shannon, Jr. had eight in a game where Edwards was the only double-digit scorer but where six players had two or more assists.

“Scoring isn’t that much important to me,” Edwards said. “I mean if I have zero points and we win I’m going to be happy and if I have 20 when it comes to the win so be it. I’d rather have a win more than anything. We know what’s at stake and I’m going to do everything I can to lead this team to victory. If that’s either getting rebounds, assists or scoring whatever that is I’ll do it.”

Mac McClung was limited to a season-low four points but matched a season-high with six assists to lead the team, while Marcus Santos-Silva also had four assists in the game. Micah Peavy matched his career-high with seven rebounds and added seven points and two assists and Smith added six rebounds to his career-high nine points on a 4-for-4 shooting performance. Chibuzo Agbo added four points and freshman Vladislav Goldin entered the game on the crowd’s demand and scored two points. The Red Raiders finished the game shooting 29-for-56 (48.3 percent) with six 3-pointers – four coming from Edwards and Shannon and McCullar hitting one each.

RJ Nembhard led TCU with 10 points while Mike Miles was limited to two for the two Horned Frogs who came into the game leading the team in scoring in double figures. Kevin Samuel added seven points and three rebounds and Charles O’Bannon had six points.

Texas Tech is now limiting teams to just 62.6 points per game this season which leads the Big 12 after limiting Texas to 59 and TCU to 49 in its past two games.

“We had a great game plan by the coaches,” Edwards said. “We just executed it I think putting pressure on them, corralling their ball screen, you know just doing anything we could to get it out of their hands and it worked tonight.”

Santos-Silva scored on a layup on the first possession of the game after winning the jump ball.
Tech tied the game at 8-8 on an alley-oop layup by Smith off an assist from Shannon.
Peavy made a layup to give Tech a 22-13 lead… The basket capped a 7-0 run by the Red Raiders that started with Edwards hitting a 3-pointer and then a layup.
Edwards drilled a 3-pointer to have Tech on a 9-0 run and up 36-22… Edwards had 17 points at that point with three 3-pointers.
A runner by McClung to start the second half gave Tech an 11-0 run before TCU scored on its next possession.
Smith hit a long-range jumper at the arc’s line to give Tech a 46-29 lead before a Peavy jumper made it 48-29 with 12 minutes to play.
McCullar buried a 3-pointer off an assist from McClung to give Tech a 51-29 lead… The Red Raiders were on an 9-0 with the basket before TCU hit a pair of free throws on the other end.

Texas Tech took a 36-22 halftime lead after going on a 9-0 run to end the half. Edwards led the Red Raiders with 17 points and four assists in the half, while Shannon had eight points and two assists. Tech was shooting 14-for-29 from the field with assists on each of its baskets. Santos-Silva also had four assists in the first half to go along with four rebounds, two steals and two points. TCU was shooting 36.0 percent from the field and was only 2-for-9 on 3-pointers, while the Red Raiders were 4-for-8 on 3-pointers with Edwards going 3-for-4 and Shannon hitting another from beyond the arc. O’Bannon led TCU with six points in the first half. Tech was also 4-for-7 at the free-throw line and had a 19-12 rebounding advantage after 20 minutes of play.