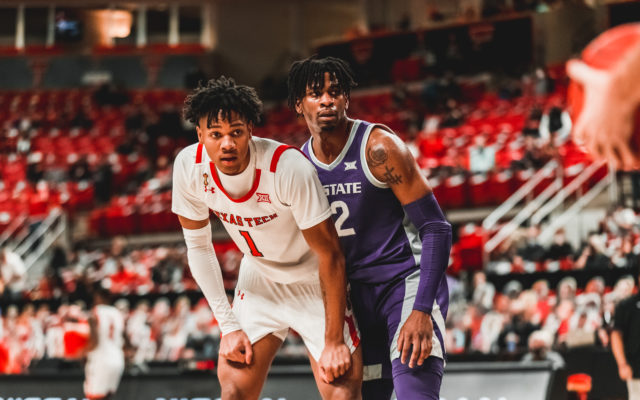 LUBBOCK, Texas – Texas Tech sophomore Terrence Shannon, Jr. scored a season-high 22 points in an 82-71 win over Kansas State on Tuesday where he went 11-for-12 at the free-throw line and the team was 30-for-36.

The No. 18 Red Raiders (9-3, 2-2 Big 12) improved to 7-2 at the United Supermarkets Arena this season and evened their conference record with Mac McClung adding 16 points and Marcus Santos-Silva going for 14 points. Tech, which led 36-31 at halftime and responded from an overtime loss to Oklahoma State last Saturday, committed only nine turnovers in the game and shot 45.3 percent from the field to go along with 83.3 percent at the line.

Tech will now play a pair of road games, starting against Iowa State at 3 p.m. on Saturday in Ames, Iowa before playing at No. 4 Texas next Wednesday in Austin. KSU fell to 5-7 overall and to 1-3 in Big 12 play with the loss.

Texas Tech went with the starting lineup of Santos-Silva, McClung, Micah Peavy, Kyler Edwards and Kevin McCullar for the first time this season. Peavy would score the game’s first four points and finished with nine points, three rebounds and two assists, while Edwards also had nine points to go along with five rebounds. McCullar led the team with seven rebounds and also had six points in his third game back and second straight from the starting lineup. Santos-Silva finished the game with his 14 points after going 5-for-9 from the field. McClung now leads Texas Tech with 15.1 points per game this season after going for double digits for the eighth time. He was coming off leading the Red Raiders with 21 points against Oklahoma State and scored his 16 against the Wildcats by shooting 6-for-11 from the field with two 3-pointers.

Eight different Red Raiders hit at least one free throw in the game, including Santos-Silva and Jamarius Burton making four each. Peavy was 3-for-4 at the line, while McClung, Edwards, McCullar and Nimari Burnett had two each.

Shannon finished the game 5-for-9 from the field to go along with making 11 free throws for the Red Raiders who made a season-high 30 in the game. A starter in the 10 games he’d played in before Tuesday, Shannon would come into the game as a reserve for the first time this season. He hit a 3-pointer and was also one free throw shy of matching his career-high of 12 last year at West Virginia. He’s now averaging 13.8 points per game and is shooting 52.0 percent from the field.

“For me it wasn’t really an adjustment,” said Shannon of not starting in the game. “I told him before the game whatever we got to do to win and if it’s me coming off the bench, I told him I’d be fine with that. It worked all right.”

Shannon has now scored 20 or more in three of the first four Big 12 games this season after also having 21 at Oklahoma and was two off of his career-high of 24 last season at DePaul. He’s now led the team in scoring three time this season and is averaging 19.0 points through four conference games.

On the win over Kansas State: “We played better tonight. If one play goes better in our game against Kansas and Oklahoma State we win. Same could be said about our win at Oklahoma. But the reality is that we could be 4-0 in the Big 12 right now and in first place. We are still the same basketball team at 2-2 as we would be at 4-0. We just have to keep getting better. The scoreboard can’t dictate where we are in our journey. We are more concerned with the process than the outcome. We have to win games though to stay alive in the fight and be invited to the tournament, but more important right now to us is getting better. Tonight I thought we got better in parts of the game.”

On Shannon not being in the starting lineup: “I’m proud to tell this story and it’s the truth. It wasn’t a conversation, it was TJ coming to me. Obviously, in our last game, we were disappointed… There were some things internally that we weren’t satisfied with. So we had some hard days in practice when we were kind of looking at ourselves from the inside out. We are always tinkering with our starting lineup to see what can give us the best outcome that night, we always have seven players in our mind. TJ came to me as a veteran player and said ‘hey coach whatever you need from me tonight, I know to be a championship team you coaches need the best payers hard, I want you to coach me hard and help my team win.’ I don’t always take the player’s suggestions, but this time I did. I thought TJ’s mind and heart were in the right place to basically come off the bench tonight to get us off to a good start and he played great. He looked like the best player on the floor in segments of this game.”

KEY MOMENTS
Peavy scored the first basket of the game with a reverse layup on a baseline drive to give Tech a 2-0 lead…. Peavy scored the second basket also with another layup as the Red Raiders began the game on a 4-0 run before KSU got on the board.
Down 17-10, Texas Tech tied the game with a 7-0 run that started with Santos-Silva making a free throw and included jumpers from McClung and Shannon. Burton capped the run with two free throws before KSU scored.
The Red Raiders continued the momentum and took a 25-19 lead with an 8-0 run (15-2) with Edwards making the final basket of the run that included four points from Santos-Silva.
The half of runs finished with Tech on a 6-2 run that ended with Shannon connecting at the buzzer coming out of a timeout with one second on the clock… The shot came from just beyond the free-throw line and stuck on the rim before falling in.
Tech took its first double-digit lead with Peavy knocking down a pair of free throws five minutes into the second half.
Shannon had a steal and a highlight-reel dunk to give Tech a 55-41 lead with 13 minutes remaining in the game… It was followed by a Santos-Silva free throw and McClung layup for a 9-0 run that gave Tech a 17-point lead which was the largest of the game (11:56).
Shannon went on a personal 6-0 run to give Tech a 71-58 lead (5:13) after he made a pair of free throws after a technical foul then got a second-chance basket for a 69-58 lead (5:46) followed by two free throws.
HALFTIME REPORT: Texas Tech took a 36-31 halftime lead with both teams shooting over 50 percent in the first half. Santos-Silva led the Red Raiders with 11 points on 4-for-6 shooting and 3-for-4 at the free-throw line, while McClung had eight points with two 3-pointers. Shannon came off the bench for the first time this season and had six points at the break, including hitting the buzzer-beater to end the half to give Tech a five-point lead. The Red Raiders were 8-for-9 at the free-throw line and shot 52.0 percent from the field despite going 2-for-10 on 3-pointers, while KSU went 5-for-11 on 3-pointers and shot 12-for-24 from the field. Pack led the Wildcats with 15 points after going 6-for-7 from the field with three 3-pointers. Tech has now led at halftime in 9 of 12 games this season.

WILDCAT REPORT: Nijel Pack and Selton Miguel led Kansas State with 17 points each, while Davion Bradford and Mike McGuirl had 10 each. KSU finished the game shooting 49.1 percent which is the best a Tech opponent has this season and was 8-for-24 on 3-pointers. Pack finished the game 3-for-7 on 3-pointers. KSU hosts Oklahoma State on Saturday in Manhattan, Kansas.