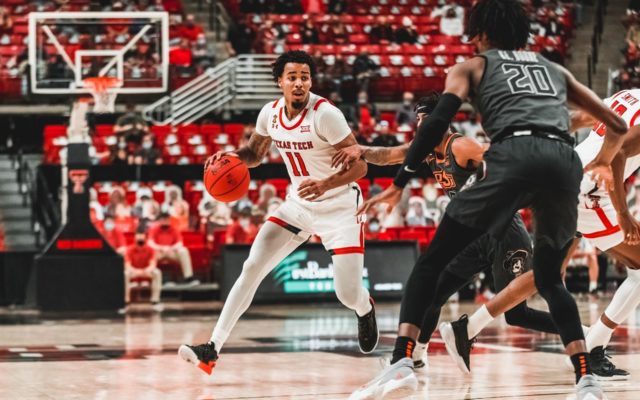 AMES, Iowa – Texas Tech sophomore Kevin McCullar recorded a double-double with 15 points and 11 rebounds, while Kyler Edwards scored 19 and Mac McClung 18 to help lead the No. 18-ranked Red Raiders to a 91-64 win over Iowa State on Saturday at the Hilton Coliseum.

“Road wins are something you always remember,” said Texas Tech coach Chris Beard who won his 200th game as an NCAA head coach. “Tonight we had some awesome individual performances. There was a lot of unselfishness out there tonight. It was a great road trip for our team as they continue to come together as a team and roles continue getting defined.”

The Red Raiders will now play at No. 4 Texas at 8 p.m. on Wednesday in Austin before hosting No. 2 Baylor next Saturday at the United Supermarkets Arena.

McCullar secured his first career double-double and matched career highs in both scoring and rebounding in the win, while Edwards matched a season-high with 19 points after shooting 6-for-9 from the field with three 3-pointers. McClung shot lights out, going 8-for-10 from the field to finish with 18 points for the Red Raiders who were 33-for-56 from the field. McCullar now has 22 rebounds at Hilton Coliseum in two games after also going for 11 rebounds at ISU last season.

Terrence Shannon, Jr. recorded a career-high six assists to go along with 11 points and five rebounds after coming off a game against Kansas State where he had a career-high 22 points. Shannon was 4-for-4 at the free-throw line for the Red Raiders while Marcus Santos-Silva and Micah Peavy both finished with six points from the starting lineup. Edwards, who also had 19 points in the win over Abilene Christian, now leads the team with 24 3-pointers this season and has 103 in his career. Tech finished the game with 11 steals with Santos-Silva, Peavy, McCullar and Shannon having two each.

Beard is now 200-77 as an NCAA head coach with one season at McMurry, two at Angelo State, one at Little Rock and is in his fifth at Tech. He reached the 100 win milestone at Tech with the win over Texas A&M Corpus Christi last month and is now 104-47 leading the Red Raider program.

Iowa State finished the game shooting 44.1 percent from the field and 6-for-18 on 3-pointers. The Cyclones were outscored 24-4 in points off turnovers by the Red Raiders. Solomon Young and Rasir Bolton led ISU with 15 points each, while Javan Johnson had 14 and Jalen Coleman-Lands added 11.

QUOTES – Chris Beard
On the team’s offense: “I always think about what kind of shots we’re getting. Are they good shots or great shots. I think tonight we got a lot of great shots. We had a nice 15 assist game and we can be even better at that. It was good to see the guys sharing the ball. I thought we got some opportunities in transition by pushing the ball and running. You’re not always going to make every great shot, but you’ve got a better chance and percentage as the shot quality goes up.”

On Kyler Edwards: “I really don’t have a Plan B without Kyler playing his best. When he plays like he did tonight I think we can beat anyone in the Big 12 which translate to us being able to compete with anyone in the country. There are not a lot of excuses with Kyler. When he plays well he keeps that humility and when he struggles from time-to-time, he just goes back to work. I enjoy watching him play well because I know how much work he puts into it. He’s a tough guy who is running his own race in life and basketball. He’s a guys I have a lot of respect for.”

On Kevin McCullar: “Kevin is just scratching the surface. He played well tonight, but there’s going to be a night where he’s playing at a whole other level. He’s a versatile player who can influence the game in a variety of ways. He can go out there and score, but he understands how to get people involved and get our offense going. He’s a really good player and it’s great to see it open up and slow down for him. He’s just getting started and can play a lot better than he did tonight. I have high expectations for that guy.”

UP NEXT: Texas Tech will now face a pair of top-5 teams next week, starting with No. 4 Texas (10-1, 4-0 Big 12) at 8 p.m. on Wednesday in Austin before hosting No. 2 Baylor at 3 p.m. on Saturday, Jan. 16 at the United Supermarkets Arena. Tech is 0-2 this season in ranked vs. ranked matchups after going 1-4 last year against top-5 teams. The win came against No. 1 Louisville in New York. The Red Raiders have 12 wins over top-5 teams in their program history, including six in the Beard era. The Longhorns are coming off a 72-70 win at No. 14 West Virginia on Saturday to extend a six-game winning streak.

KEY MOMENTS:
Tech took command of the first half and game with a 12-0 run for a 38-20 lead, starting with a pair of McCullar free throws and included two McClung jumpers and Edwards hitting a 3-pointer and an and-one.
The Red Raiders put together their second 12-0 run of the first half to build a 54-28 advantage with 1:12 on the clock… Edwards hit two 3-pointers during the run that was capped by Shannon layup. The 26-point lead was the largest of the first half.
Tech, which won 87-57 at ISU last season, led by 30 at 86-56 with 2:45 remaining in the game on a Shannon 3-pointer.
Texas Tech scored on its second possession with McClung getting an and-one after making a fast-break layup that started on an Edwards steal on the other side of the court. Tech took a 3-2 lead with its first basket.
Smith and McCullar had consecutive offensive rebounds and putbacks to give Tech a 9-8 lead at the first media timeout… The Red Raiders had four offensive rebounds in the opening four minutes of the game.
Tech went on an 8-0to take a 17-8 lead that was capped with a Burton 3-pointer then a McCullar steal and layup.
McClung drilled a 3-pointer to give Tech its first double-digit lead of the game at 22-12 (1H, 12:26)… McClung had eight points at that point by beginning the game 3-for-3 from the field.
HALFTIME REPORT: Texas Tech took a 54-30 lead into halftime after shooting 20-for-33 from the field with five 3-pointers. Edwards led the team with 16 points after going 5-for-6 from the field and 3-for-4 on 3-pointers, while McClung had 12 points on 5-for-6 shooting. McCullar had nine points and seven rebounds through the first 20 minutes of play and Peavy had six points for the Red Raiders who had seven players score by halftime. Tech was 5-for-11 on 3-pointers and had nine assists on its 20 baskets. ISU was shooting 43.3 percent from the field, but was only 2-for-8 on 3-pointers. Johnson and Young had 10 points each to lead the Cyclones at halftime. The 54 points were the second most by Tech this season with 57 coming in the opener.