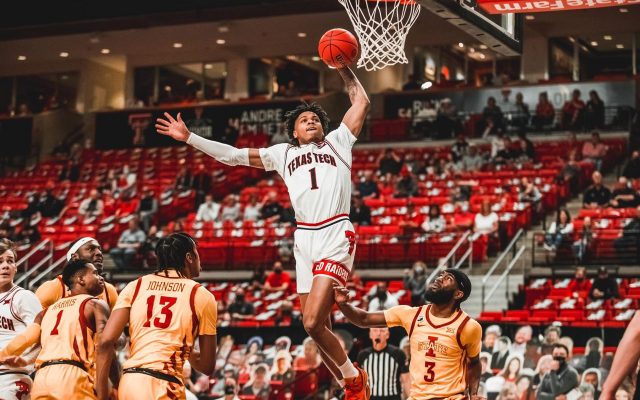 LUBBOCK, Texas – No. 18 Texas Tech extended its winning streak to three and closed out its home schedule with an 81-54 win over Iowa State on Thursday at the United Supermarkets Arena. Mac McClung led the Red Raiders with 20 points, while Marcus Santos-Silva, Micah Peavy, Kyler Edwards and Terrence Shannon, Jr. were all in double figures in the 27-point victory with a season-high 61.7 shooting percentage.

Tech (17-8, 9-7 Big 12) swept the Cyclones (2-20, 0-17 Big 12) for the second straight season and has now won five in a row in the season after also securing a 91-64 on Jan. 9 in Ames in the first matchup between the two teams. The Red Raiders will now close out the regular season with a trip to Waco to play No. 3 Baylor at 3 p.m. on Sunday at the Ferrell Center before competing in the Big 12 Championship next week in Kansas City.

“We knew they were going to have a few runs and they did, but fortunate for us, we had the last few runs which let us be successful tonight,” said Texas Tech coach Chris Beard who is now 74-13 at home leading the program after going 11-4 this season at the USA.

McClung scored 20 or more points for the 10th time this season after going 7-for-12 from the field and 5-for-6 at the free-throw line, while Santos-Silva had 14 points and seven rebounds. Shannon and Peavy would finish with 12 points each and Edward would go for 11 points on three 3-pointers. Edwards, who scored 20 on Tuesday in the win over TCU, led Tech with three steals in a game where the Red Raiders came away with nine steals as a team. Kevin McCullar added seven rebounds and Tyreek Smith had six rebounds in a game where the team had a 34-27 advantage on the glass.

The Red Raiders owned a 35-27 halftime lead and would lead by as many as 34 in the game in the second half. Tech shot 65.0 percent in the first half and 59.3 percent in the second half for the best shooting display of the season despite going 5-for-15 on 3-pointers. Tech owned a staggering 36-14 advantage in the paint and had 13 assists on 29-for-47 shooting. Peavy led Tech with three assists to go along with his best scoring performance in Big 12 play, while Santos-Silva, McClung and McCullar had two assists each.

Jalen Coleman-Lands and Tyler Harris led the Cyclones with 15 points each and Solomon Young had 10 points. ISU was limited to just 31.0 percent shooting in the game despite hitting eight 3-pointers and became the 12th team and third straight held under 60 points by the Red Raider defense.

“What we’ve been doing lately on our offense and defense, being aggressive on offense and moving that ball,” Santos-Silva said. “Also, on defense being aggressive and knowing what we got to do. We know what to do to their guards and how they play and we know the game plan we got to use for it so just going back in the film room and looking at what we did.”

Texas Tech student manager Ty Larson entered the game with 54 seconds remaining and would take a charge on the defensive end of the court. Larson is in his second season with the program and is the head student manager. He played two seasons at Eastern Wyoming College after an all-state high school career. A Douglas, Wyoming native, Larson will graduate from Texas Tech in May and plans on becoming a basketball graduate assistant and then pursing a college coaching career.

Edwards drilled a 3-pointer coming out of halftime to give Tech a 38-27 lead… It was his third 3-pointer of the game and followed it with a layup to give push the lead to 40-29.
Tech went into the first media timeout of the second half with a 46-35 lead after a pair of baskets from McClung and Santos-Silva after ISU had cut it back to seven… McClung would push the lead to 12 with a free throw coming out of the timeout.
Tech went on a 6-0 run to take a 58-43 lead with baskets from Peavy, McClung and Santos-Silva after the under-12 timeout.
McClung drilled a 3-pointer to give Tech a 63-45 lead and take his point total to 20 with 10:30 to play in the game.
Tech led by 20 for the first time in the game with Santos-Silva hitting two free throws with 9:40 on the clock (65-45 lead).
The Red Raiders were on a 14-0 to take an 81-47 lead.
Santos-Silva scored Tech’s first basket with a layup off an assist from Peavy on the team’s second possession… Peavy would score on a jumper of his own on the next possession to give Tech a 4-3 lead.
Tech went on a 12-0 run to take an 23-7 lead starting with an alley oop by Peavy from McCullar before Edwards hit his second 3-pointer of the half… A Santos-Silva layup gave the Red Raiders their first double-digit lead of the game, followed by another Peavy dunk and then three McClung free throws. The run ended with an ISU 3-pointer.
Tech had made 8 of its last 10 shots and ISU was 2 of its last 12 with the Red Raiders leading 27-12… ISU responded with a 6-0 run before McClung hit a free throw to make it 28-18 with three minutes until halftime.

Tech led 35-27 at halftime against ISU and was up by as many as 16 in the half. McClung led the Red Raiders with 10 points in the first half by going 3-for-5 from the field and 4-for-5 at the free-throw line, while Santos-Silva, Shannon and Peavy each had six points. Tech was shooting 13-for-20 (65.0 percent) in the first half and was holding ISU to only 32.3 percent. The Red Raiders had nine turnovers in the opening 20 minutes with the Cyclones having only five. Santos-Silva and McCullar led Tech with four rebounds at the break.