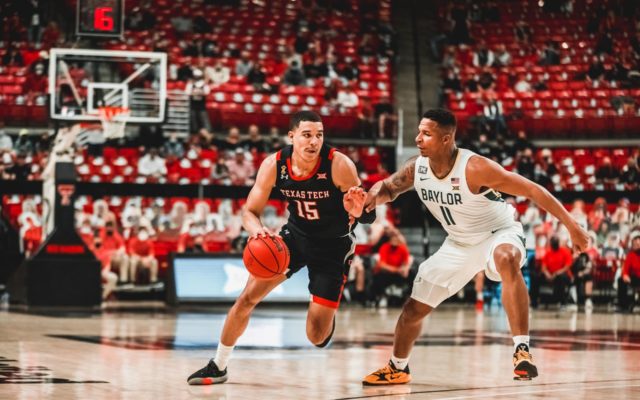 LUBBOCK, Texas – No. 15 Texas Tech had a three-game winning streak end with a 68-60 loss to No. 2 Baylor on Saturday at the United Supermarkets Arena. Mac McClung scored a season-high 24 points in the game, while Kevin McCullar recorded the second double-double of his career with 10 points and 10 rebounds to go along with a career-high four blocks in the defeat.

The Red Raiders (11-4, 4-3 Big 12) trailed 26-18 at halftime before fighting back to tie the game six minutes into the second half and would lead 45-44 after a Terrence Shannon, Jr. layup and Marcus Santos-Silva hitting a free throw on the next possession. The Bears (12-0, 5-0 Big 12) would respond though by taking the lead on the next trip down the court on an Adam Flager jumper in the paint and wouldn’t trail again as they extended a 12-game winning streak to begin their season.

“There were two hard-playing teams out there,” Texas Tech coach Chris Beard said. “I think both teams were competing and playing really hard. I just thought they played better than us in the last eight minutes of the game when it mattered most. I think what I learned is what I already knew. We can play with these teams. We can beat these teams. What we need to continue to do is get better.”

Texas Tech did not go to the free-throw line in the first half but would finish by going 10-for-14 in the second half. Baylor was 13-for-22 at the line and also hit nine 3-pointers, while the Red Raiders were 6-for-24 on 3s. Tech was limited to 35.5 percent shooting in the game and had 20 turnovers for the first time this season.

Santos-Silva finished the game with 11 rebounds and eight points, while Kyler Edwards had seven points and six rebounds. McCullar, who has now played six games after missing the first nine due to a preseason injury, recorded a double-double for the second straight Saturday after going for 15 points and 11 rebounds last week at Iowa State. He was coming off a career-high 16 points at Texas before securing the 10/10 double-double against the Bears. McClung set a new season high for the second straight game after scoring 24 on 8-for-18 shooting. He was also 4-for-4 at the free-throw line a game after dropping 22 on Texas, including the game-winner with three seconds remaining.

Texas Tech finished the game with a 42-37 rebounding advantage, but also committed 20 turnovers after committing only seven in its road win at No. 4 Texas on Wednesday. During the three-game winning streak the Red Raiders committed only nine turnovers in the win over Kansas State, 10 at Iowa State and then secured the first top-5 road victory in program history by maintaining possession in Austin.

Micah Peavy added six points and five rebounds from the starting lineup for the Red Raiders and Shannon finished with five rebounds. Shannon was limited to just two points after going 1-for-7 from the field. McCullar’s four blocks led the team, while McClung had three and Santos-Silva and Peavy one each. Tech’s nine blocked shots against the Bears were a season-high for the team.

Texas Tech returns to action against TCU at 7 p.m. on Wednesday in Fort Worth. The Red Raiders and Horned Frogs split last year’s series with TCU earning a 65-54 win on its home court on Jan. 21, 2020 to snap a four-game Tech winning streak in the series. TTU won the second matchup 88-42 in Lubbock and is now 84-52 all-time in the series history.

A steal by McCullar led to a fastbreak dunk by Santos-Silva to cut an eight-point halftime deficit to 30-27 (2H, 16:53)
Tech took its first lead of the second half at 35-34 on a Shannon layup followed by a Santos-Silva free throw with 14:16 to play
The Red Raiders had a 44-42 lead (7:51) after a pair of McClung and McCullar free throws for a four-point swing
Baylor took the lead back and would keep it with an Adam Flager jumper for a 46-45 advantage
McCullar would get the Red Raiders back to within three at 52-49 with 4:49 on the clock… It would be as close as the game would get the rest of the way after Butler and Flager hit 3-pointers in response to push it to 59-51 with 3:24 on the clock
Edwards drilled a 3-pointer with two seconds on the shot clock on Tech’s second possession to give the Red Raiders a 3-0 lead.
Baylor went on a 11-0 run after Edwards started the game with the 3-pointer before McCullar stopped the run with a jumper
Tech went on a 6-0 run of its own with a Santos-Silva second-chance basket, McClung layup and Peavy putback to cut the deficit to 19-6 (1H, 4:13)
Edwards mad the final Tech basket of the half with a layup to make it 21-18 before Baylor went on a 5-0 run to end the half and take the eight-point lead into the locker room.

Baylor took a 26-18 halftime lead after hitting five 3-pointers in the first half while the Red Raiders were just 2-for-12 on 3-pointers and didn’t make a trip to the free-throw line. BU was only 1-for-4 at the free-throw line through 20 minutes and was shooting 35.7 percent from the field. Tech was at 26.7 percent shooting. McClung led the Red Raiders with seven points in the first half, while Edwards had five points and four rebounds. McCullar was leading Tech with six rebounds to go along with three blocked shots and two points. Mitchell led Baylor with 10 points, while Flagler had six for the Bears who had a 11-8 turnover advantage. The 18 points at halftime were a season-low for Tech, falling one behind the 19 it scored against Houston at halftime.