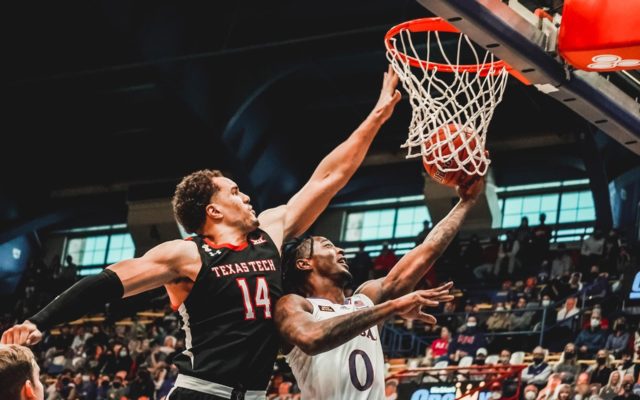 LAWRENCE, Kansas – Texas Tech sophomores Kevin McCullar and Terrence Shannon, Jr. hit a pair of 3-pointers to help cut a 12-point deficit to three in the final minute, but Kansas responded with Christian Braun hitting one of his own with 21 seconds remaining as the No. 23 Jayhawks held off a Red Raider rally for a 67-61 win on Saturday at the Allen Fieldhouse.

Marcus Santos-Silva and Kevin McCullar led the Red Raiders with 12 points each, while Mac McClung had 11 and Micah Peavy scored 10. McCullar added nine rebounds and two assists and Santos-Silva had eight rebounds. McCullar and Santos-Silva both fell just shy third double-double. He had four offensive rebounds in the game and finished shooting 5-for-11 from the field for the Red Raiders who were 22-for-52 (42.3 percent). McClung hit two 3-pointers for Tech which was only 5-for-15 on 3-pointers in the game. Shannon finished the game with five points and two rebounds.

A grad transfer from VCU, Santos-Silva reached the 1,000 point scoring milestone in the win and now has 1,004 points through 118 games in his career.

The Kansas starting lineup all scored in double figures in the game, led by 17 from David McCormack who was 7-for-10 from the field and 3-for-3 at the free-throw line. Jalen Wilson recorded a double-double with 11 points and 11 rebounds, while Braun’s final 3-pointer with 21 seconds remaining gave him 10 points for the game and KU the six-point lead. Oachai Agbaji added 14 points with a team-high three 3-pointers as the Jayhawks finished the game 8-for-26 from beyond the arc and 25-for-61 (41.0 percent) from the field.

UP NEXT: The Red Raiders have a quick turnaround where they will now play at Oklahoma State (14-6, 7-6 Big 12) at 8 p.m. on Monday at Gallagher-Iba Arena in Stillwater, Oklahoma. The ESPN Big Monday matchup is the second meeting between the teams this season with the Cowboys escaping with an 82-77 overtime win back on Jan. 2 in Lubbock. The Cowboys, who are 8-3 at home this season, did not play this weekend and are currently on a two-game winning streak following a pair of wins over Kansas State and Iowa State. Tech is 23-46 against OSU in the all-time series, 5-25 in Stillwater and 4-5 in the Beard era.

KEY MOMENTS
McCullar buried a 3-pointer after a pair of Santos-Silva free throws to make it 62-58 with 1:30 to play… Shannon would hit another 3-pointer to make it 64-61 with 44 seconds on the clock but Braun responded with one of his own for KU to push it back to a six-point game which proved to be the final result.
KU had a five-point swing that made it 62-51 with Garrett hitting a runner, McCullar missing two free throws and then Agbaji hitting a 3-pointer (2H, 3:51). Tech took a timeout down 11 after
Santos-Silva made it a 57-51 game with 5:24 to play after a tough layup…. The basket made it a six-point game after KU had built a 10-point advantage.
McClung hit a jumper to cut KU’s lead to 51-44 (2H, 9:11)… McClung had eight points in the game with that basket but KU pushed its lead to 53-45 with a Garrett layup going into the under-8 media timeout.
Edwards hit a 3-pointer to make it 45-37 with 13 minutes remaining before McCullar made a jumper to cut it to 49-40 (11:26).
KU led 40-30 at the first media timeout of the second half after a Wilson 3-pointer… Tech would respond with Shannon who would stop an 8-0 KU run with a layup that made it 42-32 (14:33).
McClung buried a 3-pointer in the final seconds of the first half to cut KU’s halftime lead to 31-25… It was McClung’s first basket of the half after starting the game 0-for-4.
McCullar hit a jumper to cut KU’s lead to 22-18 with six minutes to play in the first half… Santos-Silva had six points after his second dunk of the day that made it 26-20 (1H, 3:22).
McCullar scored Tech’s first basket of the game on the fourth possession with a layup… It cut Kansas’ lead to 5-2 to start the game.
KU had an 8-2 lead at the first media timeout with TTU starting the game 1-for-5 from the field with two turnovers.
Peavy had a dunk off to cut Tech’s deficit to 15-10 with 12 minutes to play in the first half… A Santos-Silva dunk off an assist from McClung made it 17-14 halfway through the half.
HALFTIME REPORT: Kansas led 31-25 at halftime with the Red Raiders shooting just 37.0 percent from the field, including going 1-for-6 on 3-pointers. Peavy led Tech with eight points by going 4-for-5 from the field and Santos-Silva had six points. McCormack led KU with 12 points at the break with a 5-for-5 shooting performance. KU was shooting 41 percent at the break. Tech trailed 29-26 at halftime in the first matchup against KU… Tech has trailed at halftime in eight games this season.