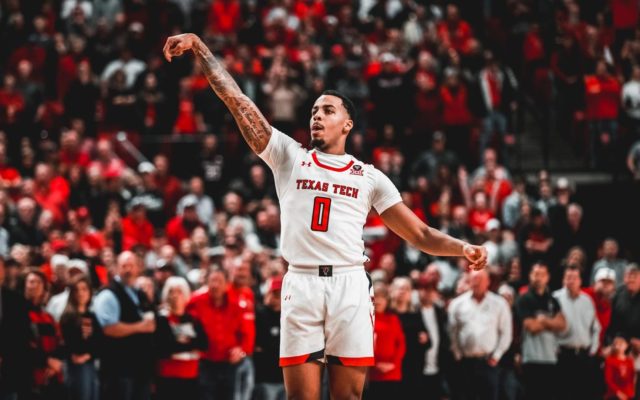 LUBBOCK, Texas – Kyler Edwards made a career-high five 3-pointers and finished with 22 points to help lead No. 23 Texas Tech to a 72-52 win over Iowa State on Saturday at the United Supermarkets Arena.

Texas Tech, which recorded its fourth sell-out of the season with 15,098 fans in attendance, improved to 9-1 at home this season and to 59-6 under head coach Chris Beard. The Red Raiders have now held eight opponents under 60 points this season and have 11 double-digit scoring victories through 17 games.

“To win a Big 12 game, you have to score enough points,” Beard said. “As a coach, you sit around and try to figure out how to score those points. It has never been the plan to score all those points on offense. You have to create an offense off of your defense and special teams. When we score off of the defense, it takes a lot of pressure off of the offense. Those plays make us a better team.”

Edwards, who had scored a career-high 24 points on Tuesday at Kansas State, followed by that road performance by going 6-for-9 from the field and 5 of 6 on 3-pointers for his game-high 22 points against the Cyclones. A sophomore from Arlington, he is now scoring 12.0 points per game after surpassing his previous career-high of four 3-pointers last season against Northern Colorado. Moretti added 17 points after going 3 of 6 on 3-pointers and Terrence Shannon, Jr. returned from a two-game absence due to injury to score 11 points in 22 minutes of play off the bench. Moretti scored 14 of his 17 in the second half. Shannon finished the game 4-for-4 from the field for the Red Raiders who were 25 of 46 shooting and 9 of 21 on 3-pointers.

Jahmi’us Ramsey contributed seven points and three assists, while Chris Clarke had four assists and TJ Holyfield secured four rebounds. The Red Raiders forced 20 turnovers by the Cyclones and finished the game with 14 assists on 25 shots. Tech scored 11 points on fast breaks and owned a 32-15 advantage in scoring off turnovers. Tyrese Haliburton led Iowa State with 13 points on 5 of 12 shooting, while Michael Jacobson added 10 and Tre Jackson eight. ISU was 0-for-13 on 3-pointers in the first half before going 3 of 9 in the second half.

Texas Tech took a 27-21 lead into halftime led by Edwards who had eight points and Shannon who came off the bench to score seven. The Red Raiders shot 47.6 percent from the field with three 3-pointers, while Iowa State was limited to 31.3 percent shooting that included going 0-for-13 on 3-pointers. Tech opened the game on a 5-0 run with Edwards hitting a 3-pointer followed by a Holyfield put back and were up 11-2 when Shannon had a steal and dunk to cap a 6-0 run. The Cyclones closed to 13-8 on a Haliburton jumper before another Edwards 3-pointer to push it to 20-13. Moretti hit his only basket of the first half with a 3-pointer to give the Red Raiders a 25-17 lead with four minutes to play and Holyfield knocked down two free throws with two seconds remaining in the half for the six-point advantage when the teams went into the locker room.