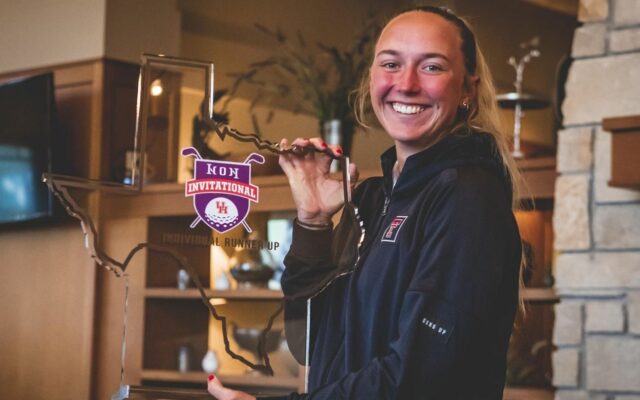 LUBBOCK, Texas – No. 25 Texas Tech sank 20 birdies en route to its lowest 18-hole round in program history Tuesday as the Red Raiders combined for a 16-under-par 272 to wrap the ICON Invitational in fourth place overall.

The Red Raiders, who came into the final round at 3-over for the tournament, snapped the previous school record of a 274 round that was set twice previously at the 2019 Bruzzy Challenge (spring) and the 2019 Jim West Challenge (fall). It was the lowest round of the 15-team field, besting runner-up Illinois by a single stroke.

It wasn’t the only school record that was touched Tuesday, either.

Amy Taylor, coming off consecutive 4-under 68 rounds to start the tournament, birdied six or her first nine holes and drained seven overall en route to a 6-under 66 card that pushed her to a 14-under 202, which matched teammate Gala Dumez’ already 54-hole school record that was set just last spring at the Big 12 Championships.

Taylor closed the two-day event at 14-under for the tournament, falling just shy of her first individual title as USC’s Amari Avery used a 7-under final round to edge the senior by a single stroke. It marked the second-consecutive week Taylor had finished as the tournament runner-up after coming just shy of medalist honors at the Columbia Classic.

Taylor’s 6-under final round matched the lowest round of her career, which previously came at 2019 Valspar Augusta Invitational. It is only the 17th round of 66 or better by a Red Raider during the Big 12 era.

“Going into today, we knew that winning the tournament might be out of reach, so our team just focused on trying to be the best we could be,” head coach JoJo Robertson said. “They were incredible. From start to finish, they fought for every shot and showed what they are capable of. Amy has continued her great play and has been at the top of the leaderboard two weeks in a row now. She’s worked extremely hard to get to this point, and I couldn’t be prouder of her.”

For as well as Taylor played Tuesday, the same could be said about the rest of the Texas Tech lineup as three other Red Raiders were at least 3-under on the day. Chelsea Romas highlighted the group with a bogey-free 4-under 68 round that was one stroke better than both Anna Dong and Dumez at 3-under.

Texas Tech only had five holes at bogey or worse between its entire lineup Tuesday as Romas fired the lowest 18-hole score of her still young career, while Dong and Dumez were in the 60s for the first time this spring. Chiara Horder rounded out the Red Raider lineup with a 2-over 74 card of her own.

The strong final round allowed the Red Raiders to take sole possession of fourth place, easily surpassing both Texas A&M and host Houston after entering the day in a three-way tie. The Aggies finished eight strokes back of the Red Raiders in fifth place at 5-under, while the Cougars fell into a tie for seventh at 5-over for the tournament.

USC continued its strong play to run away with the team title as the Trojans finished 39-under for the three rounds, 15 strokes better than second-place Illinois and 20 in front of Oklahoma State in third. USC came into the week ranked No. 15 in the latest Golfweek poll as one seven schools in the top 30 among the field.

The Red Raiders topped three of those teams in No. 17 Ole Miss, No. 19 Texas A&M and No. 21 for their fifth top-five finish this season in only seven events. Texas Tech previously opened its spring slate with a runner-up showing last week at the Columbia Classic hosted outside Orlando, Florida.

The ICON Invitational was the first of four tournament in the state of Texas for the Red Raiders this spring as Texas Tech will next travel to the Trinity Forest Invitational on March 7-8 in Dallas. The Red Raiders will also host a match play event from The Rawls Course April 3-4 before traveling to the Big 12 Championships back in the Houston area on April 22-24.