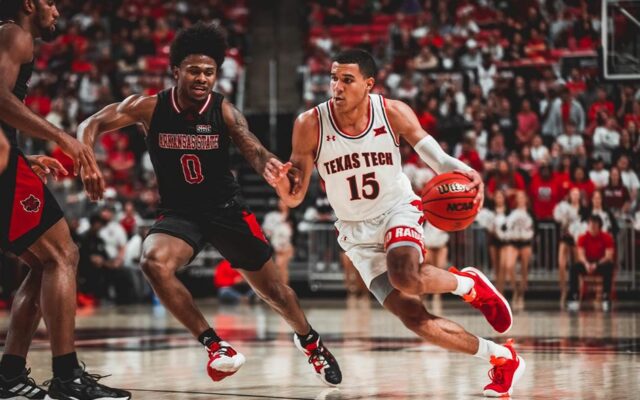 LUBBOCK, Texas – Kevin McCullar went for 21 points, five rebounds and four assists while Adonis Arms scored a season-high 15 points to lead No. 25 Texas Tech to a 75-62 win over Arkansas State on Tuesday at the United Supermarkets Arena.

The Red Raiders (8-1) improved to 6-0 at home this season and extended a winning streak over non-conference opponents at home to 12 with the victory, while the Red Wolves (7-3) had a four-game winning streak end. Tech led 45-28 at halftime and finished the game with McCullar, Arms, Bryson Williams and Davion Warren scoring in double figures. The team owned a 40-12 scoring advantage in the paint, shot 56.0 percent from the field with seven 3-pointers and held ASU to 43.3 percent shooting.

“There were times out there when we looked great, and we had some adversity,” Texas Tech coach Mark Adams said. “We went on some runs and we played well in the first half. Then in the second half they went on a run, and we couldn’t stop them. But we did hold on to get the win. I don’t want to take that away from our guys because Arkansas State is a good basketball team.”

Tech returns to action against No. 5 Gonzaga at 12 p.m. (CST) on Saturday at the Jerry Colangelo Classic in Phoenix, Arizona. The Red Raiders and Bulldogs (8-2) will be meeting for the fourth time with Tech owning a 3-0 all-time advantage in the series after a win in the 2019 Elite Eight in Anaheim, California.

McCullar led the team in scoring third time this season and eighth in his career after going 7-for-12 from the field, including knocking down 3 of 6 from beyond the arc. McCullar is now averaging 14.3 points per game with a season-high 24 points against Grambling being his only other 20-plus point performance.

“This was a great win,” McCullar said. “We always celebrate the victories. This was a dogfight, but tomorrow we will come in and clean some things up. We try to play with 10 or less turnovers. We would definitely like to clean it up. It’s still early and we are working every day especially on that.”

Arms scored his season-best 15 points after hitting 5 of 6 shots from the field and 2 of 3 on 3-pointers. His previous season-high was 12 points against Incarnate Word and he’s now averaging 7.1 points per game. “I’ve been in college for a long time,” Arms said. “It’s cool to get that type of love, but as long as we get the win that’s all that matters to me.”

Williams now has six games in double figures this season and 85 in his career after going for 12 points, while Warren scored 11 points and is now averaging 11.8 points per game this season. Warren and McCullar led the team with five rebounds each in a game where Tech had a 36-21 rebounding advantage, while Williams, Kevin Obanor and Marcus Santos-Silva each had four rebounds. Tech finished the game 7-for-18 on 3-pointers with Williams going 2-for-2 on 3-pointers.

Markise Davis led Arkansas State with 17 points, while Marquis Eaton had 15 and Malcolm Farrington went off for 14 by hitting four 3-pointers. ASU was 9-for-30 on 3-pointers and forced Tech to commit 15 turnovers in the game. The Red Wolves host Air Force on Sunday in Jonesboro, Arkansas.

McCullar scored Tech’s first points of the game on a pair of free throws on the team’s first possession for a 2-0 lead… ASU had won the tip but missed its first shot of the game.
Tech started on a 7-0 run with Williams hitting a layup and then a 3-pointer after the McCullar free throws…. Eaton hit a 3-pointer for ASU at the 17:23 mark for the first points for the Red Wolves
Obanor hit a jumper for a 14-8 lead coming out of the first media timeout for his first points of the game… Batcho gave Tech a 19-15 lead with a layup off an assist from Shannon with 11:23 remaining in the first half
Tech went on a 9-0 run to take a 25-15 lead with baskets from Santos-Silva, Warren and Shannon after the Batcho three-point play… Wesley ended the run with a jumper for the Red Wolves
McCullar hit his first 3-pointer of the game after a layup to push Tech’s lead to 30-17 with eight minutes to play in the half… Williams would push the lead to 35-17 with his second 3-pointer of the half
Tech led by 20 for the first time in the game at 41-21 with Santos-Silva hitting jumper with 4:09 on the clock until halftime… Tech was on a 6-0 run with the basket with Santos-Silva scoring four of the six after a layup by McCullar
Tech went up 56-35 on another McCullar 3-pointer five minutes into the second half… McCullar had three 3-pointers and 17 points at that point in the game
Arms drilled a 3-pointer to push Tech’s lead to 65-41 with 12 minutes remaining in the game and then another one with two seconds on the shot clock for a 71-54 lead… It was Tech’s sixth and seventh 3-pointers of the game

HALFTIME REPORT: Texas Tech led 45-28 at halftime after shooting 17-for-26 (65.4 percent) from the field with three 3-pointers. McCullar led the Rad Raiders with 11 points, while Warren had nine and Williams was at eight points through the opening 20 minutes of the game. McCullar was 3-for-5 from the field and 4 of 4 at the free-throw line for Tech which was 8-for-11 at the line going into the break. Tech had a 21-6 rebounding advantage and was owning the paint with a 26-6 scoring advantage inside early. Santos-Silva led the Tech reserves with six points by going 3-for-4 from the field while Williams, Warren and McCullar led the team with three rebounds each. Markise Davis led Arkansas State with nine points at halftime with the Red Wolves shooting 39.3 percent from the field and only 4-for-15 on 3-pointers. Tech has still not trailed at halftime through nine games this season.

UP NEXT AT HOME: The Red Raiders will return from Arizona to host Eastern Washington at 1 p.m. on Wednesday, Dec. 22 before going on Christmas Break. The Eagles are currently 5-5 on their season and will play Multnomah on Wednesday in their only game before traveling to Lubbock.