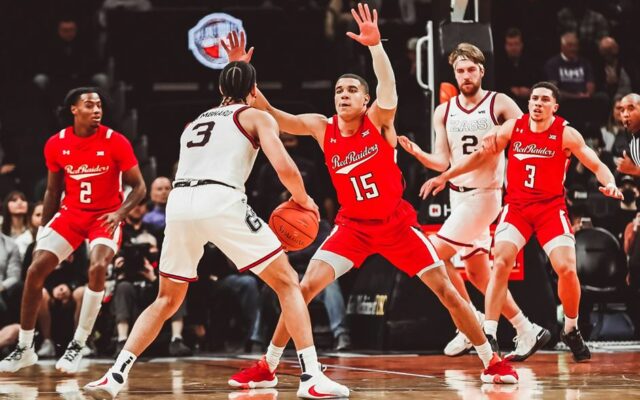 PHOENIX, Arizona – No. 25 Texas Tech fell 69-55 to No. 5 Gonzaga at the Jerry Colangelo Classic on Saturday at the Footprint Center with the Bulldogs hitting 13 3-pointers to pull away in the second half.

The Red Raiders (8-2) trailed 34-26 at halftime and would go on an 8-0 run to close the gap to 42-40 with 14 minutes to play before Gonzaga (9-2) responded with a run of its own to take a 56-42 lead. Tech, which is now 1-1 against ranked opponents this season, could never get the game back to single digits down the stretch with the Bulldogs hitting seven second-half 3-pointers.

“We felt like we were playing catch up the entire game,” Texas Tech coach Mark Adams said. “They are such an efficient team that can do so many things well. They missed some shots early and we were able to keep Timme and Chet in check which was our emphasis, but they are such a balanced offensive team with 3-point shooters who hit big shots. The thing that jumps out to me is the 3-point shooting. They are a veteran team that doesn’t make many mistakes.”

Kevin McCullar led Tech with 14 points and 10 rebounds to secure his first double-double of the season and third of his career, while Adonis Arms also had 14 points in his first start of the season. Kevin Obanor finished the game with nine points and four rebounds and Daniel Batcho led the reserves with four points and three rebounds. Arms was 3 of 7 on 3-pointers, while Obanor, Bryson Williams and Davion Warren hit threes. Warren had five points, five rebounds and a team-high three assists in the game and Williams scored five points from the starting lineup. The Red Raiders played the game without Terrence Shannon, Jr. and Mylik Wilson who were both out with injury.

Tech finished the game with a 26-16 scoring advantage in the paint, but was only 6 of 19 on 3-pointers while Gonzaga knocked down its 13 from beyond the arc. The Bulldogs had a 37-36 rebounding advantage in the game led by Chet Holmgren who had 11 rebounds and five points. Andrew Nembhard led the Bulldogs with 16 points after going 4-for-8 on 3-pointers while Rasir Bolton had 15 points by going 5 of 10 on 3-pointers. Drew Timme was limited to seven points and four rebounds.

Gonzaga led 34-26 at halftime after a Batcho block and dunk at the buzzer made it an eight-point game at the break. McCullar led the Red Raiders with eight points and six rebounds at the break, while Warren provided five points and three rebounds. Arms and Obanor had four points each. Tech was shooting 11-for-27 (40.7 percent) and just 2 of 7 on 3-pointers, while the Bulldogs were 6-for-17 on 3-pointers and were also shooting 40 percent by going 12-for-30 from the field at the break. Tech owned a 16-10 scoring advantage in the paint and had a 21-17 rebounding advantage going into the second half. Bolton was leading Gonzaga with nine points after hitting three 3-pointers in the first half, while Holmgren had six rebounds and three points.

Tech is now 3-1 all-time against the Bulldogs, including NCAA Tournament wins in 2005 (second round) and 2019 (Elite 8). The Red Raiders also claimed an Alaska Shootout win in 2007 and are now 1-1 all-time against Gonzaga in regular-season matchups.

KEY MOMENTS
SECOND HALF
Obanor and Williams hit back-to-back 3-pointers to begin the second half to keep pace with Gonzaga who got two 3s from Bolton to make it 42-32… Obanor got inside for a layup to cut Gonzaga’s lead to 42-35 five minutes into the second half
Arms hit his second 3-pointer of the game off an assist from Nadolny to cut it to 42-38 with 14:45 remaining in the game… Tech was 3-for-4 on 3-pointers to begin the second half
Tech went on an 8-0 run with Nadonly making a layup to take the score to 42-40 before Nembhard and Watson hit 3-pointers to end the run… The Bulldogs went on a 11-2 run to take a 53-42 lead at the under-12 media timeout
Gonzaga was on an 8-0 run and led 56-42 after a Strawther 3-pointer with 11:23 to play… McCullar ended the run with a layup that was goaltended
Gonzaga led 62-47 at the under-8 media timeout with Tech missing four straight shots and the Bulldogs hitting 6 of its last 8 after a Hickman jumper
Arms hit his third 3-pointer of the game to make it 64-50 and give him 10 points… It was Tech’s sixth 3-pointer of the game (6 of 17)
FIRST HALF
Gonzaga won the tip and scored on its first possession with Timme hitting one of two free throws after being fouled by Warren… Tech scored on its first possession of the game with Arms hitting the second of two free throw attempts to tie the game at 1-1
McCullar would hit Tech’s first field goal of the game with a runner on the second possession for a 3-1 lead one minute into the game… Arms hit Tech’s first 3-pointer of the game to tie it at 6-6 with a corner 3 with 17:25 on the clock
Williams hit a floater over Timme to cut Gonzaga’s lead to 12-8 with 14 minutes to play… McCullar hit a layup to make it 15-10 with 11:24 on the clock… It was McCullar’s second basket and took Tech to 4-for-14 shooting at that point in the game
Warren drilled a 3-pointer off an assist from Arms to cut the deficit to 20-13 with 8:01 on the clock… Gonzaga responded on the other end with a Bolton 3-pointer to push their advantage back to double digits
Tech went on a 5-0 run with Obanor starting it with putback dunk on a McCullar 3-point miss and McCullar made a layup on the next possession to cut the deficit to 26-17 before a Nadolny free throw… Gonzaga ended the run with another Bolton 3-pointer
Warren hit his second basket and cut Tech’s deficit to 29-22 (2:42)… Batcho would close out the half with a block on defense that resulted in a dunk at the halftime buzzer
UP NEXT: The Red Raiders return to action with a three-game home stand beginning with a non-conference contest against Eastern Washington at 1 p.m. on Wednesday, Dec. 22 at the United Supermarkets Arena. Tech is currently 6-0 at home this season and is on a 12-game non-conference home winning streak after knocking off Arkansas State. The team will also host Alabama State on Dec. 28 before opening Big 12 play against Oklahoma State on Jan. 1, 2022 at the USA.