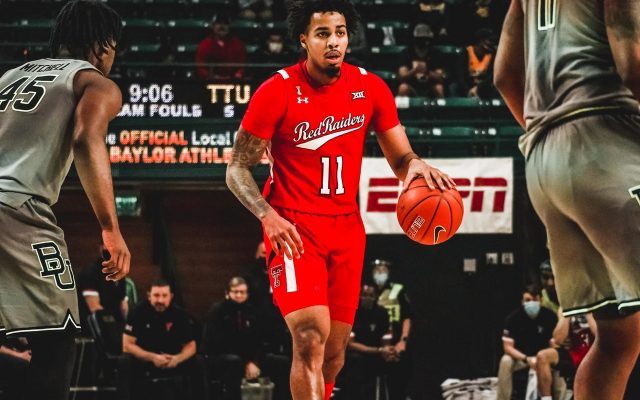 WACO, Texas – No. 18 Texas Tech had its three-game winning streak end with an 88-73 loss to No. 3 Baylor on Sunday at the Ferrell Center with the Bears hitting 10 3-pointers in the second half and 15 total for the game. Tech completed its regular season with a 17-9 overall record and 9-8 mark in conference play going into this week’s Big 12 Championship at the T-Mobile Center in Kansas City.

The Red Raiders trailed 10-0 to start the game but would fight back to make it 34-32 at halftime before seeing the Bears knock down 10 of 17 3-pointers in the final 20 minutes. BU (21-1, 13-1 Big 12), which won the Big 12 regular-season championship for the first time in its program history, would earn the win in the regular-season finale though by going 15-for-24 on 3-pointers. Tech will be the No. 6 seed in this week’s Big 12 Championship with its opponent to be determined by tonight’s Texas at TCU result. Tech will play at 8:30 p.m. on Thursday.

BU swept the season series against TTU after also securing a 68-60 win in Lubbock and have now won four in a row against the Red Raiders. Tech has lost five straight in Waco. The Red Raiders had held its previous three opponents under 60 and came into the game holding teams to 62.3 points per game for the season.

Kyler Edwards led the Red Raiders with 18 points after going 7-for-10 from the field, including hitting 4 of 6 on 3-pointers. Edwards, who scored a season-high 20 on Tuesday against TCU, also added four assists, five rebounds, two steals and two blocked shots against the Bears. Kevin McCullar and Terrence Shannon, Jr. also scored in double digits with 11 points each in the game, while Marcus Santos-Silva had eight points and three blocks.

Macio Teague led Baylor by matching a program record with 10 3-pointers in a game where he scored 35 points. Teague was 10 of 12 on 3-pointers for the Bears while Jared Butler had 18 points and five assists. Davion Mitchell led BU with seven assists and also had 17 points as the Bears improved to 11-0 at home this season. Mark Vital recorded a double-double with 15 rebounds and 10 points.

Tech finished the game shooting 45.8 percent from the field and was 9-for-18 on 3-pointers, including Shannon going 3-for-3 from beyond the arc. Mac McClung finished with seven points with one 3-pointer, while Avery Benson also hit one. The Red Raiders committed only seven turnovers in the game and forced 12 from the Bears.

Tech fell behind 10-0 before McCullar got the Red Raiders on the board for the first time by hitting one of two free throws four minutes into the game… Edwards hit Tech’s first shot with 14:38 on the clock to make it a 12-3 deficit.
Shannon hit a 3-pointer and was followed by Nadolny making a layup for a 5-0 Tech run that made it 16-8 (1H, 12:53)… McClung popped another 3-pointer for the Red Raiders to take the score to 19-11 (10:30).
Edwards would hit three 3-pointers to make it 25-22… His third came with 5:04 on the clock and gave him 11 points at that point in the half… Tech was 5-for-9 on 3-pointers after Edwards hit his fourth.
Shannon tied the game at 25-all by banking in a 3-pointer with 3:57 until halftime.
Santos-Silva made a tough inside basket to cut the BU lead to 65-57 but the Bears responded and took a 70-57 lead with six minutes to play…
Shannon hit a 3-pointer off an assist from Edwards to make it 57-47 before an Edwards steal and Agbo layup cut it to eight.
Baylor went on a 9-0 run to take a 53-42 lead before a Peavy layup stopped the run and cut it to nine with 12 minutes to play.
Santos-Silva hit two free throws and then a layup on the next possession to tie the game at 36-all with 19 minutes to play… He had six points of Tech’s 10 points in the first four minutes of the second half with Baylor leading 44-42 at the first media timeout of the second half.