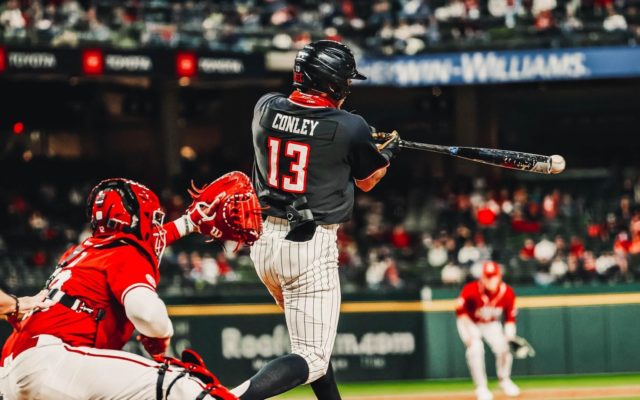 ARLINGTON, Texas – A five-run third inning gave No. 6 Ole Miss enough cushion to hold off a late rally as No. 3 Texas Tech Baseball fell 5-4 to the Rebels on Sunday in its second game of the State Farm College Baseball Showdown at Globe Life Field in Arlington, Texas.

The Red Raiders (0-2), who jumped out to a 2-0 lead on a Nate Rombach home run in the second, trailed 5-3 heading to the ninth. With two on and two outs, Cal Conley delivered an RBI single to make it a one-run game. Tech then loaded the bases for Easton Murrell, who worked a full count before flying out to deep right center.

Conley finished 2-for-5 with the RBI, a double and a career-high two stolen bases. He leads the team with four hits and four RBI on the season.

Rombach and outfielder Dylan Neuse provided support offensively, both going yard in the contest. Rombach, who finished 2-for-4, and fellow catcher Braxton Fulford have two of the team’s three home runs early on as Fulford went yard Saturday against No. 8 Arkansas.

Neuse finished 1-for-3 with a pair of walks and went opposite field for his home run. It narrowly left the yard near the right field foul pole during the sixth inning to help chip away at the Rebel lead and make it 5-3.

Freshman left-hander Brendan Girton gave the Red Raiders 3.1 shutout innings out of the bullpen in relief of starter Micah Dallas (0-1), who exited in the third. Dallas allowed just two walks his first time through the lineup, but ran into trouble with two outs in the third as a two-run home run from Rebel Jacob Gonzalez evened the score at 2-2 and a pair of defensive miscues allowed Ole Miss to tack on three more.

Girton is the sixth pitcher to make his collegiate debut for the Red Raiders this season after five received time on the mound Saturday. His 3.1 innings of scoreless relief were the second-most by a Red Raider dating back to 2019 behind Micah Dallas’s 4.0 against Stanford last season.

Starter Gunnar Hoglund (1-0) picked up the win for Ole Miss, allowing three runs on three hits over 5.1 frames. He pitched to one batter after giving up the home run to Neuse and finished at 95 pitches.

UP NEXT
The Red Raiders close out the State Farm College Baseball Showdown on Monday with an 11 a.m. first pitch against No. 7 Mississippi State. Left-hander Mason Montgomery gets the start for Tech, while the Bulldogs’ starter is currently TBD.

INSIDE THE MISSISSIPPI STATE SERIES
Sunday’s meeting will be the third all-time between the Red Raiders and Rebels, who have split the first two matchups. It will be the second time the two teams have met in an MLB stadium with Minute Maid hosting their battle in 2017. The programs met for the first time at the 2014 College World Series as the Rebels survived an elimination game.