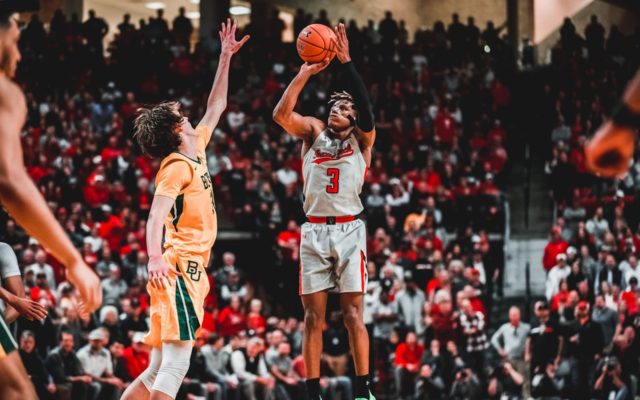 LUBBOCK, Texas – Texas Tech freshman Jahmi’us Ramsey scored 14 of his team-leading 20 points in the second half but it wasn’t enough as No. 4 Baylor pulled out a 57-52 win over the No. 22 Red Raiders on Tuesday at the United Supermarkets Arena.

Texas Tech was limited 37.0 percent shooting from the field, was 5 of 12 from the free-throw line and was out-rebounded by a 44-24 margin in its first defeat on its home court since January 16, 2019. The Bears finished the game with 17 offensive rebounds and led by as many as eight points before Chris Clarke cut Tech’s deficit to two at 52-50 with a layup and free throw to convert an and-one for the Red Raiders before the Bears closed out the game with five free throws to seal the win.

“We prepare for close games,” Texas Tech head coach Chris Beard said. “We have a plan, it starts way back in the summer, fall and preseason. So tonight, Texas Tech versus Baylor, we find ourselves in another one of these games. We certainly have some catching up to do. They start the final four minutes up five or six. So, we are going to have to play almost perfect to get it done unless they derail. We played pretty well to get it to two there, but we had a bad turnover late. You have to make a shot late in order to win one of those games coming from behind. I liked our poise tonight, playing two or three freshmen at the same time in some cases. We are going to be back in this situation a lot if we are going to have the type of season that we want to have.”

Tech is now 46-20 all-time against Baylor on its home court and will get its opportunity to even the season series on Monday, March 2 in Waco. The two programs have split their season series four straight seasons.

Ramsey, who has now led the team in scoring in seven of the 10 games he’s played in, scored 20 or more points for the fourth time this season and is now averaging 17.7 points per game. He finished the game shooting 7-for-17 from the field, including matching a career-high with five 3-pointers. His first big 3 of the second half cut it to 37-34 and the fourth of the second half made it 47-43 with 4:12 to play. Kyler Edwards finished the game with 10 points, including hitting two 3-pointers while Terrence Shannon, Jr. led the team with seven rebounds. TJ Holyfield added five points and five rebounds and Davide Moretti scored eight points.

The Red Raiders finished the game shooting 20 of 54 from the field and were 7-for-23 on 3-pointers, while Baylor was 22 of 51 and 4-for-13 on 3-pointers. Both teams struggled at the free-throw line with Baylor at 9-for-17 but making their down the stretch to earn the road victory.

“If you get a good look, you have to make it because it won’t happen a lot,” Beard said. “I thought we had some good looks but it’s not like we got a ton of them. I think when you are coming down the court tonight and having to work for a shot, that is a compliment to Baylor’s defense.”

Baylor led 21-18 at halftime with the Red Raiders shooting just 28.0 percent from the field, including going 3-for-13 on 3-pointers. Edwards led Tech with eight points at the break after hitting two of the team’s three 3-pointers while Ramsey had six points and Holyfield and Moretti had two each. Shannon led Tech with four rebounds and Ramsey had two assists. The Bears, who owned a 24-12 rebounding advantage in the half, shot 36.0 percent but had 12 first-half turnovers with Moretti leading the Red Raiders with two steals. The Red Raiders led 7-4 early in the game on a Holyfield layup before an 8-0 run by the Bears had them out to a 15-9 lead. Edwards ended that run with a layup and then a 3-pointer to cut it to two. Mitchell led BU with seven points, while Vital, Gillespie and Teague had four each at halftime.

“We have an everyday process and we are going to get back to it tomorrow,” Beard said. “That will start with film then getting back in the gym.”