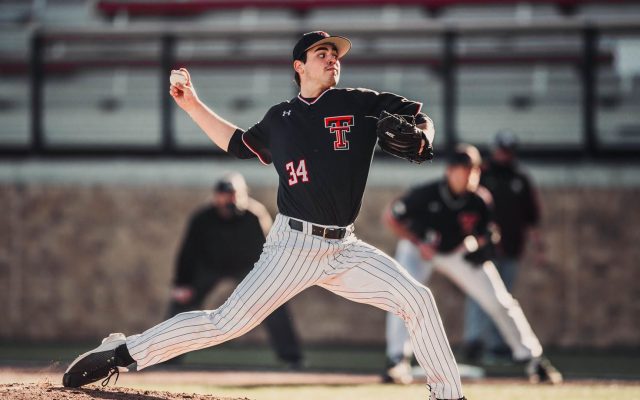 MANHATTAN, Kansas – No. 4 Texas Tech baseball received another setback on Saturday as Kansas State went yard four times to claim a 10-4 victory in the rubber match of a three-game set at Tointon Family Stadium in Manhattan, Kansas.

After opening the weekend with six home runs and 16 hits in a 17-1 win on Thursday, the Red Raiders went deep one time the remainder of the series and combined to hit 1-of-16 with runners in scoring position, including a 1-for-6 mark in the finale.

K-State started the game just as it did Friday, hitting two home runs in the first inning and jumping out to a 3-0 lead after one. Tech narrowed the gap to 3-2 in the fourth, but the Wildcats scored five in the fifth and answered a Tech response with two more in the seventh to stretch their lead to 10-4.

Dillon Carter and Cody Masters had the only RBI of the game for Tech. Carter hit a two-run double in the fourth that plated Dylan Neuse and Cal Conley, and Masters hit a two-run home run in the eighth.

Carter, who took over at the No. 3 spot in the lineup for Dru Baker, finished 1-for-2 with his second multi-RBI game in six starts this season. Masters, meanwhile, recorded his fourth dinger of the season as all seven of his hits this year have been for extra bases.

Seven pitchers received time for the Red Raiders on Saturday as starter Mason Montgomery exited the game in the first after allowing three runs on three hits. Ryan Sublette gave Tech 3.1 innings of relief as the junior allowed one run on three hits in his longest outing of the season.