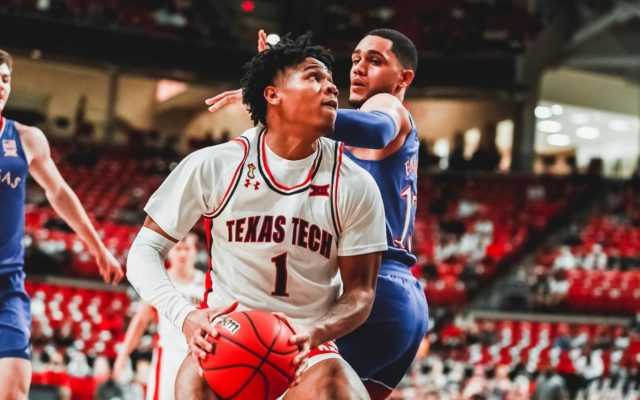 LUBBOCK, Texas – Terrence Shannon, Jr. hit a 3-pointer with 34 seconds to play to give No. 14 Texas Tech a one-point lead over No. 5 Kansas before a Ochai Agbaji jumper would prove to be the game-winner with 13 seconds remaining to lift the Jayhawks to a 58-57 win in the Big 12 opener on Thursday at the United Supermarkets Arena.

The Red Raiders (6-2, 0-1 Big 12) had a final shot to win the game but a Shannon jumper was blocked as time expired. Shannon finished the game with a season-high 20 points and nine rebounds, while Mac McClung led Tech with his season-high of 21 points. Shannon, who scored 13 of his 20 points in the second half, went 4-for-7 from the 3-point line and was one rebound shy of his first career double-double. Tech had a four-game winning streak snapped with the loss, while KU (7-1, 1-0 Big 12) has now won seven in a row.

“Give Kansas a lot of credit, it’s what they do,” Texas Tech coach Chris Beard said. “You could write a book on how many great games Kansas gets in that are one or two-possession games and what their winning percentage is under Bill Self. It’s amazing and you’ve got to give him a lot of credit. Tonight isn’t one of those that we’ve been in before where we just felt like it came down to the last play.

“I don’t think it should’ve come down to the last play. A lot of this was self-inflicted tonight. We got veteran players that are zeroes across the stat sheet that’s not going to get it done. You’ve got to make free throws in a Big 12 game at home and in an out of bounds play at the end you got to find a way to make the play where the other team doesn’t beat you on a layup. We practice those things and certainly during the timeout we were talking about that the whole time. Give Kansas credit, we just didn’t get it done. Didn’t coach well enough, didn’t play well enough down the stretch.”

Tech struggled shooting throughout the night against the Kansas defense, finishing the game 20-for-62 (32.3 percent) from the field and 6-for-23 on 3-pointers. The team also went just 11-for-18 (61.1 percent) at the free-throw line, while Kansas made 14 of 15 at the line and shot 40.4 percent from the field. The Red Raiders trailed 29-26 at halftime but would lead by as much as seven with 10 minutes remaining in the game as they stayed in the game despite the shooting struggles by committing only seven turnovers and forcing 16 from KU.

Micah Peavy finished the game with eight points and six rebounds in a strong performance from the freshman, while Tyreek Smith led the reserves with four points and a block. McClung led the Red Raiders in scoring for the fifth time in eight games after going over 20 points for the third game. He finished the night 5-for-16 from the field with two 3-pointers and added nine points to his total with a 9-for-10 performance at the line. Marcus Santos-Silva and Kyler Edwards were both held scoreless in the game. Santos-Silva finished with five rebounds and led the team with three assists and two blocks.

Agbaji led Kansas with 23 points after hitting four 3-pointers and going 8-for-11 from the field, including the game-winner. Marcus Garrett added 10 points, while Jalen Wilson and David McCormack had seven each. Garrett secured a double-double with 10 rebounds to go along with his 10 points and Christian Braun had a 10-rebound performance in a game where KU had a 40-35 rebounding advantage.

Shannon reached 20 points for the second time in his career with his career-high coming with a 24-point performance last season at DePaul. With Shannon and McClung both over 20, it was the last time two Tech players had scored 20 or more in a game since Edwards and Jahmi’us Ramsey both scored 20 last season against Cal State Bakersfield.

Kansas has now won three straight over the Red Raiders after sweeping the series last season and owns a 38-6 advantage in the all-time series. The two teams will play again on Saturday, Feb. 20 in Lawrence, Kansas.

KEY MOMENTS
Shannon hit a 3-pointer with 34 seconds to play to give Tech a 57-56 lead… Agbaji responded for Kansas though with a layup in the paint with 13 seconds to play for the game-winner.
Peavy extended a Tech run to 12-0 and gave the team a 38-34 lead with back-to-back putbacks… The run started with McClung’s 4-point play and also included him hitting two more free throws.
Exchange of runs… Tech went on another run, this one 6-0 with another Peavy putback to cap it before KU went on a 7-0 run to tie the game at 46 going into the U8 media timeout. A Shannon free throw stopped the run and gave Tech a one-point lead.
McClung hit a 3-pointer to open scoring for the Red Raiders on their second possession off an assist from Edwards… He gave Tech a 5-2 lead on the second possession with a layup.
McClung made a 3-pointer and hit a free throw for a 4-point play to cut into the KU lead to 34-30… Two free throws on the next possession gave him 19 points and made it a two-point game.
Shannon hit two 3-pointers in the first half. He first gave Tech a 14-11 lead off an assist from McClung… He would make his second with five seconds remaining to cut KU’s lead to 29-26.
Smith had a highlight-reel sequence with a blocked shot on defense before racing down and getting an offensive rebound and put-back layup to give Tech a 7-2 lead early in the game.
KU took its first lead with a 6-0 run to go ahead 19-16 capped by a McCormack dunk… McClung stopped the run with a layup with 6:34 remaining in the first half.

AT THE HALF: McClung had 13 points to lead the Red Raiders who were trailing 29-26 at halftime to the Jayhawks after leading for 8:05 in the half. Tech, which trailed at the half for only the second time this season, finished the first half shooting just 32.1 percent and was 3-for-10 on 3-pointers, while Kansas was shooting 40.9 percent but only 2-for-8 on 3-pointers. Shannon had two 3-pointers at the break and seven points, while Peavy, Smith and Burnett had two each. Agbaji led the Jayhawks with 12 points by going 4-for-5 from the field in the first half and 3-for-4 at the line. Tech was 5-for-7 at the free-throw line and had committed only five turnovers at the half.

UP NEXT: Texas Tech returns to action against Oklahoma on Tuesday, Dec. 22 at the Noble Center in Norman, Oklahoma. The team will return home to host Incarnate Word on Dec. 29 at the USA.