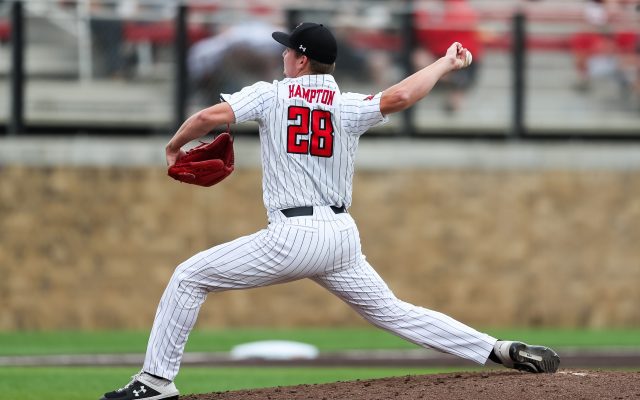 OKLAHOMA CITY – No. 5 Texas Tech jumped out to an early lead and got a terrific start from Mason Montgomery to secure an 11-4 victory over Baylor in the first round of the 2021 Phillips 66 Big 12 Championship on Wednesday morning in Oklahoma City.

Montgomery (4-3) struck out 11 and allowed just two hits over five scoreless frames. The sophomore left-hander struck out the side in the first and the fourth before exiting the game with an 8-0 lead. It marked the most strikeouts ever by a Red Raider in a Big 12 Championship game as Tech pieced together the final four innings with five different arms out of the bullpen.

Dru Baker and Nate Rombach led the Red Raider attack offensively, combining to go 7-for-9 with six RBI and five runs scored. Baker set the tone from the start with a leadoff home run in the bottom of the first that led to a 3-0 Red Raider lead after one. He added a single in the second and an RBI double in the third to start the day 3-for-3 with two RBI and three runs scored in the first three innings alone. He finished 4-for-5 with three RBI, three runs, and two stolen bases.

Rombach followed his lead with a double in the third that started a two-run inning and a two-run homer in the fourth as the Red Raiders built an 8-0 lead through four. Rombach later added an RBI single in the seventh to help Tech answer the only crooked number the Bears posted, coming in the top of the seventh. The freshman first baseman has been on a tear over the last three games, going 6-for-9 with two home runs and six RBI.

All nine starters reached base safely for the Red Raiders as Tech drew 12 walks on the day to set a program record for a Big 12 Championship game. The 11 runs were the most it has scored at the event since 2001.

Braxton Fulford and Easton Murrell drew three walks each while Murrell joined Baker in scoring three times. Rombach and Cal Conley also scored twice for the Red Raiders who plated a run in every inning except two.

Conley plated an RBI single in the first and Dillon Carter followed by recording one of his two RBI on the day with a bases-loaded walk to cap off a three-run first. Leading 4-0 going to the third, Rombach hit the first of three doubles in the frame as Baker drove in Rombach and Fulford followed by switching places with Baker.

The Bears got on the board in the sixth, but Tech responded as Murrell led off with a walk and scored on an RBI single from Baker.

Jack Pineda and Jared McKenzie combined for four of the Bear’s seven hits as Baylor trimmed the Tech lead to five with a three-run seventh. Tech, however, got two runs back in the home half of the frame thanks to a Rombach RBI single and a Carter groundout that scored Murrell.

The third-seeded Red Raiders advance to play the winner of the No. 2 vs. No. 7 battle between TCU and Kansas State. The second-round matchup is scheduled for 4 p.m. Thursday.