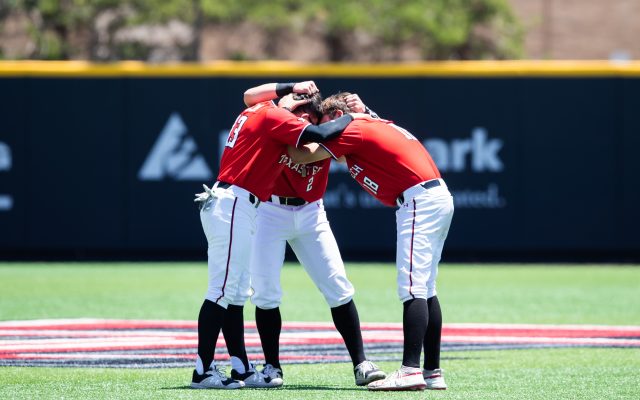 LUBBOCK, Texas – No. 5 Texas Tech capitalized on seven RBI from the bottom of its lineup and six strong innings from Micah Dallas Friday afternoon to even the series with Kansas after a 13-4 victory inside Dan Law Field at Rip Griffin Park.

The Red Raiders, who clinched the No. 3 seed in next week’s Phillips 66 Big 12 Championships with the win, pounced on Kansas (30-25; 8-15) early, scoring each of their 13 runs within the first five innings, essentially erasing a two-spot from the Jayhawks in the top half of the first.

Kansas struggled with its command on the mound throughout the loss, issuing 17 walks to the Red Raiders (34-13; 13-10), which matched the Tech single-game record that was most recently set in 1999 versus Howard. It marked the first Big 12 contest where the Red Raiders drew at least 17 walks in a game as the only other two occurrences came in 1996 against Baylor and in 1995 versus West Texas A&M.

Every starter in the Tech lineup drew at least one walk in the win, setting the stage for the bottom of the lineup to have a strong day. Nate Rombach led the way, finishing 1-for-2 overall with three RBI after a sacrifice fly in the opening frame followed by a run-scoring single in the fourth and a bases-loaded walk in the fifth.

Dillon Carter and Parker Kelly joined Romback with multi-RBI performances after driving in a pair of runs each from the No. 8 and 9 spots. Carter powered a two-run double to the gap in center as part of a four-run fifth inning, which was followed by a sacrifice fly by Kelly, who, like Rombach, drew a bases-loaded free pass of his own to close a four-run first.

Jace Jung kick-started Tech’s big day at the plate with a two-run opposite field blast in the first inning that marked his team-leading 20th home run of the season. The home run, his second of the series, is one off the national lead and places him in a tie for third all-time in Tech single-season history as his 20 long balls are the most by a Red Raider since Josh Brady had the same amount in 2004. He is also the first Big 12 freshman to hit 20 home runs since Matt Hopper from Nebraska had 21 in 2000.

The offensive output was more than enough for Dallas (4-2), who recovered from a Skyler Messinger RBI single and Dylan Ditzenberger sacrifice fly in the first to blank the Jayhawks over the next five innings. Both runs went unearned to Dallas in the first as he surrendered just five hits while striking out six with no walks over his six complete innings.

Levi Wells tossed two innings in relief of Dallas, giving up a pair of runs in the eighth as part of three hits and three strikeouts. Chase Webster enters to throw a scoreless ninth, navigating around only a leadoff walk.

Kansas starter Eli Davis (6-6) took the loss in a short outing where he lasted only one complete inning after allowing six runs (four earned) off three hits and five walks. The Jayhawks turned to six relievers the rest of the way, escaping a pair of jams with bases-loaded double plays to end the sixth and eighth innings.