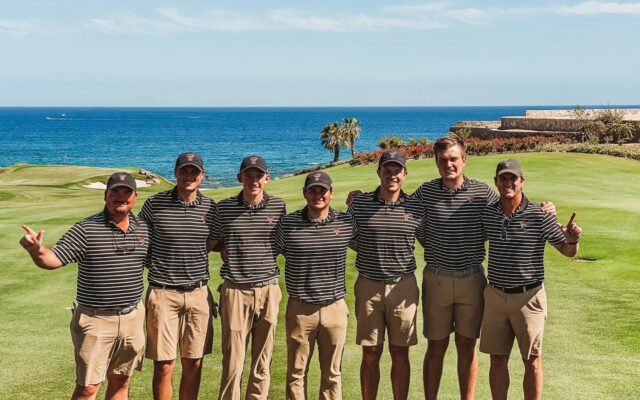 CABO SAN LUCAS, Mexico – No. 6 Texas Tech finished as the Cabo Collegiate runner-up at 30-under-par while junior Ludvig Aberg earned fifth individually at 11-under in the three-day event that was completed on Tuesday afternoon at the Cabo del Sol – Cove Club Course.

Aberg shot a career-low round of 8-under, 63 in the final round to soar up the leaderboard to tie for fifth in a tournament where Cole Sherwood (Vanderbilt) won at 17-under after firing a 61 in his final round. Baard Skogen finished 20th overall at 6-under, while Andy Lopez shot 5-under to finish 24th and Calum Scott took 35th at 2-under. Garrett Martin fought back from a rough opening round to shoot a 4-under, 67 on Tuesday.

Aberg was coming off winning The Prestige last week and finished the event with a 74-65-63 – 202 scorecard. At No. 3 in the World Amateur Golf Ranking, Aberg has back-to-back top-5 finishes for the first time this season after finishing with a career-best two eagles and to go along with six birdies. He finished the tournament by running off four straight birdies to get to 11-under. Skogen is at No. 7 in the Golfstat rankings after two runner-up finishes this season and claimed 20th after posting 68-73-66 – 207 on the board. Aberg and Lopez both had 15 birdies in the event, while Skogen had 13.

Tech has now finished as tournament runner-ups twice this spring after opening with a second-place finish at the Amer Ari in Hawaii.

The Red Raiders will follow this week’s event in Mexico with a couple of weeks off before returning to competition at the Valspar Collegiate from March 28-29 in Palm City, Florida before playing in the Aggie Invitational (April 9-10) in College Station and Thunderbird Collegiate from April 15-16 in Phoenix. The Big 12 Championship is scheduled for April 25-27 in Trinity, Texas which will lead into the NCAA Tournament.