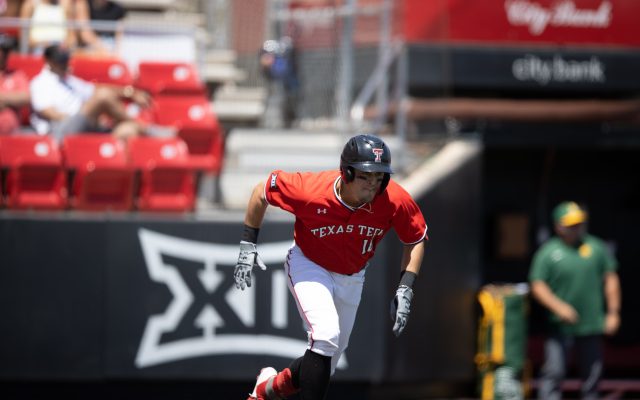 AUSTIN, Texas – After play was suspended Saturday afternoon due to rain with a 5-3 Texas Tech lead, the No. 11 Red Raiders returned on Sunday to record the final four outs and pick up a 5-3 victory over No. 3 Texas to secure the series win at UFCU Disch-Falk Field in Austin, Texas.

The Red Raiders (30-10; 10-7) will go for the sweep against the Longhorns (34-11; 12-5) later in the day after closing game two by stranding the bases loaded with the final out of the eighth before recording three more outs in the ninth.

The win gives Tech its fourth series win in Austin in five tries under head coach Tim Tadlock. It is the first series loss of the season for Texas as it falls to 23-4 at home with half of their home losses coming this weekend.

The Red Raiders struck first in game two with a five-run sixth before the Longhorns rallied with a run in the seventh and two in the eighth before play was suspended.

The two clubs returned to the field on Sunday with the Red Raiders clinging to a 5-3 while the Longhorns threatened to tie or take the lead with the bases loaded and two away. Tech went to Ryan Sublette, who tossed 2.2 shutout innings in the win Friday, looking to survive the threat, and the junior needed just three pitches to sit down pinch hitter Silas Ardoin.

In the ninth, Sublette got a fly ball to right field and a strikeout for the first two outs. Center fielder Dylan Carter recorded the final out with a highlight worthy grab as he went airborne to haul in a deep fly ball before crashing into the wall.

Tech got a terrific start from Micah Dallas (2-2) as he struck out eight and allowed just five hits and no walks through seven innings. He recorded one out in the eighth before a single, double and a walk loaded the bases for Texas. Freshman Levi Wells came on in relief and walked in a pair of runs before recording a strikeout for the second out of the inning before the game entered a rain delay.

Parker Kelly got the rally started in the sixth inning as he reached on a hit by pitch. Dru Baker followed with a double, and Easton Murrell walked to load the bases. Tech plated the first run of the game as Jace Jung was hit by a pitch, and then Cal Conley ripped a two-out double down the line to score two more and make it 3-0. Jung crossed home on a wild pitch, and Conley scored to make it 5-0 on a Cole Stilwell RBI single.

Conley’s double was his team-leading 11th of the season, while his two RBI moved him to 10 multi-RBI games this season, which ranks second on the team. Meanwhile, all five of Baker’s hits dating back to Wednesday’s midweek game against New Mexico have gone for extra bases, including three doubles this weekend.