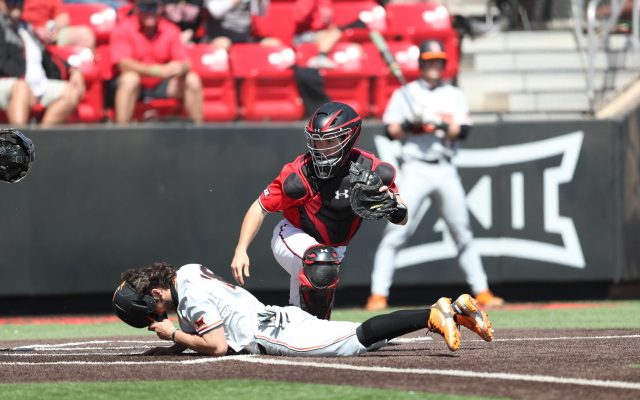 LUBBOCK, Texas – No. 7 Texas Tech baseball evened the series against No. 14 Oklahoma State with a 4-2 win on Saturday in front of its second consecutive sold out crowd at Dan Law Field at Rip Griffin Park.

Patrick Monteverde (4-0) allowed one run over 6.0 innings, and Micah Dallas took it from there with five strikeouts over the final 3.0 frames to earn his first save of the season.

The Red Raiders (15-4, 1-1) received a strong defensive performance from Jace Jung at second base that took away three hits and saved at least one run. The Tech defense entered the weekend second in the country in double plays, and added three more to its tally on Saturday.

The defense was key in limiting the Cowboys (12-4-1, 1-1) to just one run through eight innings. Tech also threw out a runner attempting to steal home in the third inning and worked out of jams in the fourth and ninth frames. Jung made a leaping grab on a line drive in the fourth to leave runners on the corners. In the ninth, Dallas left the tying run at second base with a fly ball to left for the final out.

Overall, the Red Raiders finished with six hits in the game to OSU’s nine. It was the sixth time in eight games this season Tech has won despite being outhit by the opponent. The Red Raiders also improve to 8-2 in games decided by two runs or fewer.

Dru Baker and Kurt Wilson led the Red Raiders offensively with four of the team’s six hits. Baker, who has now hit safely in six consecutive games, went 2-for-4 at the top of the lineup for his team-leading ninth multi hit game. Wilson, meanwhile, finished 2-for-3 and hit his first home run of the season during the third inning, a solo shot to left that opened the scoring.

After the Red Raiders took a 1-0 lead in the third off the Wilson blast, OSU responded in the top of the fourth as a leadoff single got into scoring position and scored on an RBI single that sneaked through the right side.

Tech immediately recaptured the lead with a three-run fourth. Dylan Neuse led things off with a double to the gap in left center. After a Nate Rombach walk, Cal Conley laid down a sacrifice bunt that OSU starter Justin Wrobleski (1-2) threw down the right field line, allowing both Neuse and Rombach to score and Conley to reach third. Braxton Fulford would do his job and bring in Conley with an RBI groundout to give Tech the 4-1 lead.

That’s where things would stay until the top of the ninth as OSU’s first two batters reached with a base on balls and a single. Jake Thompson, who led the Pokes with three hits and two RBI on the day, hit an RBI single to center that cut the lead to 4-2 with one out. Dallas, however, would bounce back with a strikeout followed by the fly ball to left to end it.