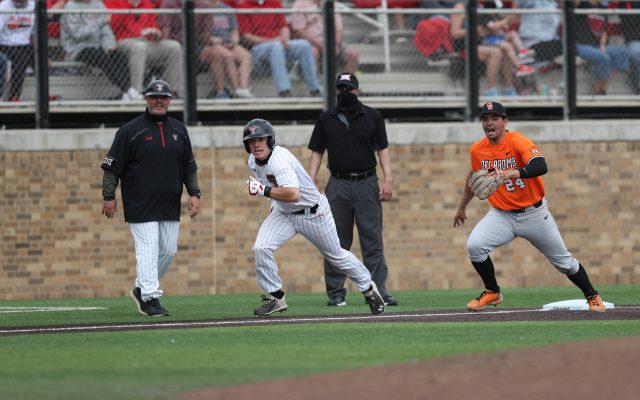 LUBBOCK, Texas – No. 7 Texas Tech baseball built a 6-1 lead and held on late for a 6-5 win over No. 14 Oklahoma State on Sunday to clinch the Big 12 series win at Dan Law Field at Rip Griffin Park.

Tech has now won 11 of the last 13 matchups against OSU, evening the all-time series at 43-43. Additionally, Texas Tech head coach Tim Tadlock is now 18-11 against his counterpart at OSU.

This is also the fifth time in eight tries Tech has won its conference-opening series under Tadlock, who moves into a tie for second place on the school’s all-time career wins list with Kal Segrist at 317 career victories.

Tadlock shuffled around the top of the lineup and received plenty of output as Dru Baker and Jace Jung, who moved to the third and fourth spots, led the attack. Dylan Neuse and Cal Conley also recorded hits as the leadoff men in the order, while Braxton Fulford and Easton Murrell anchored the back half of the lineup.

Baker had his 10th multi-hit game of the year and fifth in the last seven games, going 2-for-4. He got Tech on the board in the third with an RBI double to left that plated Neuse from second. Baker would score one batter later as Jung hit a no-doubter to right that gave Tech a 3-0 lead. It marked a Big 12-leading eighth dinger of the year for Jung, who finished 2-for-3 with two RBI and two runs.

The Cowboys got on the board with a run in the fourth, but Tech put two up in its next at bat to make it 5-1. Fulford drew a leadoff walk and scored with heads up base running after an OSU error. Conley drove in another run with a double to deep right.

The Red Raiders scored for the third consecutive inning in the fifth. Jung worked a leadoff walk and came around to score after back-to-back singles from Murrell and Fulford.

Tech carried the 6-3 lead into the ninth and looked to have full control after a leadoff single was erased with a 4-6-3 double play. The Cowboys drew three free passes and got an RBI single to trim the deficit to one. Tech cycled through three pitchers in the frame before left-hander Derek Bridges struck out OSU’s Justin Campbell to strand the bases loaded and end the game.

The Red Raiders close out their 12-game home stand next weekend with a three-game set against South Florida. The series begins Friday at 6:30 p.m. on ESPN+.