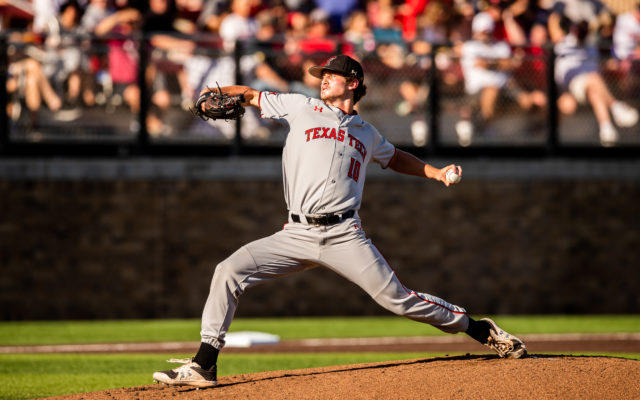 The win completes a weekend sweep of the NCAA Lubbock Regional for the Red Raiders (39-15), who will move on to face the winner of the Palo Alto Regional next weekend back in front of its home crowd. UC Irvine forced a decisive final game with host Stanford set for Monday after topping the Cardinal, 8-4, on Sunday night.

Tech broke up a tie game with a three-run third inning and then added three more in the fifth to down the Bruins (37-20), who routed North Carolina, 12-2, earlier in the day to advance to the regional final. The Red Raiders knocked in five runs with two outs on the night with four of those coming over those two innings.

Easton Murrell powered the Red Raiders at the plate, finishing 3-for-3 overall with two RBI after run-scoring singles in both the third and fifth innings. It marked a career-high for hits for Murrell, who was one of six Red Raiders tabbed to the All-Tournament Team following the game.

Murrell was one of three Red Raiders with multi-RBI nights, joining Cole Stillwell and Kurt Wilson who both drove in a pair of runs each. Stillwell broke up a 1-1 tie in the third with a two-run double to the gap in right center, while Wilson tied the game in the second with a RBI single to center and then added a RBI single to right to cap a big fifth inning.

Wilson was named the MVP of the Lubbock Regional after he hit .455 for the weekend (5-for-11) with five RBI as he returned to form after missing most of the back half of the regular season with an injury. He was 2-for-3 overall to join Murrell and Jace Jung (2-for-5) with multi-hit nights.

The strong night at the plate complimented another dominate performance by the Tech pitching staff as Mason Montgomery (5-3) picked up the win after five innings of work where he gave up two runs (one earned) off two hits and eight strikeouts.

Montgomery handed off to Andrew Devine and Derek Bridges for a shutout sixth and seventh inning before Micah Dallas struck out four Bruins over the final two frames. Over the three games this weekend, the Tech bullpen surrendered only one earned run over its 10.2 innings of work.

UCLA starter Kyle Mora (2-2), making his first start of the season and only the second of his career, took the loss for the Bruins after allowing four runs off four hits and a pair of strikeouts in only 2.1 innings. The Bruins turned to three relievers out of the bullpen to no avail as Tech scored four additional runs off seven hits the rest of the way.

UCLA got on the board early in the first with a Matt McLain sacrifice fly that was deep enough for leadoff hitter Kevin Kendall to beat out a throw from Wilson in center. It was the only RBI on the night for the Bruins as UCLA added its other run via a Tech throwing error in the third.

Dates and game times for the NCAA Super Regional are still to be determined.