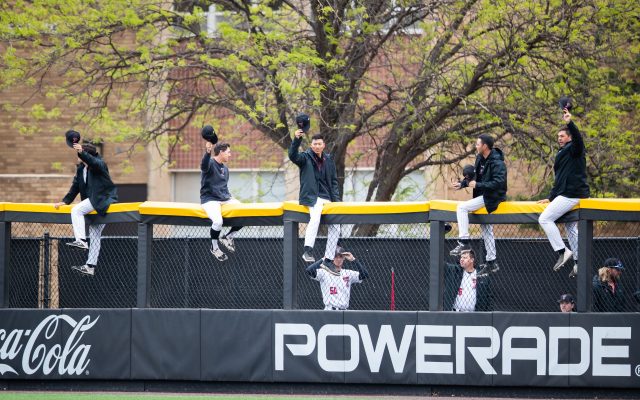 LUBBOCK, Texas – A four-run seventh helped No. 8 Texas Tech baseball come back from two runs down to complete a midweek sweep of Stephen F. Austin with a 7-5 win on Wednesday on Bark in the Park day at Rip Griffin Park.

Easton Murrell belted two home runs in the first two frames to help the Red Raiders (24-7) establish an early 3-0 lead. The Lumberjacks (12-16) used a four-spot in the third to gain a lead they held until the seventh when Tech answered with four of its own.

Levi Wells, Eli Riechmann and Connor Queen came out of the bullpen to allow one run over the final six frames, biding time until the potent Red Raider attack would pull through. It marked the third time this season Tech has come from behind after trailing through six.

The offense came alive in the seventh as Max Marusak led off with a double down the left field line and Tech would work the bases loaded with no outs. A pair of sacrifice flies from Jace Jung and Cole Stilwell tied the game, and Cody Masters followed with an RBI single that put Tech back in front, while Parker Kelly tacked on another with a bases-loaded walk.

The Lumberjacks, who fought back from down three runs to tie the game in the ninth on Tuesday, threatened in the ninth once again on Wednesday against Queen. SFA had the go-ahead run on first with the bases loaded and one out, but Queen was able to get a ground ball to Cal Conley at short for a double play to end it.

Freshman Hayde Key received his first career start and retired the first six batters he faced before running into trouble in the third inning. Levi Wells spelled Key and tossed two shutout innings with a career-high four strikeouts. Riechmann followed by pitching the sixth and seventh innings and picked up his first career win, while Queen recorded his fourth save of the year.

Designated hitter Cody Masters joined Murrell with two RBI in the game, including a sacrifice fly in the second inning and the game-winning RBI single in the seventh. Jung, who scored twice, walked two more times on Wednesday to bring his total to six walks during the two-game set.

The win moves the Red Raiders to 6-0 in midweek contests this season and 5-2 against SFA all-time. Tech has now won 35 consecutive home games against teams outside of the Big 12 dating back to 2019 and 12 consecutive midweek home games.

The Red Raiders return to Big 12 play this weekend as they travel to Morgantown, W. Va., to take on West Virginia in a three-game set at Monongalia County Ballpark. First pitch in the opener is set for 5:30 p.m. CT on Big 12 Now on ESPN+.