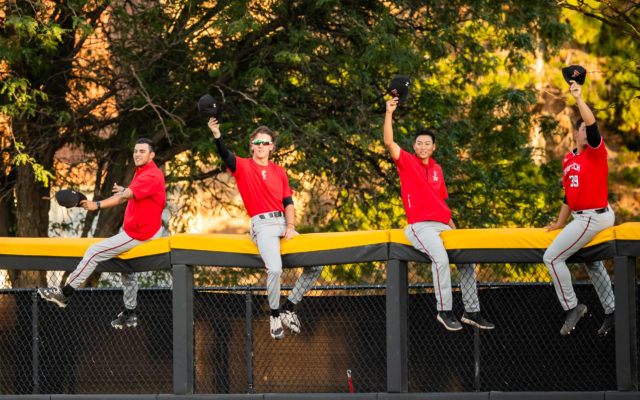 LUBBOCK, Texas – Jace Jung sparked No. 8 Texas Tech with an early home run, while Kurt Wilson added a long ball of his own as part of three RBI on the night as the Red Raiders remained undefeated in the NCAA Lubbock Regional following a 7-2 victory Saturday over North Carolina.

Jung quickly had a sold-out Dan Law Field at Rip Griffin Park on its feet with a two-run shot into the right-field bullpen that gave the Red Raiders (38-15) an early lead in the first. The home run was the 21st of the season for Jung, who moved into sole possession of third place all-time in Tech single-season history with the blast.

Wilson, meanwhile, provided the late-game heroics like he’s been known to do in the postseason. The junior padded a one-run Tech lead with an opposite-field solo blast in the seventh that hit off the right-field foul pole. He broke the game open only an inning later with a two-run single that matched Jung with a two-hit night.

From there, it was all Ryan Sublette, who closed the door on North Carolina (28-26) with 3.2 shutout innings, sending the Red Raiders to the regional championship game where Tech awaits the winner of tomorrow’s elimination game between the Tar Heels and UCLA.

Sublette struck out a career-high eight to record his third save of the season as he relieved starter Patrick Monteverde following a Mac Horvath single off the left-field wall in the sixth. Sublette entered to strike out the first two Tar Heels he faced en route to finishing two outs shy of the longest outing of his career.

Monteverde (7-3) earned the win for the Red Raiders in a strong showing of his own, surrendering just two runs off six hits and seven strikeouts over his 5.1 innings. Like Sublette after him, he also effectively fanned North Carolina throughout the night, notching seven strikeouts in his first career postseason start.

Angel Zarate scored both runs early for North Carolina early as he came around on a Horvath RBI fielder’s choice in the opening frame and then again off a Danny Serretti RBI double in the third. The Soretti double tied the game at 2-2 until Braxton Fulford delivered a two-out RBI double to the corner in left field that scored Dru Baker all the way from first base.

Tech scored four of its seven runs with two outs in the inning as Nate Rombach extended the Red Raiders’ lead with a bases-loaded walk in the eighth, followed by Wilson’s hard-hit liner that got through to left field later in the frame.

UCLA and North Carolina will begin Sunday’s elimination game at 2 p.m. with the winner facing the Red Raiders at 6 p.m. or 45 minutes following the completion of that game..