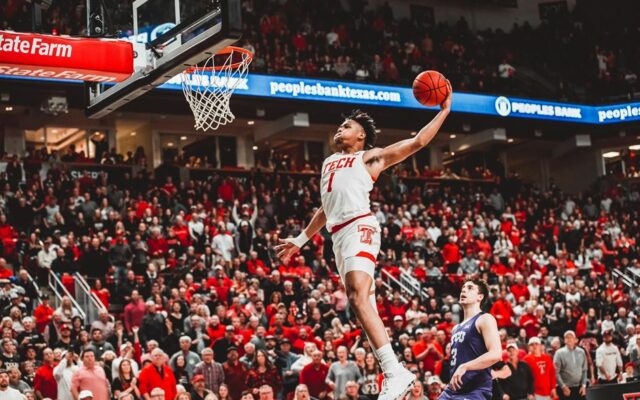 LUBBOCK, Texas – Terrence Shannon, Jr. scored 20 points and Bryson Williams added 16 as No. 9 Texas Tech rallied from being down 13 in the first half to cruise to an 82-69 win over TCU on Saturday at the United Supermarkets Arena. Tech is now 15-0 at home this season with three home games remaining and has won 18 in a row at the USA dating back to last season.

The Red Raiders (19-6, 8-4 Big 12) trailed 28-15 just 10 minutes into the game against the Horned Frogs (16-6, 5-5 Big 12) before outscoring them by a 45-29 margin in the second half. Tech, which passed its win total of 18 games in each of the past two seasons, began the second half on a 9-0 run and a 10-0 run gave it a 62-45 lead in a game that flipped quickly. Four Red Raiders would finish in double figures with Shannon recording the eighth game in his career with 20-plus points, while Williams went for 16, Davion Warren had 12 and Adonis Arms added 11. Kevin McCullar scored seven points before an injury with four minutes remaining until halftime forced him out for the remainder of the game.

The 13-point comeback is the second largest this season after Tech came back at then No. 1-Baylor which led by 15 in the first half in Waco before the Red Raiders earned the 65-62 win on January 11. Tech and No. 10 Baylor are now set for the second game of the season series at 8 p.m. on Wednesday at the USA.

”This particular game we’d already had some momentum coming back so it’s a little different,” Texas Tech coach Mark Adams said. “Our guys had seen that what we were doing now works, so we’re going to continue this and not let up again in the second half. Let’s continue to work and let’s continue what we’re doing. Let’s put the peddle to the metal and just go at them, and so we did not want to let up and not let off the gas there. I thought our guys responded well.”

Shannon, who had a season-high 23 in the home win over West Virginia, led Tech with two 3-pointers and shot 7-for-9 from the field. He also went 4-for-5 at the free throws line and added two assists and two steals.

“Coach got on us at halftime about the defense we were playing, actually in the first half,” Shannon said. “Going through it, I feel like we did a good job of closing out the first half, we stayed with it in the second half and we finished the game.”

Williams was coming off five points at OU that ended an 11-game streak in double figures and returned there with his 16 against TCU where he was 5-for-7 from the field and 5 of 5 at the free-throw line.

“I definitely think we turned it around on the defense at the end,” Williams said. We started taking care of business on that side of the floor. TCU really came out aggressive and were a really high motor on their offensive end and defensive end. Plus, they were scoring at a high rate, so we really locked in on that side and that really took the game for us.”

Arms had a team-high four assists and matched Kevin Obanor for the team-lead with five rebounds. Arms also added two steals, while Marcus Santos-Silva led the reserves with nine points, two rebounds and two steals. Obanor was held scoreless for the first time this season.

Tech finished the game shooting 53.8 percent from the field and was 5-for-9 on 3-pointers. TCU had built its lead by hitting seven 3-pointers in the first half, but was limited to just 4-for-10 from beyond the arc in the second half. The Horned Frogs committed 20 turnovers in the game to become the sixth team to have 20 or more turnovers against the Red Raiders this season. Tech limited its turnovers to 11 in a game where the rebounding numbers were even at 30-30.
Mike Miles led TCU with 16 points, while Damion Baugh added 14 and former Red Raider Micah Peavy added five as a reserve. Miles was 5-for-9 from the field while Baugh led the Horned Frogs with three 3-pointers. TCU finished the game 11-for-27 on 3-pointers.

TCU led by as many as 13 in the first half but only took a 40-37 lead into the break with Tech closing strong and pulling to within 39-37 on a Shannon steal and dunk. Shannon led the Red Raiders with 10 points at the half by going 4-for-5 from the field while McCullar had seven before going to the locker room with an injury with four minutes to play until halftime. Tech finished the first half shooting 13-for-25 from the field but was only 2-for-4 on 3-pointers, while TCU was 7-for-17 on 3-pointers. Miles led the Horned Frogs with 11 points while Peavy had eight in the first half. Tech finished the first half shooting 52 percent, while TCU was at 48 percent.

Tech improved to 86-52 all-time against TCU and is now 49-15 against the Horned Frogs in Lubbock. The Red Raiders have won three in a row in the series and 8 of 10…. Tech’s 15-0 record at home is only matched by Gonzaga and Kentucky who are also both at 15-0 in their home games after wins on Saturday.

KEY MOMENTS
Second Half
Down 40-37 at halftime, Tech took a 42-40 lead after baskets from Warren and Williams to begin the second half… Williams gave the Red Raiders their first lead with an and-one one minute into the half
Shannon gave Tech a 46-40 lead with a layup before TCU stopped the run with a Lampkin basket
Santos-Silva threw down a dunk in transition off an assist from Nadolny to give Tech a 52-44 lead five minutes into the second half
Williams drilled a 3-pointer for a 57-45 lead with 12 minutes to play… It was his first 3-pointer and gave him 12 points for the game… Tech was 3-for-6 on 3-pointers after the shot
Shannon gave Tech a 62-45 lead with a pair of baskets and free throws that pushed a 10-0 run and 14-1 overall run
Shannon drilled his second 3-pointer of the game to push Tech’s lead to 68-47 with 9:46 to play… He had 20 points after the shot that pushed the overall run to 16-2
Williams had back-to-back dunks to give Tech a 74-54 lead with 6:29 remaining in the game… He had 16 points after the pair of dunks
First Half
TCU won the tip and scored on its opening possession with a runner by Miller in the lane… Tech responded right away with a McCullar layup off an Arms assist on its opening possession to tie the game and took its first lead at 4-2 with an Arms jumper
Shannon hit Tech’s first 3-pointer of the game to cut TCU’s lead to 8-7 four minutes into the game… TCU took an 11-7 lead on the other end with a Peavy 3-pointer going into the first media timeout of the game
Williams and Warren stopped a 6-0 TCU run with a pair of dunks… Williams made his first in a halfcourt play where he fought his way inside before Warren grabbed a defensive rebound and went coast to coast to cut TCU’s lead to 14-11
TCU took a 22-13 lead with a Baugh 3-pointer, starting the game 4-for-8 from beyond the arc… Arms responded for Tech on the other end with a layup before TCU hit its fifth 3-pointer (O’Bannon) to take a 25-15 lead
McCullar made an inside shot off a Batcho assist to cut TCU’s lead to 30-20 going into the under-8 media timeout… McCullar had four points and Tech was 8-for-17 from the field after the basket
McCullar hit his second 3-pointer to cut TCU’s lead to 35-25 before assisting on a Shannon layup that turned into an and-one and a six-point swing (35-28)…
McCullar left the game with an injury with 4:08 until halftime
Arms came away with a steal and hit a fall-away jumper to cut TCU’s lead to 39-34 with two minutes on the clock… A Nadolny free throws made it 39-35 with a minute remaining
Shannon went into double figures with a steal and dunk to make it 39-37… He had 10 points and was 4-for-5 from the field after the dunk