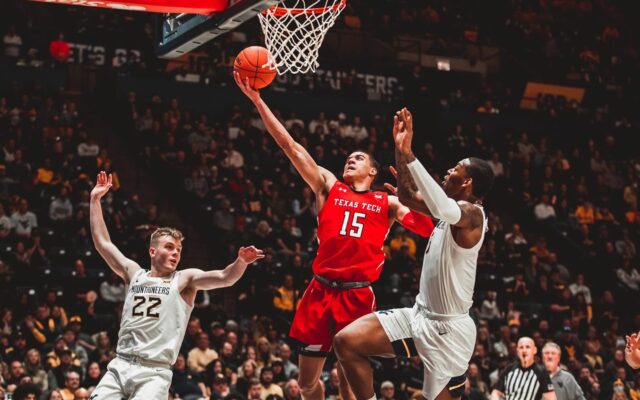 LUBBOCK, Texas – Texas Tech has earned its way back into the Associated Press Men’s Basketball Top 25 after moving up five spots to No. 9 in this week’s poll with wins over No. 20 Texas and West Virginia.

The Red Raiders (18-5, 7-3 Big 12) have now entered the top-10 of the rankings in four of the past five seasons by working their way up from being unranked to begin this year. Tech was not ranked for the first five weeks of the season before entering at No. 25 on December 13 following a win over Tennessee in the Jimmy V Classic. TTU spent four straight weeks at No. 25 before moving to No. 19, No. 18, No. 13, No. 14 and now No. 9 in the national poll.

In addition to the polls, TTU is at No. 11 in the NCAA NET Ranking and Kenpom.com. The Red Raiders are currently second in the Kenpom.com defensive efficiency rating behind only San Diego State.

Tech’s highest AP ranking in program history came at No. 6 in February, 2018 (16th Week Poll) and the program spent one week at No. 7 last season before dipping back. The 2018-19 team was No. 8 in the final week of the regular season and No. 7 throughout the postseason that led to the 2019 National Championship Final.

The Red Raiders are currently 5-3 against ranked opponents this season after its 77-64 win over the Longhorns last week in Lubbock. TTU improved to 14-0 at home with that win and now has the most home wins along with Kentucky which is also 14-0 at Rupp Arena.

Along with the polls, Tech is currently 14th nationally by holding opponents to only 38.3 percent shooting after limiting WVU to 24.2 percent for the game and 12.5 percent shooting in the second half. The Mountaineers were held to 53 points, bringing Tech’s scoring defense to 60.3 points per game which ranks 17th nationally and second in the Big 12. Tech is 11th nationally with a 14.5 scoring margin advantage over its opponents and 31st offensively by shooting 47.6 percent to go along with the stifling defensive numbers.

Texas Tech returns this week with a road game at Oklahoma on Wednesday night before hosting TCU at 3 p.m. on Saturday at the United Supermarkets Arena.