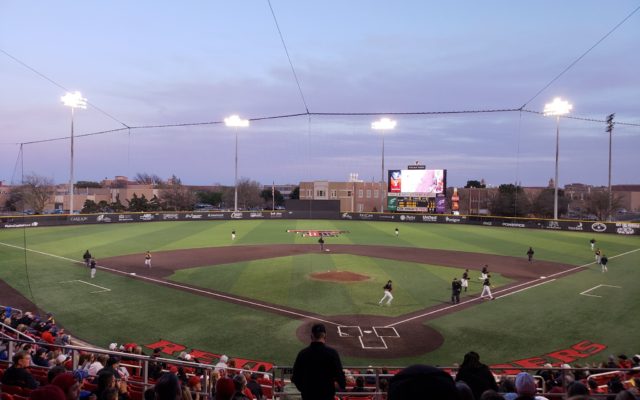 LUBBOCK, Texas – A three-run, go-ahead double by Nate Rombach in the bottom of the seventh helped No. 9 Texas Tech baseball pull out a 5-4 win over Gonzaga Tuesday night to open a two-game set with the Zags at Rip Griffin Park.

The Red Raiders (9-3) extend their winning streak to nine games after picking up their second consecutive one-run victory.

Micah Dallas gave the Red Raiders six strong innings, and Brendan Girton closed out the win with four strikeouts in 1.2 innings for his first career save.

While the Bulldogs outhit the Red Raiders, 9-6, the Tech defense created five outs on the bases, including two at home plate, both of which came in the fourth inning with the Red Raiders protecting a 2-0 lead. Dylan Neuse had the first, as he threw out a runner attempting to score from second on a base hit. Braxton Fulford and Micah Dallas connected on the second as they nailed a runner attempting to steal home on a pitch that bounced away.

Dallas’s only blemish on the day came on a solo home run in the fifth that cut Tech’s lead to 2-1. The Red Raiders maintained that lead into the seventh before a pair of unearned runs scored from a throwing error on a slow roller to third base. The defense turned it around to get out of the inning with a 1-2-5-4-6 double play that got runners out going home and going to third base.

Tech didn’t trail for long, responding in the bottom-half of the seventh. Freshman Drew Woodcox, making his third start in the last five games at first base, got the rally started with a one-out walk. Dru Baker and Neuse followed with walks of their own to set the table for Rombach’s heroics. With the bases loaded and two away, Rombach drove a 2-1 pitch to the left center gap to clear the bases and give Tech a 5-3 lead.

Gonzaga cut it to 5-4 in the eighth with an RBI on a bases-loaded hit batter. Girton recovered with his second strikeout of the frame, catching a Bulldog looking to strand the bases loaded. He went on to retire the Zags in order in the ninth for his first career save.

Rombach drove in three of Tech’s five runs in the contest. Big 12 Player of the Week Jace Jung opened the scoring with an opposite-field home run in the bottom of the first. Neuse also tallied an RBI with a run-scoring single in the third.

Freshman Levi Wells (1-0) was credited with the win for the Red Raiders, allowing one run on one hit with three walks in 1.0 inning of work. He closed out the seventh for Tech with a heads up defensive moment to start the inning-ending double play.

Gonzaga’s Nico Zeglin (1-1) received the loss, issuing a pair of walks in the bottom of the seventh that proved to be the game-tying and go-ahead run. Starter Alek Jacob allowed two runs on four hits in 6.1 inning for the Zags. Shortstop Brett Harris led them at the plate, going 3-for-5 with two doubles, while catcher Tyler Rando was responsible for the home run.