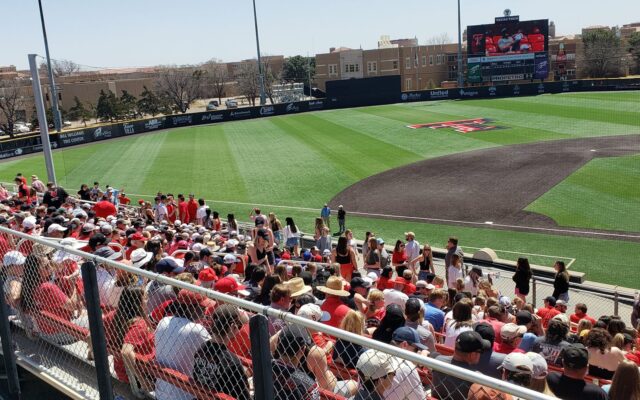 LUBBOCK, Texas – No. 9 Texas Tech dropped Tuesday night’s contest to Abilene Christian, 8-5, at Rip Griffin Park. The Wildcats pounced for seven runs in the second inning to help break a run of 12-straight losses to the Red Raiders, dating back to 1976.

Texas Tech (29-15) took an early 2-0 lead in the home half of the first when Easton Murrell singled and advanced to second on a Cole Stilwell walk. Murrell and Stilwell advanced to second and third midway through Jace Jung’s at-bat on a wild pitch. Jung later drove home Murrell on a sac-fly. On the same Jung sac-fly, Stilwell moved to third base, allowing him to score on Ty Coleman’s flyout a batter later.

Despite being staked to a 2-0 lead, Tech starter Jamie Hitt (1-1) struggled in the second, as ACU (20-20) used a home run from Miller Ladusau to spark a seven-run frame. The big blow in the second came off the bat of Grayston Tatrow who plated the final four runs of the second on an inside-the-park grand slam.

Down 7-2, Tech tried to work its way back into the contest, scoring singular runs in the third, fourth and fifth innings but could never breakthrough for a big inning. The Red Raiders loaded the bases in the second, fourth, and fifth innings but managed just the three runs. Tech finished the game 1-for-10 with runners in scoring position.

Abilene Christian’s Max Huffling, who entered in the seventh, closed the door on the game, retiring all nine batters he faced. The loss marks the Red Raiders’ second-straight home loss, the first time dropping back-to-back home games since 2016.

Jung, Sam Hunt and Kurt Wilson led the Red Raiders from the plate on Tuesday, each collecting two hits apiece. Jung closed the night 2-for-3 with an RBI, the 45th he has recorded this season, while Hunt finished with a pair of hits and a walk in three plate appearances and Wilson 2-for-5 with a double.

Quotable
Head Coach Tim Tadlock
On middle relief…
“Devine threw the fastball well, threw some secondary stuff in there. Bridges, one we got out of that one inning, he gave me as much as anyone other than Kyle and Andrew. Really for Bridges, he hadn’t been on the mound since the 14th I think, but it was really good to get him out there”

On moving forward to the weekend…
“I think anytime you lose a game or things happen in a game, I think there are always learning lessons there. Generally, you look back and think “okay pitch to pitch, inning to inning, did we do that?” I do think the effort to win was there from the start tonight. I think there was some frustration there at times, but I don’t want to take away from ACU pitchers. The last guy threw as well as anyone has thrown against us.”

Up Next
Tech has seven-straight road games ahead, with a bye weekend built-in on May 6-8 – coinciding with final exams that span, May 5-10 – before returning home to host Oklahoma, May 19-21.