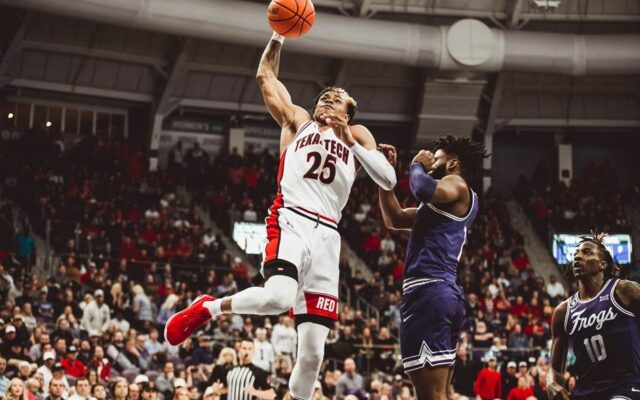 FORT WORTH, Texas – No. 9 Texas Tech and TCU split their regular-season series after the Horned Frogs rallied back from an eight-point halftime deficit to pull out a 69-66 win over the Red Raiders on Saturday at the Schollmaier Arena.

“We had a lot of turnovers and breakdowns on the defensive end that we normally don’t have,” Texas Tech coach Mark Adams said. “That was disappointing. Give TCU a lot of credit. They are a tough team that played really hard. They got some momentum and confidence going and we couldn’t get it turned around there at the end.”

The Red Raiders (22-7, 11-5 Big 12) had their four-game winning streak snapped with the loss and are now 6-3 in Big 12 play when leading at halftime after seeing a 41-33 advantage slip away. The Horned Frogs, who led 40-37 in their 82-69 loss in Lubbock, reversed the script by outscoring TTU by a 15-6 margin over the final five minutes. Tech committed a season-high 20 turnovers and finished the game with only three offensive rebounds despite owning a 25-22 rebounding advantage. TCU improved to 18-9 overall and 7-8 in Big 12 play, while Tech fell to 3-5 in Big 12 road games.

Tech will now host Kansas State at 8 p.m. on Monday in its final home game of the season. The team enters the game with a 17-0 home record and having won 20 in a row dating back to last season inside the United Supermarkets Arena.

Bryson Williams led Tech with 21 points after going 8-for-9 from the field and 4 of 4 on free throws, while Adonis Arms had 15 points and Davion Warren scored 12. The Red Raiders finished the game shooting 25-for-43 (58.1 percent) from the field and were 11 of 11 on free throws. Warren gave Tech a 66-65 lead with 1:40 on the clock before Xavier Cork had a dunk with 1:11 to play to regain the lead and then Mike Miles and Micah Peavy hit one free throw each for the three-point lead. Terrence Shannon, Jr. and Arms missed 3-pointers that would have tied it before Peavy’s last free throw.

“Both teams shot the ball well and it came down to whoever could take the ball away more because we were both scoring,” Adams said. “We were trying to do that too. We wanted to get the ball out of Miles’ hands, but that didn’t work out too well. We were fortunate to beat TCU at home by getting to them in the second half and they reversed roles. They picked it up in the second half and got to the free throw line like we did in Lubbock.”

Arms led the team with four assists and five rebounds to go along with his 13th double-figure scoring performance of the season. Williams now has a team-best four games with 20 or more points this season and has scored 2,030 points in his career. Tech finished the game with a 40-30 scoring advantage in the paint to extend its season-long streak of outscoring opponents inside and were 5-for-15 on 3-pointers with Warren hitting two and getting one each from Williams, Arms and Terrence Shannon, Jr. who finished the game with six points. Kevin Obanor and Kevin McCullar both scored four points, while Marcus Santos-Silva had two points, two assists and two rebounds.

Mike Miles led TCU with 26 points after going 10-for-15 from the field with three 3-pointers, while Emanuel Miller had 11 points and Damion Baugh scored 10. TCU finished the game shooting 25-for-50 (50 percent) from the field and were 6-for-16 on 3-pointers. Baugh hit two 3s in the game while Francisco Farabello hit another for a 61-60 lead with 3:47 to play.

“They played with a little stronger will than we did down the stretch,” Adams said. “This is something we’ll look at and learn from.”

Tech owned a 41-33 lead at halftime with Williams leading they way with 11 points and Arms scoring seven. Williams scored the first seven points of the game for the Red Raiders, while Arms had the final five with a 3-pointer and then a fastbreak dunk. Tech finished the first 20 minutes of the game shooting 63.0 percent from the field, including going 4-for-7 on 3-pointers. Williams was 5-for-5 from the field to begin the game. Warren added five points, while Shannon had six with Tech taking its 21st halftime lead. Miles was leading TCU with 14 points and three rebounds going into the break. Tech’s 41 points at halftime was the most since scoring 43 in the home win over Texas on Feb. 1 in Lubbock. It was only the third time Tech has scored over 40 in Big 12 play at the break this season.

TCU won the tip and would on its second possession to take a 2-0 lead after both teams missed shots on their first attempts… Williams tied the game at 2-2 with a left-handed hook shoot on Tech’s second possession
Williams scored Tech’s first seven points with a 3-pointer and jumper after his first basket that gave the Red Raiders a 7-4 lead… A TCU 3-pointer by Miles tied the game before Obanor hit a pair of free throws for a 9-7 lead
Tech was on a 6-0 run and led 13-7 (15:50) after a Warren fastbreak dunk that started with a Santos-Silva steal on the defensive end before Miles hit a shot for TCU
Warren banked in a 3-pointer to give Tech a 16-9 lead (13:04) and make the Red Raiders 2-for-3 on 3-pointers to start the game
TCU regained the lead at 19-18 on a Miles layup before Allen made a tough layup with 9:35 on the clock
McCullar and Obanor made back-to-back baskets to give Tech a 24-23 lead going into the under-8 media timeout… Tech was 10-for-16 (62.5 percent) from the field to start the game after their baskets
Tech took a 30-23 lead with an 10-0 run with Williams hitting a runner and then throwing down a fast break dunk followed by a McCullar steal and layup… Miles ended the run with a 3-pointer for TCU
Shannon scored six straight points with an and-one that was followed by a 3-pointer for a 36-29 lead with 3:18 to play until halftime… Tech was 3-for-6 on 3-pointers after his shot
Arms would connect for the fourth Tech 3-pointer and then threw down a dunk for a 41-33 lead… Arms had seven points after the pair of baskets to end the half

Williams scored the first basket of the second half to give Tech a 43-33 lead (18:28 ) and him 13 points… Warren hit a 3-pointer for the first 3-pointer of the half and a 46-35 lead
Arms would make Tech’s next points after a long drought, hitting a pair of free throws for a 48-39 lead with 13:32 remaining
Williams gave Tech a 50-44 lead with another left-handed layup (12:14)… It was the first basket for Tech since his early make in the half and gave him 15 points on 7-for-8 shooting
Arms went into double figures with 11 points on a layup off an assist from McCullar… It gave Tech a 54-46 lead with 10:54 to play
Warren went into double figures with 10 points after coming away with a steal and dunk… Tech led 56-50 going into a timeout with 9:05 on the clock and Williams, Arms and Warren in double-figure scoring
TCU took its first lead of the second half on a Farabello 3-pointer with 3:47 on the clock… Arms would respond on the other end with a dunk after getting a second-chance basket though to start a series of back-and-forth sequences
Tech took a 64-63 lead into the final media timeout (2:40) after a dunk by Williams that was assisted by Warren… Williams had 21 after the basket that gave the Red Raiders the lead back after TCU had led by one on a Miles layup with 2:56 on the clock
TCU led 65-64 after a pair of Miller free throws with 2:08 on the clock that was followed by a Warren layup for a 66-65 Tech lead