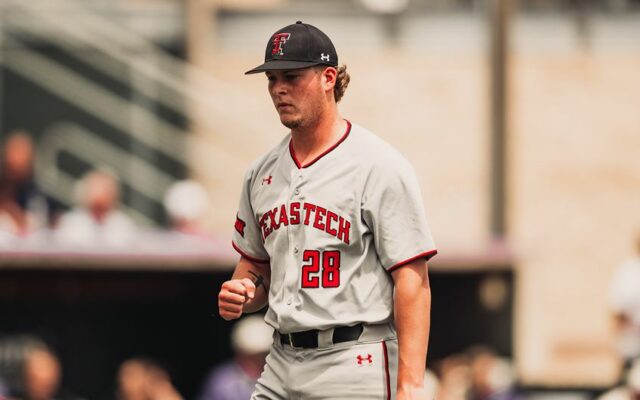 WACO, Texas – The No. 9 Texas Tech baseball team defeated Baylor, 7-1, on Friday night at Baylor Ballpark. The Red Raiders’ dominant effort was keyed by starter Andrew Morris’ seven innings of work on the mound and timely two-out hitting from the offense.

Morris improves to 6-0 in 2022. The transfer from Colorado Mesa allowed one run and four hits during his seven-inning outing. He struck out seven and did not issue a walk, marking his second performance of the season tossing at least seven strikeouts without surrendering a walk.

The only ding in an otherwise near-perfect outing for Morris was a third-inning hit-by-pitch that turned into Baylor’s only run by way of a triple during the very next at-bat. He struck out the next two batters to strand the runner at third base.

The Red Raiders never trailed in the game. Tech jumped out to a 5-0 lead after the top of the third – all five runs were manufactured with two outs. The dagger was Owen Washburn’s three-run home run (watch), which broke open the game in the third to push the Red Raiders’ lead to five.

Cole Stilwell opened the game 2-for-2 and represented Tech’s first two runs to cross home plate. Ty Coleman hit a two-out single up the middle (watch) in the first to plate Stilwell while Kurt Wilson hit a two-out double (watch) in the third to score Stilwell to put Tech on top 2-0. Washburn followed Wilson for his sixth home run of the season, scoring Jace Jung as well who reached on a walk earlier in the inning.

Tech added its sixth run in the sixth and its seventh run in the ninth, utilizing a pair of lead-off doubles each time. Wilson doubled to lead off the sixth and Hudson White brought him home (watch) with another double. In the ninth, Jung reached base for the fourth time but used his first base hit (watch) that scored Dillon Carter who led off with a double.

Mason Molina finished the game for Tech. He tossed two innings of scoreless work out of the bullpen to secure the win. Molina faced one batter above the minimum as he issued one walk.

Wilson finished 3-for-3 to lead the Red Raiders in hitting. It was his fifth three-plus hit game of the season. Jung was 1-for-2 while walking three times. He entered the game leading the nation with 47 walks and exited with 50.

Up Next
The series with Baylor resumes on Saturday at 3 p.m. Tech would be winners of five of their first six Big 12 series this season with a second win in Waco. The series finale is Sunday at 1 p.m.