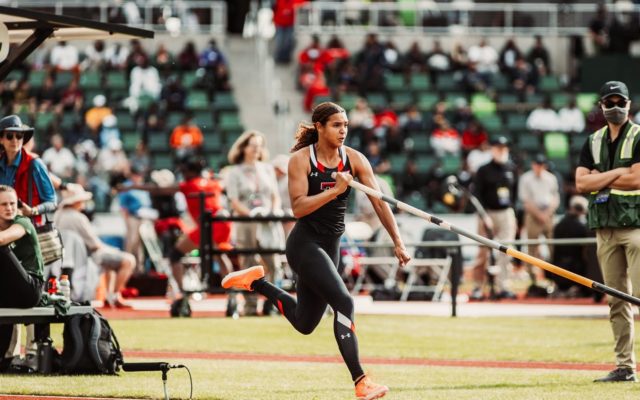 Pushing the pole for the final time in her collegiate career, Chinne Okoronkwo became a First Team All-American. Okoronkwo, a First Teamer indoors in 2019 and Second Teamer outdoors that year, earned First Team honors outdoors for the first time in her career. She did so with a season-best clearance of 14’-1.25” (4.30m). Okoronkwo is the second Red Raider in history to finish top-eight at outdoor nationals since Shade Weygandt, who did so in 2010.

“I am really proud of Chinne’s performance today,” said coach Tom Slagle, whose now coached two women to First Team status outdoors. “She jumped a season best in tough conditions. She is always a gamer and brings her best effort to the big meets. I was proud of what she was able to accomplish in the last meet of her collegiate career.”

Ruth Usoro finished eighth in the long jump, marking her first time competing at a national meet outdoors at the Division I level. Usoro marked 20’-10.5” (6.36m). The mark came on her third jump and was what got her into the top-nine to make finals. Monae’ Nichols earned Second Team All-America honors in the event, finishing 13th with her top jump of 20’-7.25” (6.28m). It is the third time in school history Tech has had two All-Americans at the outdoor title meet.

The 4×100 relay finished its season with what came out to be the fastest time run by a Red Raider relay in nearly a decade. The foursome of Virginia Kerley, Kiah Dubarry-Gay, D’Jenne Egharevba and Peyton Ricks timed 43.91, making them the first school relay to dip below 44 seconds since 2012. The time was this group’s second program top-10 time this season – the other coming at the NCAA West Preliminaries in 44.01 – and third by a Tech sprint relay this season. The 43.91 will go down as the third-fastest in school history.

The 4×400 relay timed 3:37.10 to wrap their season. The veteran group was led off by Jadsia Warden, who handed off to Sara Limp. Limp went to Lexye Price, who typically serves as the anchor, while Amanda Crawford held fourth leg duties this meet. They are the eighth mile relay to run at nationals, all of which have done so under Kittley.