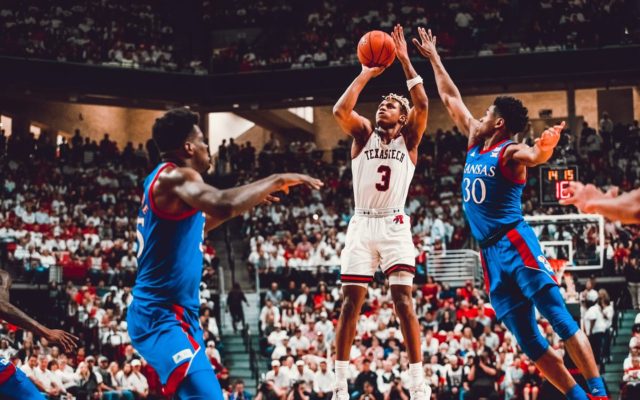 LUBBOCK, Texas – Texas Tech’s Jahmi’us Ramsey was selected by the Sacramento Kings with the 43rd pick of the 2020 NBA Draft on Wednesday night.

An Arlington, Texas native, Ramsey earned Big 12 Freshman of the Year, All-Big 12 Second Team, NABC All-District First Team, Big 12 All-Newcomer Team, Big 12 All-Freshman Team and was a three-time Big 12 Newcomer of the Week selection. Ramsey, who is the first Red Raider to earn Big 12 Freshman of the Year, finished the season fifth in the Big 12 in scoring and was second with a 42.6 percentage on 3-pointers and fifth with a 44.2 shooting percentage.

Ramsey’s selection in the NBA Draft gives the Red Raiders and head coach Chris Beard three straight years with a pick following Zhaire Smith (2018) and Jarrett Culver (2019). Tech has now had 25 players picked in the NBA Draft in its program history. Along with Ramsey, the Kings selected Iowa State’s Tyrese Haliburton with the 12th pick of the draft which also saw Kansas center Udoka Azubuike go to the Utah Jazz and TCU guard Desmond Bane selected by Memphis to give the Big 12 four picks in the 2020 NBA Draft.

An All-State selection and State Champion at Duncanville High School, Ramsey signed with the Red Raiders as the No. 31 ranked recruit in the nation by ESPN and was No. 5 in Texas by 247Sports. In this year’s draft, Ramsey was the only one-and-done from the Big 12.

An explosive and consistent guard for the Red Raiders throughout the 2019-20 season, Ramsey scored in double figures in 21 of 27 games played including scoring 20 or more in seven games. He recorded his career-high with 27 points against Long Island in non-conference play before dropping 26 at Kansas where he was 5-for-6 on 3-pointers at Allen Field House. Ramsey completed the season going 60-for-141 (42.6 percent) from beyond the arc and with four games with five 3-pointers and 10 games with three or more.

He is only the third freshman in Texas Tech history to lead the team in scoring for a season and also topped the Red Raiders with 1.3 steals per game. Ramsey had a career-high seven assists at Iowa State to go along with 25 points against the Cyclones and recorded five or more rebounds in 13 games. He had a career-high nine rebounds against Bethune-Cookman in the second game of his collegiate career and followed it by scoring 25 points against Houston Baptist. In his career-high scoring performance, Ramsey was 5-for-6 on 3-pointers and also had six rebounds against LIU. He finished the conference season averaging 14.5 points and 3.6 rebounds per Big 12 game.

Ramsey joins Culver and Smith who were selected in the NBA Draft as Red Raider underclassmen in the past three seasons under head coach Chris Beard. Smith entered the draft after his freshman season (2017-18) and was selected No. 16 followed by Culver who left Texas Tech following his sophomore season (2018-19). Culver was picked at No. 6 by Phoenix before a draft-night trade that sent him to Minnesota where he is averaging 9.2 points, 3.4 rebounds and 1.7 assists through 63 games. Texas Tech has had 24 players selected in the NBA Draft in program history, including first-round selections of Smith (16), Culver (6) and Tony Battie who was taken at No. 5 in the 1997 draft by Denver.

The first NBA Draft, held in 1947, saw Garland Head chosen in the third round after a Red Raider career where he was a three-time All-Border Conference selection for the Red Raiders. Smith, a freshman teammate with Culver on the Elite Eight team, was picked by the Phoenix Suns before being traded to the Philadelphia 76ers on draft night for the first Tech selection since Andre Emmett in 2004. This is the second time in program history that a Red Raider has gone in three straight drafts following Mark Davis (1995), Jason Sasser (1996) and Battie (1997).