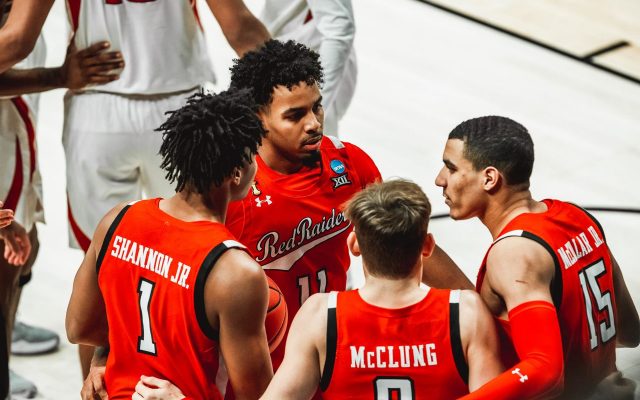 INDIANAPOLIS – No. 21 Texas Tech had its season end with a 68-66 loss to No. 10 Arkansas in the NCAA Tournament South Region Second Round on Sunday at the Hinkle Fieldhouse.

The Red Raiders (18-11) led by 10 in the first half but would trail by as many as 13 in the second half before going on an 11-0 run to get back into the game. The Razorbacks (24-6) took a two-point lead with 19 seconds remaining with a free throw before Kyler Edwards got to the basket but missed a layup in the final seconds to end the game. Arkansas advances to the Sweet 16 where it will play 15-seed Oral Roberts which earned an 81-78 win over Florida.

“First just want to congratulate Arkansas, Coach Muss and those guys, kind of a classic NCAA Tournament game,” Texas Tech coach Chris Beard said. “It could have gone either way. I was hoping it’s going to be one of those games that the team that had the ball last would win it. That’s kind of what it felt like. Our guys did a great job coming back in the game. We’ve done that before. There’s no quit in these guys.”

Terrence Shannon, Jr. led the Red Raiders with 20 points after going 3-for-4 on 3-pointers and 5-for-5 from the line, while Kevin McCullar had 15 points and eight rebounds. Edwards finished the game with 11 points by hitting three 3-pointers, grabbed eight rebounds and had five assists for the Red Raiders who were 10-for-20 from beyond the arc. Tech freshman Chibuzo Agbo scored a career-high six points with two 3-pointers to help get the Red Raiders back into the game, while Mac McClung finished with nine points and Marcus Santos-Silva had five rebounds and five points.

Down 56-46, Edwards hit back-to-back 3-pointers to begin the comeback before a McCullar jumper and Shannon 3-pointer had it at 56-54 with six minutes remaining. Agbo buried his first 3-pointer of the game and first since Feb. 6 at Kansas State to make it a one-point game before Arkansas pushed the lead back to eight. His second of the game cut the Razorback lead to 65-60 with 3:41 remaining and two free throws by Shannon had it at 67-66 with 1:56 remaining.

Tech’s 10 3-pointers were the most its had since 11 against Troy in the non-conference schedule and the second time this season in double-digit 3-pointers. Agbo was 2-for-4 from beyond the arc, while Edwards and Shannon had three each and McClung was 1-for-2. The Red Raiders finished the game shooting 36.1 percent from the field overall and were 12-for-18 at the free-throw line.

Justin Smith led Arkansas with 20 points in the game and Davonte Davis and Moses Moody scored 15 each. Jalen Tate added 10 to give the Razorbacks four double-figure scorers in a game where they shot 41.9 percent from the field but were only 4-for-17 on 3-pointers against the Tech defense. Arkansas was 12-for-17 at the free-throw line, including the final one by Notae with 19 seconds to play.

Both teams finished the game with only nine turnovers and Tech had a 38-36 rebounding advantage. The all-time series between the two programs is now 40-40. The Red Raiders fell just short of advancing to the program’s third straight Sweet 16 after making the 2018 Elite 8 and the 2019 National Finals. Of the 11 loses during the season, six came in one-possession or overtime games.

“I thought they had a lot of fight,” said Beard who is now 9-3 in the NCAA Tournament as Tech’s head coach. “We’ve been doing that all year. We call it play it to the bone. It’s a 40-minute game. We really competed down the stretch and gave ourselves a chance. Just proud of our players. It’s a hurt locker room right now. To me, this is one of the great things about athletics. You get to feel the highs of the high, and the lows hurt.

“But just the teamwork is — there’s a lot of tears in that locker room right now, and just shows that these guys are elite people. There will be some really good professional men coming out of that locker room, rich men, winners. These guys have passion for what they do. Tonight we didn’t play as well as we wanted to in segments of the game. But we played it to the bone. Another great Texas Tech effort out there, just a gutsy effort.”

Arkansas started the second half on an 11-4 run to take a 44-35 lead in the opening four minutes of the half… At the first media timeout the Red Raiders were just 1-for-4 from the field while the Razorbacks were 4-for-8.
Arkansas led 46-35 before a Shannon 3-pointer with 15 minutes to play in the game and to stop a 10-2 run… Santos-Silva had a put back to make it 48-40.
Edwards hit his second 3-pointer of the game to cut Arkansas’ lead to 56-46 with 8:12 to play.
McClung got the Red Raiders on the board for the first time in the game by hitting the second of two free throws on the team’s third possession before a McCullar jumper on the next trip down the court… Arkansas had started the game on a 5-0 run.
Edwards gave Tech a 6-5 lead with a 3-pointer off an assist from Peavy to take the lead into the first media timeout of the game… McCullar hit another Tech 3-pointer to give the Red Raiders an 18-11 lead with 12 minutes to play until halftime.
Tech had a 10-point lead with Shannon hitting a 3-pointer to make it 23-13 with 10:53 remaining in the half… It was Tech’s four 3-pointer but was followed by a 6-0 Arkansas run.
Arkansas tied the game at 27-all with a Davis jumper with 5:46 and led for the first time since early in the game with another Davis jumper with 3:49 on the clock for a 31-29 lead.

Tech trailed for the second straight NCAA Tournament game at 33-31 at halftime. Shannon led the Red Raiders with nine points on 4-for-8 shooting and one 3-pointer, while McClung and McCullar had seven points each. The Red Raiders, who had only two turnovers in the first half, were 4-for-10 on 3-pointer at the break with Edwards hitting the first. Edwards had five points and four rebounds at the break. McCullar led the team with five rebounds with the Red Raiders having a 20-18 rebounding advantage at the break. Smith led Arkansas with 10 points and four rebounds, while Davis had nine points. The Razorbacks shot 14-for-33 from the field (42.4 percent) but were only 2-for-10 on 3-pointers at halftime.