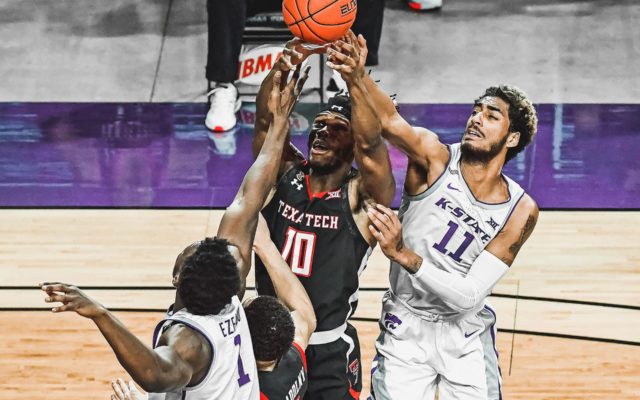 MANHATTAN, Kansas – Kyler Edwards had 13 points and eight rebounds and Mac McClung scored 23 to help lead No. 13 Texas Tech to a 73-62 win over Kansas State on Saturday at the Bramlage Coliseum.

The Red Raiders (14-5, 6-4 Big 12) improved to 4-1 on the road in conference play after hitting 10 3-pointers, committing only 10 turnovers and having 18 assists on 24 baskets against the Wildcats (5-15, 1-10 Big 12). The Red Raiders are on a three-game winning streak and will now return to action against No. 17 West Virginia at 8 p.m. on Tuesday at the United Supermarkets Arena. Tech will look to even the season series after falling 88-87 to the Mountaineers back on Jan. 25 in Morgantown, West Virginia.

“I’m disappointed in our execution and our ability to put good possessions back to back, but I was pleased with our poise,” Texas Tech coach Chris Beard said. “In certain parts of this game we had several opportunities to get ahead and maybe open the game up a little bit and then K-State would go on a run. Some of the inexperienced teams that might kind of affect but I thought we did a good job responding when they made their runs. So positive today, I thought we had a poise to us. Negatives today we’ve just got to play a lot better.”

Tech, which made its final seven shots of the game, has now won four in a row against Kansas State and improved to 8-2 against KSU under Beard. The Red Raiders also earned an 82-71 win over the Wildcats at home and have now swept the Big 12 series against KSU three times in the series history. On Saturday, it was a wire-to-wire win with Tech never trailing and leading by as many as 12.

McClung went over 20 points for the ninth time this season after going 8-for-17 from the field and 6-for-9 at the free-throw line, while Kevin McCullar added 15 points, six rebounds and four assists in the win. McCullar was 4-for-8 from the field and hit four free throws to fall one point shy of his career-high. Edwards and McCullar led the Red Raiders with three 3-pointers each as the team went 10-for-20 from beyond the arc. The 10 3-pointers were the most the Red Raiders have had in conference play and were one shy of matching the season-high (Troy).

Marcus Santos-Silva had a career-high five assists to lead the Red Raiders, while McClung and McCullar had four each. Santos-Silva also had six points and six rebounds to go along with his assists. Tyreek Smith matched a career-high with three blocks int eh game and also had five points, including hitting his second 3-pointer of his career. Jamarius Burton, Clarence Nadolny and Chibuzo Agbo each had three points.

Texas Tech led 30-25 at halftime led by McClung who had 13 points and with a five-point lead on a Nadolny jumper in the final seconds. Tech was 5-for-11 on 3-pointers in the half with McClung, Edwards, McCullar, Burton and Agbo having one each. KSU also had five 3-pointers. Smith had two blocks int eh half, while Edwards led the team with six rebounds to go along with three points.

McClung hit a jumper to give Tech an 11-8 lead with 12:16 remaining in the first half and give him eight points at the time… Burton followed with a 3-pointer of his own for a 14-11 lead going into the under-8 media timeout.

Edwards gave Tech a 26-22 lead with a 3-pointer (1:40) off an assist from McCullar.
Tech took a 35-32 lead at the first media timeout of the second half with Smith hitting a 3-pointer… It was only the second 3-pointer in his career and first since the Troy game which was the fourth game of the season… He added to the lead with a pair of free throws for a 40-33 lead (14:29).