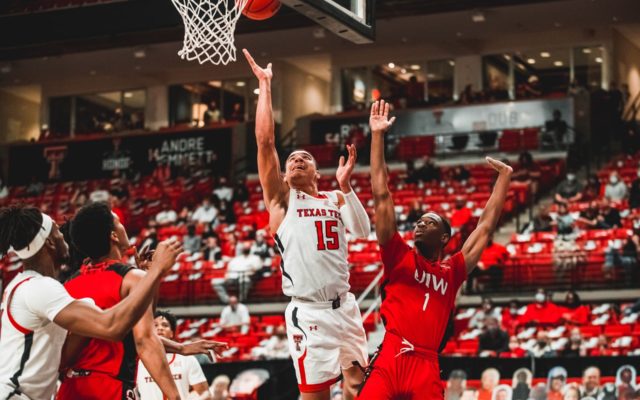 LUBBOCK, Texas – Texas Tech sophomore Kevin McCullar went for 11 points in his season debut and 12 Red Raiders scored in a 79-51 non-conference win over Incarnate Word on Tuesday at the United Supermarkets Arena.

The No. 13-ranked Red Raiders (8-2) led 41-19 at halftime and continued adding to their lead in the second half to improve to 6-1 at home this season. McCullar, who had missed the first nine game of the season with an injury he suffered in the preseason, came off the bench to shoot 5-for-9 from the field and also added three rebounds and two assists. Marcus Santos-Silva matched him for the team-high with 11 points, while Kyler Edwards went for 10 points and eight rebounds after securing nine rebounds at Oklahoma last Tuesday. The Red Raider defense, which is allowing just 53.7 points per game, has now held eight of 10 opponents under 60 points and seven under 40 percent shooting.

“I was really upset being hurt going into the season,” said McCullar, who averaged 6.0 points and 3.2 rebounds in 29 games as a freshman. “Everyone kept giving me positive messages though and I was just ready for the comeback. Adversity only makes you tougher. It was a game-time decision today with me seeing how I felt. I practiced with the team this morning and was ready to go. It just felt great to be back out there. The fans gave me big applause. I was just happy to be out there with my team and get that win.”

Mac McClung matched a career-high with seven rebounds and also added eight points and three assists in the game and Micah Peavy scored seven points. Tech finished the game with 17 assists on 29 baskets, led by Nimari Burnett who had a career-high four assists. Terrence Shannon, Jr. scored five points in the game after going for a season-high 21 last Tuesday in the road win at Oklahoma and Avery Benson came off the bench to hit two 3-pointers to finish with six points. McClung also had seven rebounds against Samford on Dec. 21, 2019 while playing for Georgetown.

Jamarius Burton made his second straight start and third of the season, finishing with four points while Vladislav Goldin finished with five points and Tyreek Smith added three. Smith and Edwards led Tech with two blocks in the game and Burnett had one.

Texas Tech is now 102-46 under head coach Chris Beard who improved to 69-10 at home, including a 41-1 home record in non-conference games. The Red Raiders never trailed in the game and led by as many as 30 in the second half before securing the 28-point victory.

“The way we approached the game tonight was that it was the most important game we’ve ever played or coached,” Beard said. “This was the next game on the schedule. If you feel any different, you don’t know how to compete. We had one focus the last couple of days and that was to beat Incarnate Word. We weren’t thinking of what’s next.”

What’s next now is Oklahoma State at 3 p.m. on Saturday at the USA in the return to Big 12 play. The Red Raiders are currently 1-1 in conference play with a one-point loss to No. 3 Kansas and a road win over Oklahoma.

Texas Tech scored first on its second possession of the game with Santos-Silva grabbling an offensive rebound and getting the second-chance points for a 2-0 lead… The Red Raiders started the game on a 5-0 run with Shannon converting an and-one on the next possession before UIW scored its first basket.
McCullar entered for the first time this season at the 13:55 mark of the first half… He would score his first basket at 11:15 with a layup and then a free throw to convert the and-one to give Tech an 18-6 lead… It was Tech’s first double-digit lead of the game.
Tech took a commanding lead when it went on a 13-0 run to take a 23-6 lead capped with a Burton jumper with 7:36 to play in the opening half… UIW stopped the run with a pair of free throws before Edwards responded with a 3-pointer to take a 26-8 lead. It was Tech’s first 3-pointer of the half where it was shooting 0-for-5 before Edwards connected.
A Chibuzo Agbo 3-pointer gave the Red Raiders their first lead over 20 points with 1:14 remaining until halftime… The largest lead of the first half was the 22-point halftime advantage with a Tyreek Smith dunk.
Santos-Silva hit a pair of free throws to give the Red Raiders a 55-25 lead with 13:30 to play… The 30-point advantage was the largest of the game for the team.
UIW cut it to a 21-point deficit before Benson hit back-to-back 3-pointers to give the Red Raiders a 76-49 lead with under two minutes to play. The lead was back to 30 on an and-one by Vladislav Goldin with 30 seconds on the clock.

Texas Tech took a 22-point halftime advantage with the score at 41-19 after shooting 45.9 percent and limiting the Cardinals to only 23.8 percent, including going 0-for-6 on 3-pointers. UIW came into the game 12th nationally by shooting 41.8 percent on 3-pointers. McCullar led the Red Raiders with nine points on 4-for-6 shooting in the first half, while Santos-Silva had seven and Shannon scored five. McClung was leading the team with seven rebounds to go along with three assists and two steals, while Edwards had four rebounds and three points. Tech, which held an opponent under 20 at halftime for the fourth time this season, finished the first half 5-for-8 at the free-throw line and 2-for-9 on 3-pointers.

UIW was 9-for-11 from the free-throw line at the half and was being out-rebounded by a 22-14 margin. Tech had 11 offensive rebounds in the opening half and also had forced 12 turnovers while having only five of its own. The Red Raiders have now led at halftime in eight of 10 games this season.