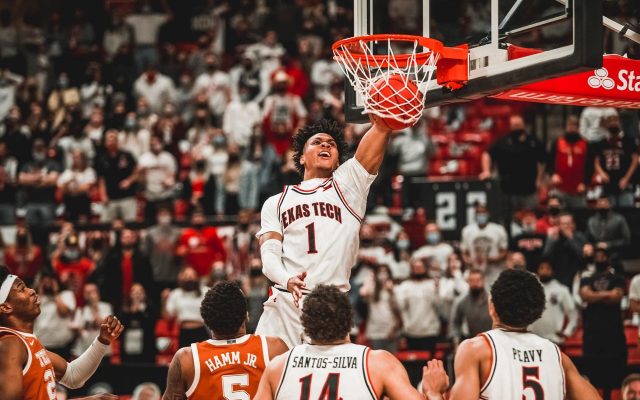 LUBBOCK, Texas – Marcus Santos-Silva had 10 points and nine rebounds to help lead No. 18 Texas Tech to a 68-59 win over No. 14 Texas on Saturday in a game where five Red Raiders scored in double figures at the United Supermarkets Arena.

“It was big,” Santos-Silva said. “We were on a three-game losing streak, so it was big just having our backs against the wall and because we were able to get back to having fun right there. We missed those moments.”

Tech (15-8, 7-7 Big 12) held the Longhorns (14-7, 8-6 Big 12) to only 5-for-25 shooting in the second half to secure the season sweep after also earning a 79-77 win in Austin. TTU is now 7-1 against UT in the last eight matchups and 8-4 under head coach Chris Beard. Mac McClung led the Red Raiders with 16 points, including 11 in the second half while Terrence Shannon, Jr. scored 11 and Kyler Edwards and Kevin McCullar joined Santos-Silva with 10 points.

“I thought today was a good game,” said Beard who improved his home record to 72-13. “Two teams that are trying really hard. Felt like last day of February type game. From our perspective, for the first time in a while we felt like we played stretches of Texas Tech basketball. We get the five guys in double figures scoring balance offensively. We had another low turnover game today, had a couple bad timing turnovers, but for the most part our guys took care of the basketball. Then, our defense showed up in the second half when we needed it the most.”

Tied at 33 at halftime, the Red Raiders were 11-for-25 from the field in the second half and finished the game shooting 44.0 percent while UT was at 34.7 percent including just 29.2 percent (7-for-24) on 3-pointers. Tech snapped a three-game losing streak with the win and will now host TCU on Tuesday and Iowa State on Thursday before playing at No. 2 Baylor next Sunday in the regular-season finale.

McClung, who scored 22 in the win over the Longhorns in Austin, finished the game with two 3-pointers with his first giving the team a 25-24 advantage which was the first TTU lead of the game. McCullar finished with four steals for the second straight game and also added five rebounds and three assists. Micah Peavy and Edwards led Tech with four assists each to go along with McCullar’s three in a game where the Red Raiders had 13 assists on 22 baskets. Santos-Silva was one rebound shy of his third double-double of the season and also had one block.

“Our focus was just competing,” Santos-Silva said. “Making sure they didn’t get easy stuff on transition and then they get easy stuff on transition. Then just boxing at the other end because we know people say the whole time that they are more athletic than us, but all we got to do is show heart and be tough. We compete and we can get these boards and just make sure our guys don’t get. That’s what I feel like was that was my focus.”

Tech led by as many as 13 points after going on a 6-0 run that started with a dunk by Shannon and was capped by a second-chance basket from Santos-Silva. The 50-39 lead came with 11:29 remaining in the game before Texas starting chipping in and had it at 57-51 before another Santos-Silva second-chance layup pushed the lead back to eight with five minutes on the clock. The Longhorns pulled to within three on an Andrew Jones 3-pointer with three minutes remaining, but the Red Raiders stayed strong and wouldn’t let it get any closer. Chibuzo Agbo, who finished with four points, stepped to the line with 47 seconds remaining to hit a pair of free throws that gave Tech a 65-59 lead before McClung made two more to cap the win.

Jericho Sims led Texas with 11 points and seven rebounds, while Matt Coleman III had 10 points. The Longhorns finished the game 17-for-49 from the field and also had 12 turnovers. Tech had only 11 turnovers and also had a 4-2 advantage in blocks against Texas.

“Guys have been trying really hard all season, defense is still a work in progress,” Beard said. “We see that type of defense in practice, we see that defense in segments of games, but I thought today we sustained for the most part. Texas threw one more run at us, we were able to sustain it. We don’t really have a plan to stop Texas with that kind of talent, that kind of spacing, we just want to be the more aggressive team. To sit back and hope they miss is not going to work, so today we got to handle the ball, triple team in the post. Some of our mistakes were over help, over being aggressive, we much rather be over aggressive than not aggressive enough, especially versus a team as talented as that team today.”

Tech started the second half on a 4-0 run with baskets from Santos-Silva and Peavy to take a 37-33 lead… The Red Raiders would led by 13 after a 6-0 run with baskets from Shannon, McClung and Santos-Silva.
Cut to six, Tech took its lead back to 59-51 on a second-chance layup from Santos-Silva following a Kai Jones dunk.
UT’s Andrew Jones hit a 3-pointer to make it 59-56 but Tech responded with McClung and Edwards hitting free throws… Peavy would make another one with 59 seconds remaining for a 63-58 lead and was followed by Agbo who drilled two for a 65-59 lead with 47 seconds to play.
Edwards hit a 3-pointer for Tech’s first basket… The 3-pointer came on the fourth possession of the game and stopped a 4-0 run by the Longhorns to start the game.
McCullar hit a pair of free throws to cut TTU’s deficit to 10-9 with 13:12 on the clock… Texas went on a 4-0 run before Santos-Silva made a layup to make it 14-11 (11:57).
McClung drilled a 3-pointer to give Tech its first lead at 25-24 with 4:43 remaining in the half… The Red Raiders led 31-28 after a Peavy shot before McCullar made it 33-30 with a jumper with 20 seconds on the clock. Coleman hit a 3-pointer in the final second for Texas to tie the game going into the break.