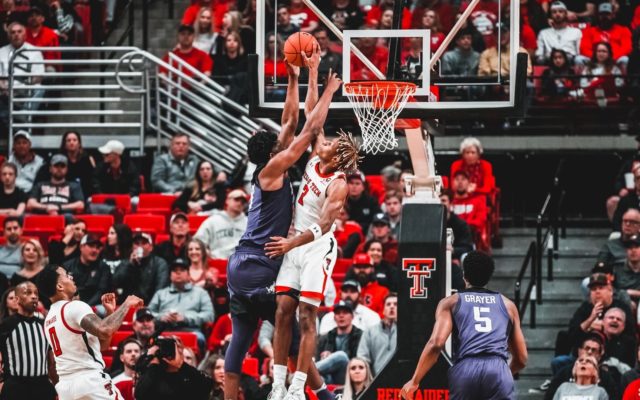 The Red Raiders (16-8, 7-4 Big 12) extended a three-game winning streak and earned their largest win in Big 12 history with an 88-42 victory over the Horned Frogs (13-11, 4-7 Big 12) on Monday at the United Supermarkets Arena. Jahmi’us Ramsey and Davide Moretti led Tech with 17 points each, while Kyler Edwards added 14 in a game where 10 Red Raiders scored.

Tech, which returned to the Associated Press Top 25 on Monday afternoon after a two-week absence, finished the game with a season-high 13 3-pointers, shot a season-high 60.4 percent from the field and limited TCU to only 26.7 percent shooting along with committing 20 turnovers. The Red Raiders had a season-low six turnovers and five players in double-figure scoring to help avenge a 65-54 loss to the Horned Frogs on Jan. 21 to even the season series. Tech leads the Big 12 by shooting 35.6 percent on 3-pointers, improved to 12-2 at home this season and is now 62-7 at home under head coach Chris Beard.

“We always look at the defense first,” Beard said. “To hold a good team, that’s well coached, to a low percentage in the field, you have to give our guys credit. On offense, it’s always nice to have balance and have guys in double figures and sharing the ball. That’s always our idea of how to win around here.”

Moretti and Edwards both finished the game going 4-for-6 on 3-pointers, while Ramsey and Andrei Savrasov both hit two for the Red Raiders who were 13-for-22 (59.1 percent) from beyond the arc. Up 45-20 at halftime after making nine 3-pointers in the opening 20 minutes, Tech would go on to earn the 46-point victory that broke its previous Big 12 record of a 35-point margin established earlier this season with an 85-50 win over Oklahoma State. The win was the largest margin overall since a 50-point win over Incarnate Word to begin last season.

Ramsey finished the game shooting 7-for-11 from the field for his 17 points, while Edwards added 14 points, four assists and four rebounds. Chris Clarke led the team with five assists, while TJ Holyfield scored 10 points and had three blocked shots. Holyfield now has 19 blocked shots in the past five games for the Red Raiders who had seven blocks against the Horned Frogs after having a season-high nine last Saturday at Texas. A freshman from Arlington, Ramsey is third in the Big 12 in scoring at 15.9 points per game and leads the conference by shooting 45.2 percent on 3-pointers after going 2-for-3 from beyond the arc on Monday night.

Kevin McCullar matched his season-high with 10 points, while Savrasov and Russel Tchewa both scored six points off the bench. The Tech bench scored 27 points in the game where the Red Raiders owned a 33-4 advantage on scoring off turnovers. Moretti matched his season high with four 3-pointers and now has 152 in his career which puts him ninth all-time in program history after passing Jerry Mason who had 151 from 1987-90 for the Red Raiders. Edwards had five 3-pointers against Iowa State earlier this season for his career-high and has now made 67 in his career.

Desmond Bane, who scored 27 on Tech in the first meeting, was held to only seven points on 3-for-9 shooting with Jaire Grayer leading TCU with 10 points off the bench. The Horned Frogs were limited to only 3-for-19 shooting on 3-pointers and scored 15 of their 42 points from the free-throw line.

Texas Tech took a commanding 45-20 lead into halftime after making nine 3-pointers and shooting 61.5 percent from the field. Moretti led the Red Raiders with 13 points after going 4-for-5 on 3-pointers, while Edwards had 11 points with three 3-pointers and Holyfield was at 10 points by going 4-for-5 from the field. Tech started the game on an 11-2 run with Moretti hitting a 3-pointer on the first possession and Edwards hitting his first 3 to give the Red Raiders a 9-2 advantage before a Shannon dunk. Tech stacked a couple early runs together, including going on an 8-2 run that included a Holyfield 3-pointer after a blocked shot on defense and then a layup from him to extend the lead to 19-4. The Red Raiders led 34-13 on another Edwards 3-pointer and were up 40-13 on a McCullar basket. Holyfield ended the half scoring the final three points with a dunk and a free throw. TCU was limited to just 30.8 percent shooting and was 2-for-11 on 3-pointers. Bane was at five points at the break.

Already up 25 at halftime, the Red Raiders continued building their lead that grew to 35 with a 7-0 run that included four points from Clarke and an Edwards 3-pointer and led by 43 with an 8-0 run that started on a Tchewa jumper followed by six straight from McCullar.

“It’s certainly an easier game to play when shots are going in, but tonight we got a lot of open shots which I think is a credit to our passing,” Beard said. “Guys made a lot of unselfish plays all the way down to the end. I also thought those guys that came in and finished the game played great. It’s not easy when you haven’t played and you come in towards the end of the game.”

Texas Tech, which is 4-1 in the past five games, will return to action at 12 p.m. on Saturday against Oklahoma State in Stillwater, Oklahoma.