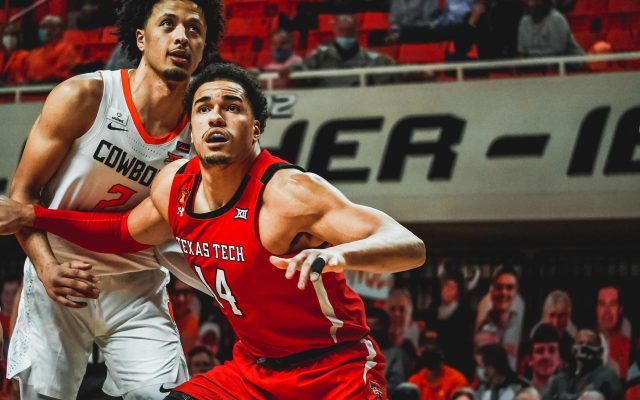 STILLWATER, Oklahoma – Texas Tech forced overtime but for the second time this season fell to Oklahoma State in an extra session with a 74-69 loss on Monday at the Gallagher-Iba Arena.

OSU scored seven of its nine overtime points at the line where it was 7-for-8 at the free-throw line. Tech went 2-for-10 from the field in the extra five minutes and did not attempt a free throw.

Texas Tech will return to action against No. 14 Texas at 11 a.m. on Saturday at the United Supermarkets Arena. The Red Raiders are now 0-2 in overtime this season and fell to 5-3 on the road with the loss.

Cade Cunningham led OSU with 20 points and five rebounds, while Kalib Boone had 18 and Avery Anderson scored 16. The Cowboys finished with a 37-32 rebounding advantage in a game where both teams finished with four blocks. Tech was called for 23 fouls, while OSU committed only 13.

“The first thing about learning is that you have to hold yourself accountable. You have to embrace the truth. You can’t be living in a world of excuses. To be really clear here, you guys asked me a couple questions about the free throw discrepancy, a tough technical foul and the officiating, but that’s not the reason we lost in overtime tonight to the future No. 1 pick and Oklahoma State. That’s not what happened. It’s a game of mistakes. Victory is going to favor the team that is more aggressive. Tonight both teams were aggressive. You can’t say Oklahoma State played harder than Texas Tech. When both teams are playing aggressive, it becomes a game of the fewest mistakes. We made some late. We have to figure out a way to get to the free-throw line and we can’t turn the ball over. We can’t get technical fouls. There’s things you have to do. Tonight we played aggressive and hard enough to win, but we have to play better.”

Tech forced overtime (65-65) with Shannon corralling a loose ball and finding Edwards for a layup with two seconds remaining… OSU was unable to score off an in-bounds play.
OSU started overtime on a 3-0 run with three straight free throws before Boone missed the fourth… Shannon got the Red Raiders on the board in OT with a runner just outside the lane.
McClung hit a layup to make it 70-69 with 29 seconds remaining in overtime… OSU hit two free throws to go up by three with 14 seconds to play before Tech missed a pair of 3-point opportunities to tie the game.
Tech expanded a one-point halftime lead to 47-36 with a 10-0 run to start the second half that included a layup from McClung, two free throws by Shannon, a put back from Santos-Silva, jumper from McClung and hook shot from Santos-Silva… OSU started the second half 0-for-9 before a 3-pointer to make it 47-39 (12:51).
OSU responded with a 15-0 run to take a 51-47 lead (2H, 9:47)… Benson ended the run with a 3-pointer in the corner off an assist from McClung.
Shannon hit a pair of free throws to make it 56-54 (6:08)… He had 16 points at that point in the game. McCullar would tie the game at 56-56 with a layup (4:49) before a McClung 3-pointer gave Tech a 59-56 lead (4:36).
3:53 was on the clock. Game was tied 59-all at the final media timeout.
McClung hit a jumper with 1:44 remaining to stop a 5-0 run by OSU before hitting another shot to tie the game with a minute remaining.
Tech opened the game by forcing an OSU turnover then scored on its first possession with a hook shot from Santos-Silva off an assist from McCullar… The game was tied at 6-6 at the first media timeout (15:03) with Peavy and McCullar adding to the total with baskets of their own before Shannon hit one of two free throws coming out of the timeout to give Tech a two-point advantage.
Tech took a 17-12 lead (1H, 12:01) after four straight points from McClung were followed by shots from McCullar and Santos-Silva… The Red Raiders were shooting 7-for-14 from the field at the second media timeout (1H, 10:27) with OSU taking an 18-17 lead with a pair of free throws coming out of the timeout.
Tech took a 25-22 lead on a Shannon jumper with 7:34 remaining until the half… It was his first basket of the game with the Red Raiders shooting 10-for-20 at that point in the game.
Shannon and McCullar hit back-to-back shots in the final 90 seconds of the first half to give Tech the one-point lead at the break.. Shannon and McCullar both had 10 points at halftime.

Texas Tech took a 37-36 lead into halftime with McCullar and Shannon both at 10 points and the team shooting 15-for-31 (48.4 percent) from the field. McClung, Micah Peavy and Santos-Silva each had four points at the break with Nadolny leading the team with three assists in a first half where Tech had eight assists on its 15 shots. Cunningham led OSU with 13 points at the half by shooting 5-for-9 from the field and also had five rebounds, while Kalib Boone had 11 points on 4-for-6 shooting. OSU was shooting 53.6 percent at halftime by making 15 of 28 shots but were only 1-for-5 on 3-pointers. Tech was 3-for-7 on 3-pointers with Edwards, Shannon and McCullar connecting from beyond the arc. It was Tech’s 13th halftime lead of the season.