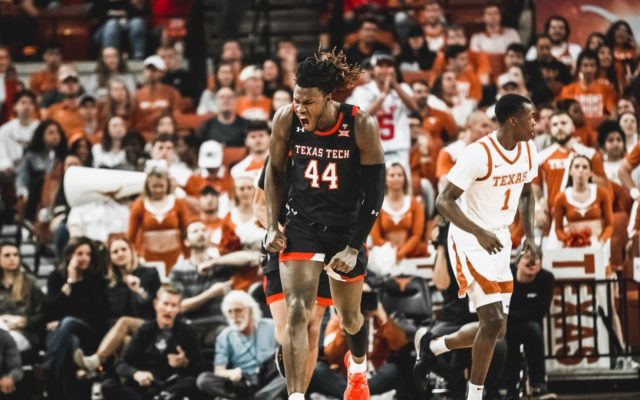 AUSTIN, Texas – Texas Tech fought back from a 16-point deficit to earn a 62-57 win over Texas with Jahmi’us Ramsey leading the team with 18 points and TJ Holyfield rejecting five shots and securing eight rebounds on Saturday at the Frank Erwin Center.

The Red Raiders (15-8, 6-4 Big 12) trailed 31-19 at halftime, but stormed back to cut it to seven at 37-30 on a Davide Moretti 3-pointer and then tied it for the first time at 41 on a Kyler Edwards basket. Tech took its first lead of the game at 50-48 when Ramsey hit a 3-pointer to cap a 6-0 run. Texas (14-9, 4-6 Big 12) took a 57-56 lead on a Courtney Ramey 3-pointer before Edwards gave the Red Raiders a 58-57 lead on a layup. Moretti buried four straight free throws down the stretch to seal the win which was Tech’s largest comeback this season. Tech outscored the Longhorns 43-26 in the second half by limiting their turnovers to only two, having a season-high nine blocked shots and shooting 54.5 percent from the field.

“We were really fortunate to be just down what we were at the half,” Texas Tech coach Chris Beard said. “It felt like 20. We did a good job chipping it down there at the end of the first half. The emphasis was to take care of the ball and take good shots. We couldn’t keep just giving it away to them. We wanted to become the more aggressive team again. I think we were able to do that.”

Ramsey scored 14 of his 18 points in the second half after going 4-for-5 from the field and 2-for-2 on 3-pointers after halftime, while Terrence Shannon, Jr. finished with 13 points and Edwards scored 10. The Red Raiders finished the game shooting 46.7 percent, including going 12-for-22 in the second half with three 3-pointers after not making one in the first half. Holyfield, who established a new season-high with five blocked shots was limited to two points but led the team with his eight rebounds.

Moretti finished the game with seven points after going 4-for-4 at the free-throw line, while Chris Clarke had eight points, four assists and four rebounds. Kevin McCullar added four points off the bench. Andrew Jones led Texas with 18 points after hitting three 3-pointers, while Matt Coleman III had 17 points and seven rebounds. The Longhorns finished the game shooting 6-for-23 on 3-pointers and 35.5 percent from the field.

Texas led 31-19 at halftime after forcing 11 turnovers by the Red Raiders who also shot just 39.1 percent from the field and were 0-for-5 on 3-pointers. The 19 points were one more than the halftime-low for the season against Baylor and was the 11th time this season they trailed at the break. Shannon led the Red Raiders with nine points at halftime after going 4-for-5 from the field and also had five rebounds, while Ramsey and Clarke had four points each. Texas, which made four 3-pointers in the first half, built its lead with a 14-0 run to take a 22-8 lead before the Red Raiders started to fight back. Down 27-11, the Red Raiders went on an 8-0 run that was started with two baskets from Shannon and then one each from Clarke and McCullar to cut it to 27-11. Texas responded though with the final two baskets of the half to take the 12-point lead into the break.

The 12-point halftime comeback was the biggest since coming back from 12 against Oklahoma State on Jan. 23, 2018. The largest halftime comeback for the program (recorded since 1991-92 season) is 17 against Nevada on Dec. 27, 1997 in an overtime victory.

“There wasn’t a lot of panic from our bench, just disappointment that we weren’t playing well,” Beard said. “We have a lot of core values in our program and one of them is to ‘play it to the bone’. Sometimes when you get down like that you just have to have the mindset that it’s not over and start chipping away. We made the plays down the stretch that it takes to win a Big 12 game on the road.”