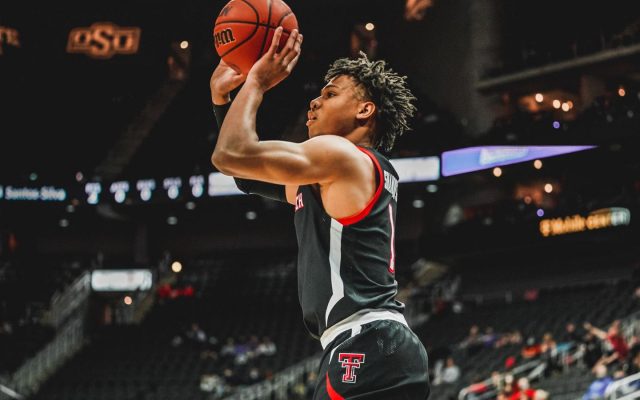 KANSAS CITY, Mo. — No. 20 Texas Tech was eliminated from the Big 12 Championship with a 67-66 quarterfinal loss to No. 13 Texas on Thursday at the T-Mobile Center.

The Red Raiders (17-10) will now wait until NCAA Selection Sunday to see who it will play next after dropping the game against the Longhorns where they were just 12-for-20 from the free-throw line. TTU had swept the regular-season series against UT before falling in the conference tournament with Matt Coleman making the go-ahead free throws with 1.8 seconds left.

“I really thought the tougher team was going to win tonight, and I thought Texas was the tougher team in the parts of the game that mattered most,” Texas Tech coach Chris Beard said. “I think Texas Tech was the tougher team during spurts of the game, but when it gets down to the last four or five minutes, classic March, Texas Tech-Texas game. We’ve been in three battles with these guys. We won two. They won one, this year, and this one stings because it’s in the postseason. Another thing is just undeniable and that’s free-throw shooting. You’re not going to make every free throw, but if you want to have success in March Madness, you’ve got to make a certain percentage, and then your best players have to step up there and make free throws.”

Terrence Shannon, Jr. led the Red Raiders with 18 points by hitting four 3-pointers, while Kevin McCullar scored 11 and had a career-high six steals. Marcus Santos-Silva led the team with nine rebounds and added 10 points and four assists. Mac McClung and Kyler Edwards had seven points each and Micah Peavy contributed six points and four assists. Tech finished the game 6-for-17 on 3-pointers while the Longhorns hit 11 3-pointers. UT was 6-for-8 at the line with Coleman hitting the final two for the win. Tech finished the game shooting 40.0 percent and had 13 turnovers, while UT shot 45.5 percent and overcame a 20-turnover game to advance.

Tech finished the game with 13 steals, led by the six from McCullar and two each from Shannon, Edwards and Peavy. McCullar came into the game with four steals in five games.

Jase Febres finished with 15 points, Andrew Jones added 11, and Jericho Sims and Kai Jones had 10 apiece for the Longhorns (18-7), who advanced to play No. 11 Kansas — the tournament’s second seed — in the semifinals Friday night.

The sixth-seeded Red Raiders led 66-61 before baskets by Kai Jones and Coleman got third-seeded Texas within a point with less than a minute to go. Texas Tech had a chance to push the lead back out, but Terrence Shannon Jr. was stripped on his drive to the basket by Brock Cunningham, giving the Longhorns a chance for the winning basket.

Andrew Jones missed the first try on a drive to the rim, and the loose ball on the rebound went to Coleman, who passed right back to Jones for a 3-pointer that bounced off the iron and out of bounds with 16.3 seconds left. Coleman would draw a foul and knock down both free throws.

“From where I was sitting, it looks like we missed a bunch of lay-ups, just shots right around the basket,” Beard said. “That’s basketball. You know, you’re going to have some misfortune, but then you’ve got to go make your breaks on the other end. You’ve got to make a break by getting an offensive rebound put-back. Somebody has just got to step up and will the ball in the basket. I obviously have not watched the film yet, but I’m pretty sure that in the last four minutes of the game we got about four or five point-blank looks around the basket and we just couldn’t get it to go in.”

Tech took a 66-61 lead into the final media timeout after a layup from McCullar and jumper from Peavy.
McCullar hit two straight baskets coming out of halftime followed by a Shannon 3-pointer to give Tech a 37-34 lead… Down four at halftime, Tech took a 38-34 lead with an 8-0 run to start the half before UT scored.
Tech took a 46-38 lead after back-to-back baskets from McClung… The two shots were McClung’s first of the game (2H, 13:18).
The Red Raiders were up by 10 for the second time in the game and first in the second half with a 6-0 run that made it 48-38 with 12 minutes to play…. The basket that gave them a 10-point lead started with a McCullar steal and led to a Shannon dunk.
Texas went on a 7-0 run to close to within one before a pair of Shannon free throws made it 51-48 with 9:07 to play.
Santos-Silva scored on the game’s first possession on a layup off an assist from Shannon after winning the tip… Shannon would hit a 3-pointer two possessions later to give Tech a 5-2 lead.
Edwards hit a layup and then a free throw for a 10-4 lead before a Nadolny 3-pointer gave Tech a 12-7 advantage going into the first media timeout.
Shannon hit his second 3-pointer of the half to give Tech a 15-7 lead (14:35) before Santos-Silva hit a second-chance layup for a 17-7 lead… The 10-point lead came on an 8-0 run before a Febres 3-pointer for Texas ended the run.
Shannon gave Tech a 28-22 lead with his third 3-pointer of the half after UT had closed it to 21-18… The Red Raiders went into the final media timeout of the first half leading 30-22 after a Smith layup off a Nadolny assist to extend a 7-0 run.
Texas took its first lead with a 10-0 run that took it to 32-30 on a Febres 3-pointer with 1:07 remaining in the first half… The Longhorns closed out to the half on a 12-0 run to take a four-point lead into the break.

Texas Tech lead by as many as 10 in the first half but would trail 34-30 at halftime with the Longhorns going on a 12-0 run to close out the half. Shannon led the Red Raiders with 11 points after going 3-for-4 on 3-pointers, while Santos-Silva had eight points and led the team with five rebounds. McCullar had four points and three rebounds and Edwards added four rebounds. Tech was 4-for-10 on 3-pointers in the first half, but also had eight turnovers. Coleman led Texas with 10 points after hitting three first-half 3-pointers for the Longhorns who were 6-for-14 on 3-pointers in the half. Tech led 17-7 with 13:41 on the first-half clock for its largest lead of the half.

Texas Tech had no trouble getting to the foul line; once the Red Raiders were there was another story. They were just 12 of 20 on free throws, missing a series of them midway through the second half and allowing Texas to mount a comeback. Texas was 11 of 26 from beyond the arc, turning almost exclusively to their backcourt with star freshman Greg Jones limited to just two points in 13 minutes because of foul trouble.