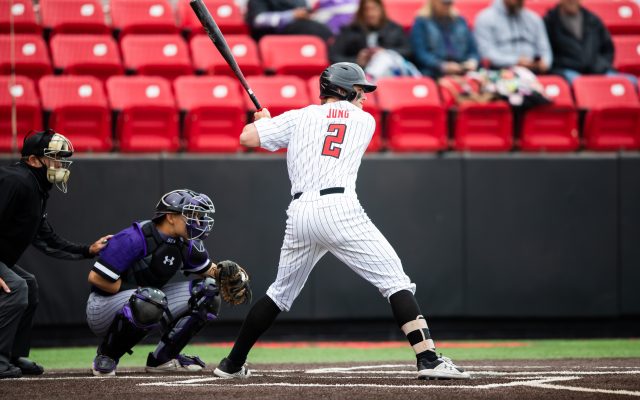 Jung and Baker are among 45 players on the Golden Spikes Award midseason watch, which honors the top amateur baseball player in the country. Tech is one of four schools nationally with multiple players on the list, which was unveiled on Wednesday by USA Baseball.

Cal Conley, meanwhile, is one of 100 players on the initial watch list for the Brooks Wallace Award, which honors the nation’s top shortstop and is named after former Texas Tech shortstop Brooks Wallace.

Jung entered the week tied for the national lead in home runs, RBI and total bases after blasting four home runs over the weekend in Tech’s series win over No. 10 TCU. Jung is hitting .404 on the season with 15 dingers, 46 RBI.

Baker continues to rank among the top-15 nationally in batting and hits despite being sidelined for the last week. He leads the Red Raiders with a .427 average, 33 runs scored and is tied for the team lead with 11 stolen bases.

Conley joins Jung in forming one of the top middle infields in the nation, hitting .326 with a team-high nine doubles to go with five home runs. He has driven in 29 runs and scored 20 times himself. Conley and Jung have been key up the middle in helping the Red Raiders rank among the best in the nation in double plays turned.

Semifinalists for the 43rd Golden Spikes Award will be announced June 8. The Brooks Wallace Award will begin narrowing down its field next month.

The No. 8 Red Raiders have won four consecutive games after a midweek sweep of SFA and head to West Virginia this weekend for a three-game set at Monongalia County Ballpark.