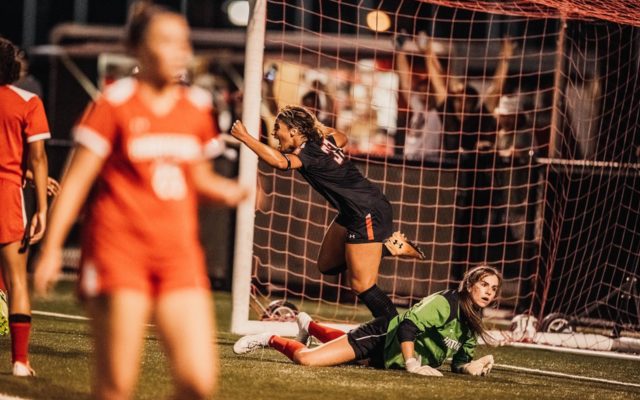 LUBBOCK, Texas – Texas Tech freshman Ashleigh Williams scored a 65th minute goal off an assist from Charlotte Teeter to help lead the Red Raiders to a 1-0 win over Hartford on Thursday at the Walker Soccer Complex.

The Red Raiders (2-0-1) earned their second straight 1-0 win at home after opening the season with a 1-0 victory over UTEP last Thursday before a 1-1 draw at UC San Diego on Sunday. Texas Tech was without Kirsten Davis and Eva Hurm who were both out with injury, but overcame the challenge with a complete team effort that limited the Hawks (2-1-0) to only one shot on goal.

A forward from Allen, Williams scored her first collegiate goal to break a scoreless game in the 65th minute. Williams led Tech with five shots, three being on goal. For the Texas Tech goal, Teeter headed the ball into the box and saw Williams fight to gain possession and get the team on the board.

“Honestly, after the ball was played in and the goalie kind of bobbled it, I was just on it,” Williams said. “I wanted that goal so bad.”

She set her mind to it and there's no stopping @Ashleighw_15! pic.twitter.com/Ugzjut5RjQ

Teeter, a senior from Alpharetta, Georgia, also had the assist of Macy Schultz’s goal on Sunday at UCSD and now has six assists in her career. Teeter added two shots on goal, while Schultz and Macy Blackburn had one shot on goal each.

Texas Tech finished the game with a 16-3 advantage in total shots and 7-1 in the shots on goal category. Madison White earned her second shutout of the season and the 11th of her career. White made one save in the game and now has 95 in her career.

The Red Raiders will return to action at 7 p.m. on Sunday against Abilene Christian who are 1-1 on the season. The Wildcats did not play this week after earning a 1-0 win over UTEP last Sunday in El Paso, while Tech will be coming off a solid win over Hartford where the team overcame injuries to key players and continued the early season development that Stone was looking for.

“We don’t want to be a work in stagnation,” Stone said. “We don’t want to work backwards. We are working towards getting ready for the Big 12 and having enough wins in our bag that when we get there that our season can be promising. We are building for the long term and won tonight while building. It gives us confidence going into Sunday. Our opponent didn’t play tonight and will be fresh. We’re fine with that. We’ll be ready. Let’s go.”

Our depth was tested today and we aced it 💯 pic.twitter.com/UvavUoeXxc