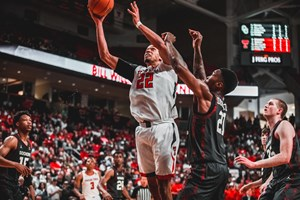 LUBBOCK, Texas – TJ Holyfield matched his season-high with 21 points and added six rebounds to help lead Texas Tech to a 69-61 win over Oklahoma on Tuesday in a game with 17 lead changes and 10 ties at the United Supermarkets Arena.

“It was just a great win for us,” said Texas Tech head coach Chris Beard who earned his 90th victory leading the program. “To finish the first half of Big 12 play against a team that I think is an NCAA tournament team with a Hall of Fame coach is great. Oklahoma is really difficult to play and coach against. I thought our guys stood the test. There are going to be a lot of ups and downs during the course of the game and I thought for the most part we kept our composure and kept fighting.”

Texas Tech will return to action this weekend when it plays at Texas on Saturday at 3 p.m. in the Frank Erwin Center. The Red Raiders and Sooners will meet up again in Oklahoma City on Tuesday, Feb. 25 at Chesapeake Energy Arena.

Holyfield, who was coming off a 19-point performance at Kansas and also had 21 points in the non-conference schedule against Houston Baptist, was 8-for-12 from the field and 2-for-2 on 3-pointers against the Sooners. He also had three offensive rebounds in the game and was 3-for-4 from the free-throw line. Edwards finished the game with 17 points, five rebounds and had three assists, while Ramsey added 13 points and Moretti had 11. Holyfield is now averaging 9.6 points per game overall and 10.3 per conference game.

“I thought Holyfield has played really good,” Beard said. “He played with a lot of courage against Kansas, and to duplicate that tonight back to back games is great. He really works hard on his craft. It is good to see him out there playing confident.”

Edwards was 3-for-4 from beyond the arc for his fifth game this season with three or more 3-pointers and was 7-for-10 from the field. Moretti added three assists to his 11 points, while Ramsey was 5-for-10 from the field and 2-for-4 on 3-pointers. Kevin McCullar led the Red Raiders with seven rebounds and added six points off the bench after missing the last two games in concussion protocol.

“Coach talked about finishing all this week, so you know we tried to do our best finishing the game, getting to the foul line, knocking down free throws, and finishing,” Edwards said. “I just tried to make the right play every time and come up with the ball screens, reading defense, and I just tried to fill in the spots and make open shots.”

Tied at 56 with 4:50 remaining after an Austin Reaves 3-pointer for the Sooners, the Red Raiders took the lead on a Ramsey free throw that was followed by a Ramsey 3-pointer. Edwards pushed the lead to 62-56 with a layup to cap a 6-0 run and the Red Raiders were up 64-58 on a pair of Moretti free throws with 1:39 remaining. Tech finished the game on a 5-0 run with Holyfield hitting a runner and two free throws to cap it.

Brady Manek led Oklahoma with 19 points and Austin Reaves had 16, while Kristian Doolittle led the team with 11 rebounds to go along with eight points. The Sooners finished the game shooting 44.6 percent from the field and were 6 of 24 on 3-pointers.

Oklahoma led 31-30 at halftime after shooting 48.0 percent from the field, while the Red Raiders were at 6-for-12 on 3-pointers but 40 percent from the field. Holyfield led Tech with eight points at the break after hitting a pair of 3-pointers and also had three rebounds. Edwards finished the first half with seven points and three assists, while McCullar came off the bench to provide six points in eight minutes of play. Moretti and Ramsey had one 3-pointer each in the opening half and had five and three points, respectively. Tech had an early 11-7 lead on Moretti’s 3-pointer but saw OU go on a 7-0 run before fighting back to take a 21-19 lead on a Ramsey jumper with 5:52 remaining. Tech led again at 26-25 with McCullar hitting a free throw and then closed to within one with McCullar drilling a 3-pointer with 11 seconds remaining for the final points of the first half.

Picking up a nice home win heading into the second half of the league schedule. 😤