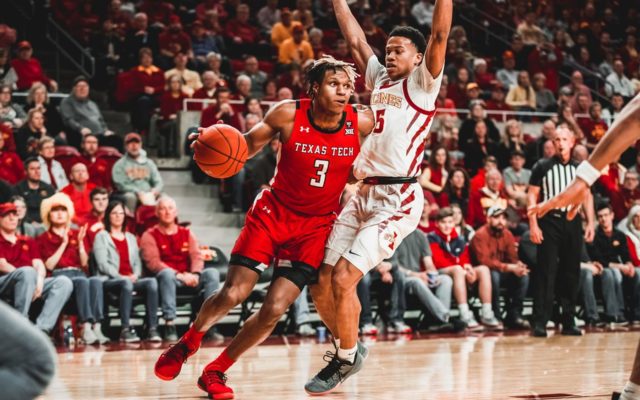 AMES, Iowa – Texas Tech freshman Jahmi’us Ramsey had a career-high seven assists and scored 25 points, Kyler Edwards added 19 points and Kevin McCullar had a career-high 11 rebounds to help lead the Red Raiders to an 87-57 win over Iowa State on Saturday at Hilton Coliseum.

The Red Raiders (18-9, 9-5 Big 12) swept the regular-season series against the Cyclones (11-16, 4-10 Big 12) for the first time in program history and have now won five of their last six games going into a Tuesday night matchup against Oklahoma in Oklahoma City. Tech, which now has three conference wins by a 30-plus margin following a game where the Red Raiders shot 57.1 percent from the field with nine scorers, jumped out to a 51-35 lead at halftime by shooting 72.0 percent from the field, 62.5 percent on 3-pointers and 90.9 percent from the line (10 of 11) in the first half and finished 32 of 56 from the field, 17-for-19 at the line.

Ramsey also had a career-high by making 11 shots in the game and would finish at 50 percent from the field and with five rebounds and two steals. Edwards added 19 points after going 7-for-10 from the field with two 3-pointers to go along with hitting 3 of 3 from the line. Edwards added four assists and five rebounds in the 30-point win and McCullar recorded a career-high with 11 rebounds in his second appearance in the starting lineup. McCullar added six points to go along with his rebounding performance that included three on the offensive side. TJ Holyfield finished the game with 10 points, Davide Moretti had nine with one 3-pointer and Terrence Shannon, Jr. had a career-high four steals and also contributed seven points.

Up 16 at halftime, Tech continued dominating in the second half and were shooting over 70 percent from the field, 70 percent on 3-pointers and over 90 percent from the line five minutes into the second half when Edwards made a layup to give the team a 61-43 advantage. The Red Raiders put the exclamation on it with a 10-0 run that started on a McCullar second-chance basket and was capped by a pair of Ramsey layups that gave them a 75-50 lead. The run ended on a pair of ISU free throws but was followed by an Edwards 3-pointer to push the Tech advantage to 26 points with 5:35 remaining.

Texas Tech finished the game 6-for-16 on 3-pointers (37.5 percent) and owned a 34-30 rebounding advantage, a 46-22 scoring advantage in the paint and had 15 assists and only 12 turnovers. The Red Raiders have now won three in a row over Iowa State and completed a season sweep that began with a 72-52 win at home on Jan. 18. Tech, which outscored ISU 36-22 in the second half, is now 13-5 at the Hilton Coliseum and has now swept ISU and Kansas State this season. The Red Raiders improved to 3-4 on the road in conference play and remains in third place in the Big 12 standings behind Baylor (13-1) and Kansas (13-1) and ahead of West Virginia (7-7).

Solomon Young led Iowa State with 16 points by going 5-for-6 from the field and 6 of 6 at the line, while Rasir Bolton scored 13 with two 3-pointers. Michael Jacobson added 10 rebounds and six points for the Cyclones who were limited to 35.8 percent shooting that included going 4-for-14 on 3-pointers. The Cyclones finished the game 15-for-23 from the free-throw line (65.2 percent) and with 15 turnovers.

Ramsey was one point shy of his Big 12 high of 26 that he scored at Kansas and two away from his career-high of 27 that he dropped on Long Island in the non-conference schedule. A freshman from Arlington, Ramsey is now scoring 16.3 points per game this season for the Red Raiders which puts him second in the conference behind only Devon Dotson who is scoring 18.2 points per game for the Jayhawks. He has scored 20 or more points in seven games this season and in four conference games and leads the conference by shooting 44.9 on 3-pointers after going 2-for-5 against the Cyclones. McCullar had a previous career-high of seven rebounds in the first matchup against Oklahoma and is now averaging 10.0 points and 6.5 rebounds in the past four games.

Texas Tech led 51-35 at halftime with seven players scoring and the team shooting 72.0 percent from the field with five 3-pointers. The Red Raiders, who were 18-for-25 from the field after 20 minutes, were also 10-for-11 at the free-throw line while limiting the Cyclones to 39.4 percent shooting with only three 3-pointers. Ramsey led Tech with 12 points and four assists in the opening half after hitting two 3-pointers and Edwards had 10 points by going 3-for-4 from the field and 3-for-3 at the free-throw line. Moretti finished the first half with nine points after going 3-for-4 from field, while Shannon came off the bench to provide seven points on 3-for-3 shooting. Tech led by as many as 22 points in the game after going on a 9-0 run that included seven points from Ramsey who hit a 3-pointer with 8:41 on the clock for a 26-18 lead. The lead swelled to 43-27 with another Ramsey 3-pointer with 3:20 remaining after a Edwards 3-pointer and Shannon dunk. ISU trimmed the first-half margin by going on an 8-0 run before Holyfield gathered a loose ball and made a layup with a second to play. Young led ISU with 10 points at halftime, while Bolton had eight for the Cyclones.

The Red Raiders will now take on Oklahoma on Tuesday at the Chesapeake Energy Arena in Oklahoma City. Tech earned a 69-61 win over the Sooners in the first matchup on Feb. 4 at the United Supermarkets Arena in Lubbock to extend a four-game winning streak in the series. The teams will play in the home of the Oklahoma City Thunder for the first Big 12 regular-season game in an NBA arena.